What will happen to the Surfside building collapse site? 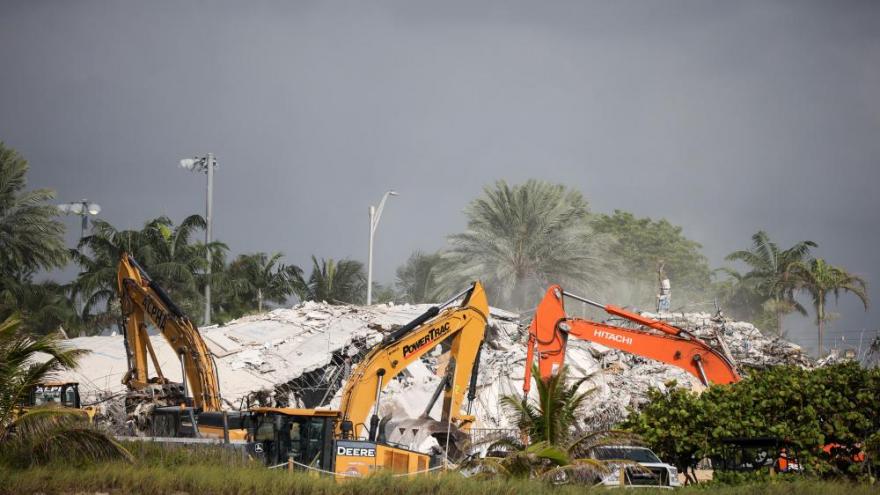 Rescue workers use excavators to dig through the rubble of the collapsed 12-story Champlain Towers South condo building on July 9 in Surfside, Florida.

The advertising executive escaped from his Surfside, Florida, condo building with just a few items in a paper bag -- including a T-shirt, pants and his wallet.

Rosenthal now lives in a hotel paid for by friends and wears donated clothes. And he's worried about what's in store for the site of the collapse, which has killed at least 97 people.

Rosenthal still owes money on the two-bedroom condo he bought 20 years ago, and wants a solution that provides the fastest financial recovery for the survivors and victims' families.

"I lost everything, my life is totally upside down, people I called friends are gone," he told CNN. "I'm 72 years old, I can't spend what's left of my life trying to rebuild. Whatever they do, they just need to compensate people."

He also would like to see some sort of memorial at the site to honor the lives of those lost.

But resolving the long-term future of the property -- the site of a deadly disaster that also happens to be valuable beachfront real estate -- will likely be complicated. And judging by what's happened at the sites of other mass tragedies, it will take some time.

Some survivors don't want to rebuild

The site has been mostly cleared and its debris relocated to a collection site as evidence for investigations into the collapse.

Miami-Dade Circuit Judge Michael Hanzman has appointed a receiver, attorney Michael Goldberg, to oversee the complicated legal and financial issues involved and explore the land's value as a potential source of compensation for the victims.

Hanzman also ordered the start of the process to sell the land, which could fetch up to $110 million, said Christina Pushaw, a spokesperson for Florida Gov. Ron DeSantis. The judge said this week that proceeds from the sale should go directly to the survivors and victims' families.

Some relatives of victims have said they don't want another condo building erected on the site.

"I'm not saying to not sell the land. The land needs to be sold and we need to be compensated for what happened," Martin Langesfeld, whose sister died in the collapse, told CNN affiliate WFOR.

But Langesfeld said he'd prefer to see Miami-Dade County or another government agency buy the land and not build new condos on it so that "the victims' families get the dignity and respect we're looking for."

He added, "Would you want to live where your family died?"

Soriya Cohen, whose husband, Brad Cohen, perished in the condo collapse, also said she doesn't want a new building erected on the property. Instead, she said, the whole site should be set aside as a memorial for those who died.

"I can't even imagine such a desecration. Imagine if that was your spouse, your parent or your grandparent and to make money, they built on top of it," Cohen told CNN affiliate WPLG. "I'm asking people to respect that and respect the families and the people who have already suffered so much and not to add to our pain."

Cohen's concerns are partly rooted in the Jewish tradition of respect for the dead and the sanctity of burial sites. Many of the building's victims were Jewish.

But under Jewish burial laws, the site would not be considered sacred if human remains found there were relocated, said Michael Berenbaum, a Los Angeles rabbi and Jewish scholar who focuses on memorials.

Berenbaum said that what ultimately becomes of the property "is a social and political decision, not a religious decision."

But others want new homes on the site

In a sign of how divisive the issue is, several condo owners asked the judge at a hearing this week to allow a developer to erect a new building on the site.

Beachfront residential property is highly sought after in the tropical community of about 5,800 people, where palm trees dot the streets.

"Some people want a memorial, but there's a remainder of people who owned homes there who want to go back to the site," Surfside Mayor Charles W. Burkett said. "The challenge will be balancing both of those interests. We understand that very well, and the receiver is hypersentisitve to the needs of those who lost loved ones."

The process of determining what happens to the site will be based on three steps. Goldberg, the receiver, will determine what the majority of the condo owners want and issue recommendations to the judge, who will ultimately make the final decision, said Burkett, the mayor.

State officials won't have any say in it, according to DeSantis' office.

"It's not up to the state how the land is used, because it's not public land," said Pushaw, the governor's spokesperson. "Survivors have expressed different opinions about what to do with the land, with some suggesting that it should be sold to local or state government, and some wanting to sell to a private developer to rebuild on the site so they can move back to the place they still consider their home."

Burkett said he's been in constant conversations with the victims' families. One option could be a compromise -- a memorial alongside a new residential building for people who wish to return to living at the site, he said.

Burkett added that his preference will come down to the receiver's recommendation, based on conversations with the victims' loved ones.

Hanzman, the judge, has said he expects the cases to be wrapped up within a year.

Other sites of mass tragedies have been converted to memorials

Over the years the sites of other mass tragedies, such as the 9/11 attack on New York's Twin Towers and the 1995 Oklahoma City bombing, have been redeveloped as memorials to the dead.

A memorial also stands in a plaza in Kansas City, near where 114 people were killed in 1981 when two overheard walkways collapsed at the Hyatt Regency hotel. The hotel was renovated and renamed but remains operational.

But such memorials can involve a patchwork of local, state and federal recommendations, and take years to implement.

Residents of Newtown, Connecticut, just voted this spring to build a memorial to the 26 people killed by a mass shooter in 2012 at Sandy Hook Elementary School.

In Las Vegas, where a 2017 shooting at a country music festival left 58 people dead, plans for a memorial are still in the works almost four years later.

And last month, the US Senate passed a measure designating the site of 2016's deadly Pulse nightclub shooting in Orlando as a national memorial. "Pulse nightclub is hallowed ground," said President Joe Biden, who signed the bill days later.

Despite calls to turn the Surfside site into a memorial, the survivors and families of the victims will not be asked to donate their shares of the property, Judge Hanzman said.

"These victims who have lost their homes, their personal belongings, and in many cases their lives are not going to be sacrificing the value of their real estate for the public good," said Hanzman, who is overseeing the civil lawsuits filed in the wake of the collapse.

"This court's task and your task is to compensate the victims of this tragedy, period," he told attorneys at a hearing this week.

Whatever happens, he won't move back to the Surfside site

Meanwhile, Rosenthal and other survivors of the collapse are trying to rebuild their lives.

He's one of dozens of people getting help from the Global Empowerment Mission, which is distributing funds, housing relief and gift cards to survivors. His friends have also set up a GoFundMe to help him get back on his feet.

Rosenthal can't forget that terrifying night on June 24 when he woke up to a thunderous sound, thinking he was dreaming about a California earthquake. With his unit shaking and his bed rocking, he realized it was real when dust floated down from the ceiling onto his face.

He said he could hear his neighbors screaming, "Help! Help!"

"I ran outside to the balcony to see what's on fire. I get hit with a plume of smoke that knocks me out. I thought, 'Whatever this is, Rosenthal, you're in it now.'"

He also remembers the agonizing minutes spent waiting on his balcony to be rescued.

In between searches for a new home, Rosenthal now attends Zoom court hearings about what will happen to the land where his building once stood.

Regardless of what the court decides, he said he hopes to find a new home a few miles away in Miami Beach. He has no plans of moving back to the site of Champlain Towers South.