What we know so far about the Robert Kraft investigation 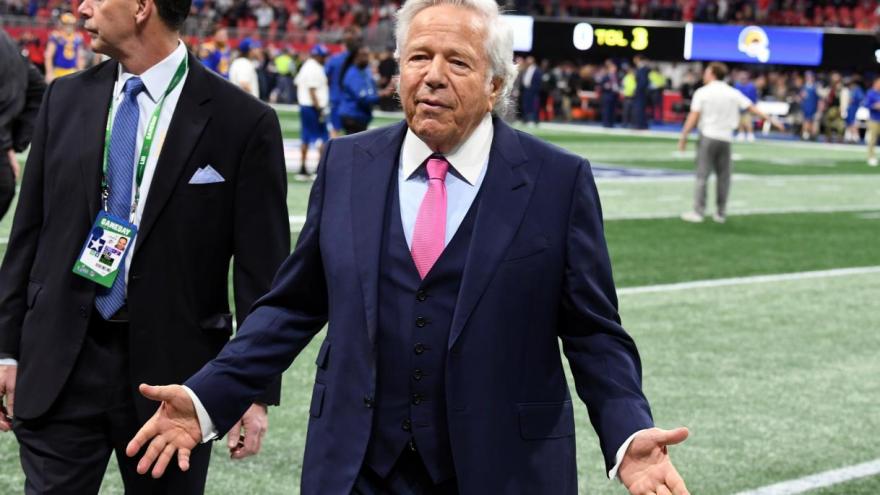 Robert Kraft, the owner of the New England Patriots, has been arrested as part of a monthslong investigation into sex trafficking that focused on several central Florida day spas and massage parlors suspected of being used for prostitution.

(CNN) -- Robert Kraft, the owner of the New England Patriots, has been charged as part of a monthslong investigation into sex trafficking that focused on several central Florida day spas and massage parlors suspected of being used for prostitution.

Kraft faces two counts of soliciting someone to commit prostitution -- including one count for an alleged offense on January 20, the day his Patriots played in the AFC Championship Game. He denies the accusations.

Here's what we know so far about the case:

What do we know about his travel, the days he allegedly visited spa?

• Around 4:45 p.m. ET, Kraft goes to the Orchids of Asia Day Spa in Jupiter, police say. He stays about 40 minutes and pays for a sexual act that was recorded on surveillance camera, the probable cause affidavit says.

• At 10:59 a.m. ET, Kraft returns to the spa, according to the affidavit. Another paid sexual act is caught on camera, police say, and Kraft leaves the spa 14 minutes after he arrived.

• At 5:40 p.m. local time (6:40 p.m. ET), the AFC Championship Playoff Game between the Patriots and the Kansas Chiefs is scheduled to start at Arrowhead Stadium in Kansas City. The Patriots win and advance to the Super Bowl.

What has been Kraft's response?

A spokesperson for Kraft said, "We categorically deny that Mr. Kraft engaged in any illegal activity. Because it is a judicial matter, we will not be commenting further."

What is the possible punishment for a conviction?

Under Florida law, the charge of soliciting someone to commit prostitution is a first-degree misdemeanor.

Should there be a conviction, it is punishable by up to one year in jail, a $5,000 civil penalty and a mandatory 100 hours of community service and educational program on the negative effects of prostitution and human trafficking.

A state health department inspector reported that the the Jupiter spa housed two rooms with beds, sheets and pillows, an affidavit said. There were also dressers containing medicine and clothing, as well as a refrigerator with food and condiments, it said.

As further proof that the spa was a sex business, a search of a dumpster behind the spa uncovered a ripped-up ledger, credit card receipts and napkins wet with semen, the affidavit said.

Martin County Sheriff William Snyder said it appears women were living in the spa. They cooked on the back steps of the spa and slept on the massage tables, he said.

The women didn't have access to transportation and were moved from location to location, with some averaging as many as eight clients a day, he said. They worked late into the night with no days off, the sheriff said.

Further surveillance showed an all-male clientele staying for brief periods of time. Police also conducted traffic stops on customers leaving the business, who confirmed they had not patronized the day spa for its advertised services, the affidavit said.

What evidence do police have?

On January 17, covert surveillance equipment was installed at the spa as part of the investigation, the affidavit states.

On January 19, the cameras show Kraft visited the spa and paid for services in cash at the front desk, and he was then taken to a massage room, undressed and lay on a massage bed, the affidavit said. A female employee can be seen on the video manipulating his genitals and later wiping Kraft's genitals with a towel, according to the affidavit.

Kraft left the facility and got into a white Bentley, and police then conducted a traffic stop on the vehicle and confirmed his ID, the affidavit states.

On January 20, Kraft again went to the spa, the affidavit said. Video showed him laying naked on a bed and a woman manipulating his genitals and then using a towel to wipe near his genitals, the affidavit says. Kraft gave her a $100 bill plus at least one other unidentifiable bill and left the room at 11:13 a.m., according to the document.

Have other people been charged?

As many as 200 alleged johns have been or will be arrested and authorities have seized at least $2 million in assets, Sheriff Snyder said. He called the investigation "the tip of the tip of the iceberg."

Will other charges be filed?

Dave Aronberg, the state attorney for Palm Beach County, said that no charges of human trafficking had been brought in any of the cases, but that could change in the future, depending on what investigators find.

CORRECTION: A previous version of this story incorrectly stated Kraft was arrested. He's been charged.