What we know so far about the California oil spill 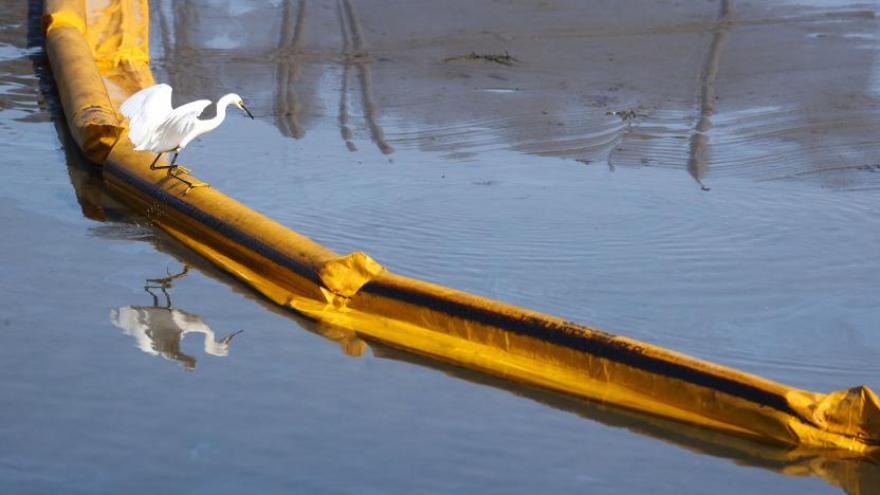 A bird balances on a boom, a temporary floating barrier to contain oil that seeped into Talbert Marsh, home to around 90 bird species, after a 126,000-gallon oil spill from an offshore oil platform on October 3.

(CNN) -- A leak in an oil pipeline caused a major spill off the coast of Southern California, sending oil spewing into the local environment and potentially harming wildlife and nearby human residents.

The volume of the spill pales in comparison to some of the US' largest such incidents, such as the 1989 Exxon Valdez oil spill and the 2010 Deepwater Horizon spill, although the full extent of the spill won't be known for several weeks, one local official said.

On Monday, Gov. Gavin Newsom proclaimed a state of emergency. "The state is moving to cut red tape and mobilize all available resources to protect public health and the environment," he said in a statement.

Here is what we know so far about the spill and its resulting impact on the local environment and nearby residents.

Where is the spill?

The breach occurred about 5 miles off the coast of Huntington Beach in Orange County, local officials said.

The oil spill is the equivalent of an estimated 3,000 barrels -- or 126,000 gallons -- of post-production crude, though the city of Huntington Beach said the spill could be as much as 144,000 gallons.

The size of the spill was reported to be about 13 square miles, the Coast Guard said Sunday.

By midday Monday, about 4,158 gallons of oil had been removed from the water and 8,700 feet of oil boom -- a term for floating barriers designed to contain an oil spill -- were deployed, the US Coast Guard said.

When did the leak start?

It's not clear when the leak began but authorities were notified late Friday of reports of an oil sheen, more than 12 hours before Amplify Energy, the owner of the line, reported it to state and federal officials, according to documents reviewed by CNN.

In an interview with CNN on Monday, Amplify CEO Martyn Willsher said a sheen was detected by company personnel Saturday morning, not Friday night.

Willsher said while there is equipment to detect the leak without visibly seeing oil spills, there were no notices of a potential leak in the line before Saturday.

What was the cause?

An anchor hooking an oil pipeline may have caused the spill, the federal Pipeline and Hazardous Materials Safety Administration said in a notice to Amplify Energy. But no cause has been officially confirmed.

"The pipeline has essentially been pulled like a bow string. And so at its widest point is about 105 feet away from where it was. So it is kind of an almost a semicircle," Willsher said at a press conference Tuesday.

There is no confirmation of a vessel above the site of the spill, but a response team is working with other agencies to determine whether a ship was in the area, said Capt. Rebecca Ore, the commanding officer at US Coast Guard Sector Los Angeles-Long Beach.

Authorities said a 4,000-foot section of the pipeline was displaced laterally about 105 feet and had a 13-inch split that was likely the source of the spill.

"These ships are anchored and many are awaiting entry into the San Pedro Bay Port complex -- the ports of Los Angeles and Long Beach -- and in the course of transit it is possible that they would transit over pipeline," Ore said Monday.

Amplify's pipeline was due for another inspection at the end of this month, Gov. Newsom said Tuesday. While there were no issues with the pipeline during previous inspections, officials are going back to the details of those reports.

What's the impact so far?

The oil spill has coated nearby areas with oil, shut down beaches, threatened wildlife habitats and potentially harmed people.

Sections of the shoreline at Huntington Beach were closed this weekend, Orange County health officials advised residents to avoid recreational activities on the coastline, the city of Laguna Beach closed its beaches Sunday night and Newport Beach advised people to avoid contact with ocean water and beach areas impacted by oil.

The extent of the ecological damage remains to be seen.

"The oil has infiltrated the entirety of the (Talbert) wetlands. There's significant impacts to wildlife there," she said. "These are wetlands that we've been working with the Army Corps of Engineers, with (a local) land trust, with all the community wildlife partners to make sure to create this beautiful, natural habitat for decades. And now in just a day, it's completely destroyed."

Speaking to CNN on Monday, Foley noted the extent of the damage won't be known for another couple of weeks.

Field teams in the area of the spill have found four birds injured by oil, a number an official said was not as bad as anticipated.

"In our initial assessment of the area, the number of birds in the general area seems to be lower than we had feared," said Dr. Michael Ziccardi, a veterinarian at UC Davis and the director of California's Oiled Wildlife Care Network. "At this point, we're cautiously optimistic related to the number of animals that might be affected."

Amplify Energy is a small, independent company with 222 employees as of the end of 2018, the last time it reported its staff size in a company filing. Its most recent financial report shows sales of $153 million, with year-to-date losses of $54.4 million through the end of June.

The company was working with local, state and federal agencies on recovery efforts, said Willsher, the Amplify executive.

"Our employees live and work in these communities, and we're all deeply impacted and concerned about the impact on not just the environment, but the fish and wildlife as well," he said. "We will do everything in our power to ensure that this is recovered as quickly as possible, and we won't be done until this is concluded."

The facilities operating the pipeline were built in the late 1970s and early 1980s, and are inspected every other year, including during the pandemic, he said.