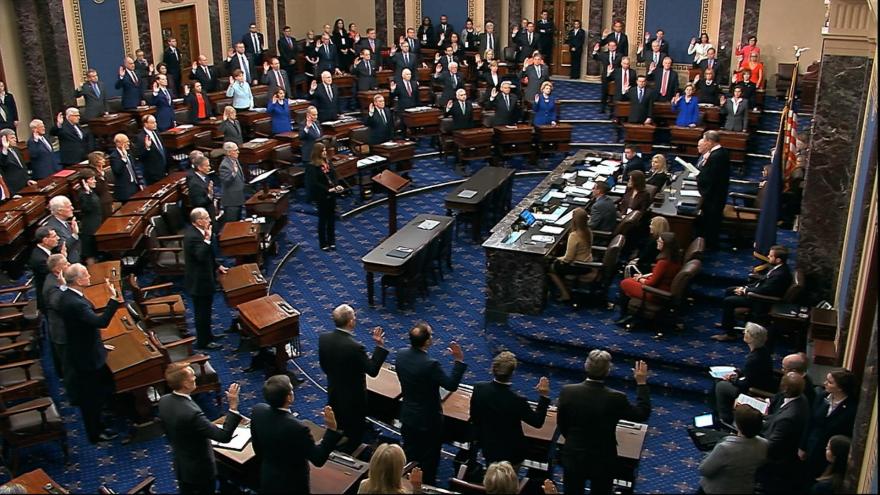 In this image from video, presiding officer Supreme Court Chief Justice John Roberts swears in members of the Senate for the impeachment trial against President Donald Trump at then Capitol in Washington on Jan. 16, 2020. The trial starts in earnest on January 21, 2020, when Republicans and Democrats are expected to battle over a resolution setting the rules for the trial and shortly after start opening arguments.

(CNN) -- Chief Justice John Roberts swore in senators last week to officially begin the impeachment trial of President Donald Trump, but the trial starts in earnest Tuesday afternoon, when Republicans and Democrats are expected to battle over a resolution setting the rules for the trial and start opening arguments shortly afterward. Senate Majority Leader Mitch McConnell will propose a timeline for the trial that would break from the impeachment trial of President Bill Clinton, according to a four-page organizing resolution obtained by CNN.

It's possible senators will vote to go into closed session in order to debate the issues that divide them because impeachment rules prevent them from speaking publicly during the trial.

When will the trial get started?

The trial will start Tuesday at 1 p.m. ET, after which it will run six days a week, Monday through Saturday, also starting at 1 p.m. The condensed timeline for opening arguments proposed in McConnell's resolution raises the prospect that the trial, at least in its first week, will feature 12-hour days and stretch late into the night.

The first session on Tuesday, when they deal with the organizing resolution, may go past 6 p.m., according to aides in each party.

The Senate will come into session at noon ET on each trial day, and there will be time for leadership remarks and possibly some legislative action before 12:30 p.m., when preparations will be made for the trial to get underway.

McConnell, a Kentucky Republican, plans to give House impeachment managers and Trump's legal team each 24 hours divided over two days for their opening arguments, according to the resolution. The move indicates that Senate Republicans are pushing to finish the trial as quickly as possible -- potentially ahead of the President's February 4 State of the Union address. If the Senate doesn't agree to call any witnesses or subpoena any documents, Trump could even be acquitted by the middle of next week.

We won't know exactly what the schedule will be for the trial until senators pass the organizing resolution, which could happen Tuesday.

Each side having up to 24 hours to do opening arguments follows the model from Clinton's trial -- although the 24 hours were split over a four-day period then -- as McConnell had previously said he wanted to do. After that, there would be up to 16 hours for senators to ask questions, which would be submitted in writing. But the two sides don't have to use their full 24 hours, which could cut time from the opening arguments.

The Senate convenes Tuesday at noon for leadership remarks and will adjourn at 12:30 p.m. to prep the floor for the trial.

At 1 p.m., the trial convenes and there are expected to be a few housekeeping items -- including swearing in Sen. Jim Inhofe, R-Oklahoma, who missed last Thursday's session because of a family medical issue.

After that, senators are expected to turn to a debate over the resolution from McConnell that will set the rules of the trial. The debate will last two hours equally divided on both sides. It is expected the debate won't take place between senators -- who are not allowed to speak at the trial -- but between the House impeachment managers and the President's defense lawyers.

Then Senate Minority Leader Chuck Schumer, a New York Democrat, will offer an amendment. While it's unknown what it will say, Schumer's plan is likely to call either for witnesses generally or for a specific witness to be called to testify, as well as documents to be produced.

Will we see witnesses?

McConnell's organizing resolution puts off the question of witnesses until after the two sides present their opening arguments and there are 16 hours of questions for senators, which they will ask through Chief Justice John Roberts.

At that point, the resolution includes a proposal in which the Senate would vote on a motion on "whether it shall be in order to consider and debate under the impeachment rules any motion to subpoena witnesses or documents."

Democrats don't want to wait that long to resolve the witness issue and plan to force early debate and votes on the question by pressing for amendments to the organizing resolution. Most Republicans, including key swing votes like Sen. Susan Collins of Maine, Sen. Lisa Murkowski of Alaska and Sen. Mitt Romney of Utah, say they won't even consider calling witnesses until after the opening arguments so this effort by Democrats appears poised to fail, although it will draw attention to their push for new testimony.

Fifty-one senators have to vote for witnesses, so if all 47 Democrats are unified, only four Republicans would need to support it to pass. It's still an open question if those three Republicans vote to hear witnesses, if they can also wrangle a fourth as well.

Will the entire trial be open to the public?

The Senate may go into closed session at certain times because impeachment trial rules prevent senators from speaking. During the Clinton trial, some of this was done in the Old Senate Chamber down the hall from the Senate chamber but this time they plan to stay on the Senate floor. We have no idea how long these closed sessions could last. But it's possible to happen Tuesday and then again after the opening arguments and questions.

In fact, the reason Senate authorities are planning to put metal detectors where the press enter the chamber -- something that has rankled the Capitol press corps -- is because they want to ensure no devices are left in the chamber that could record those closed sessions, according to a Republican aide.

How long will the trial go?

Entirely unknown right now, especially with Republicans considering condensing the schedule. Some of Trump's supporters are hoping the trial will be done by the time he is scheduled to address the Congress and the nation with his State of the Union address on February 4.

How will evidence be handled?

The resolution does not automatically admit the House's evidence that has been submitted to the Senate, and instead allows for a vote on whether the evidence should be admitted for the trial. A Senate GOP leadership aide said the evidence in the Clinton trial was different from the House's in this case, because it came from a federal grand-jury process, and not the impeachment inquiry where Republicans say the President was denied due process.

For any new evidence that surfaces to be admitted and presented during the trial, 51 senators would have to vote to approve it. But if any senator or Trump's legal team objects -- Roberts could either rule on it or punt it back to have senators vote to decide. Senators could also overrule the chief justice.

Most Senate Democrats appear to be unified on wanting to include any new pertinent evidence or materials about the President's dealings in Ukraine that emerge after the start of the trial. On the other side, many Senate Republicans have said they don't want to consider new evidence and blame the House for not conducting a complete investigation before impeaching Trump.

Who will make the case to convict or acquit the President?

House impeachment managers will act as prosecutors making the case against Trump, and White House legal counsel Pat Cipollone will lead a team of lawyers that the President selected to defend him and make the case for his acquittal, with Roberts presiding over the chamber.

The impeachment managers were announced by Speaker Nancy Pelosi last Wednesday and include House Intelligence Chair Rep. Adam Schiff of California as the lead manager. The other six will be:

On the other side, Trump's defense team, led by Cipollone, will make the case for his acquittal. Cipollone will be joined by lawyer Jay Sekulow, and according to people familiar, Trump will add to his defense team constitutional lawyer Alan Dershowitz, Bill Clinton special prosecutor Ken Starr and Robert Ray, who was also part of Clinton's impeachment prosecution team. Two other lawyers assisting the team are Former Florida Attorney General Pam Bondi and Trump's longtime personal counsel Jane Raskin.

Additionally, the White House announced on Monday members of Congress who would "serve as part of his team working to combat this hyper-partisan and baseless impeachment," according to a press release. Those eight Republican members, who have all staunchly defended the President, will be:

Will the Senate still conduct any legislative business?

It's possible some legislation business could be conducted between noon and 12:30 p.m. ET each day they are in session.

The only measure that's out there that appears ready to get a vote is Sen. Tim Kaine's war powers resolution. It is a privileged motion, so the Virginia Democrat can force a vote on it. It's expected to legislatively "ripen" this week so a vote is possible, but not set.

UPDATE: This story has been updated after CNN reported the contents of McConnell's proposed rules for the trial.