What we know and don't know about quarterback Dwayne Haskins' death 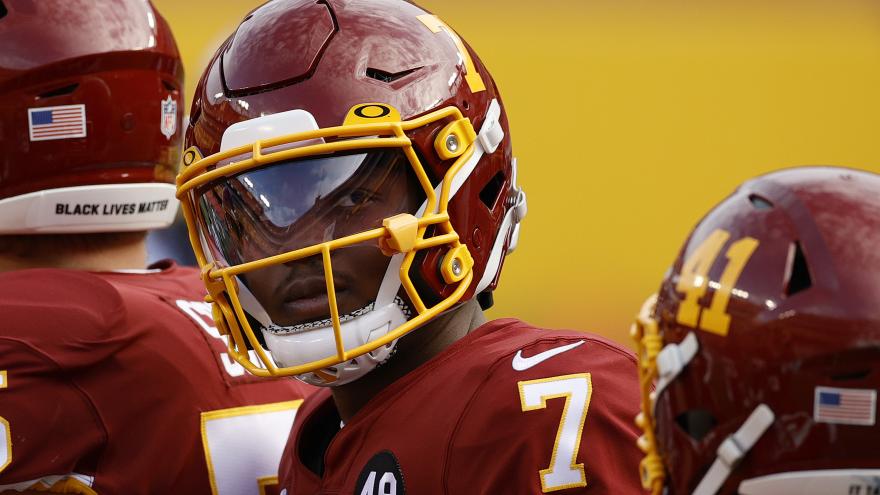 (CNN) -- Pittsburgh Steelers quarterback Dwayne Haskins died when he was struck by a dump truck Saturday morning as he tried to cross a highway on foot in South Florida, authorities said.

Authorities have so far released few details about the circumstances of his death. Here's what we know and don't know about the fatal crash, his short-lived career and how those who knew him have reacted.

Haskins was trying to cross Interstate 595's westbound lanes, near the Fort Lauderdale-Hollywood International Airport in Broward County, when the dump truck hit him, the Florida Highway Patrol said.

The incident was reported shortly after 6:30 a.m., the patrol said. He had been "walking on (the highway) for unknown reasons," the patrol said in a news release.

Further details about what led up to the incident were not available.

In recent days, Haskins was in South Florida working out with some Steelers teammates, as captured in Instagram stories from Haskins and running back Najee Harris.

Haskins, a reserve for the Steelers last season, was poised to enter his fourth year in the NFL.

Washington selected Haskins as the 15th overall pick in the 2019 NFL Draft, but he didn't live up to his lofty status. He played 16 games across two seasons for Washington, compiling a 3-10 record in 13 starts.

Haskins was released in December 2020 toward the end of his second season after he was benched in a loss and after he was fined an undisclosed amount for violating team Covid-19 protocols by going maskless at his girlfriend's birthday party.

Last month, Haskins re-signed with the Steelers for one year was set to compete with Rudolph and new Steelers acquisition Mitchell Trubisky for positions on the depth chart.

Haskins' family will hold multiple services next weekend to honor him, with a memorial service to be held in Rockaway Township, New Jersey where Haskins was born and raised until high school on April 23.

The following day, a vigil will take place at the high school Haskins attended in Potomac, Maryland.

The family chose to have multiple services "in order to share their son's memory with family, coaches, teammates and childhood friends."

"We have had such an overwhelming outpouring of love for our son since the news broke of our loss," Tamara and Dwayne Haskins, Sr., parents of Haskins, said in a statement on Tuesday.

"Anyone who knew Dwayne, knows he worked exceptionally hard to achieve such a high level of success at such a young age. He was touched by so many people on his journey to being a standout athlete and we are grateful to all of them. This pain is unimaginable and we appreciate everyone who shares in our heartbreak."

How teammates and coaches are remembering him

Teammates and coaches who knew Haskins offered their condolences and remembrances since his death.

Ohio State coach Ryan Day said Monday members of the team were hurting and announced they will honor Haskins at its spring game on Saturday.

"When you think about Dwayne you just think about the compassion he had, certainly for all of his teammates and his friends. He always took time after practice to be around family members, kids," he said. "He meant a lot to my family and he meant a lot to this program, and he's going to be sorely missed.

"It's so close to Saturday morning right now. It's still hard to kind of get our feet underneath us and see clearly right now. We all are hurting," he added.

Steelers defensive tackle Cameron Heyward tweeted "Dwayne meant so much to so many people."

Haskins' head coach in Washington, Ron Rivera, said Saturday he was "absolutely heartbroken" to hear of his former player's passing.

Steelers wide receiver Chase Claypoolremembered Haskins' selflessness in his final interaction with him.

"I spent your final moments with you and I can't help but think about how selfless you were in those moments. All you cared about was making sure that everyone around you was okay and I can't thank you enough for that. You are what I strive to be," Claypool tweeted.

Roethlisberger said on Twitter although he only knew Haskins for a short time, he knew him to be "a young man that didn't seem to ever have a bad day."

"He came to work everyday with a smile on his face and energy and love in his heart. I really enjoyed his passion and love for the game and wanting to learn and be the best. His smile and zeal for life will be missed!," Roethlisberger said. "I'll say it again just like I told you to your face, I still wish I could throw the ball like you," he added.