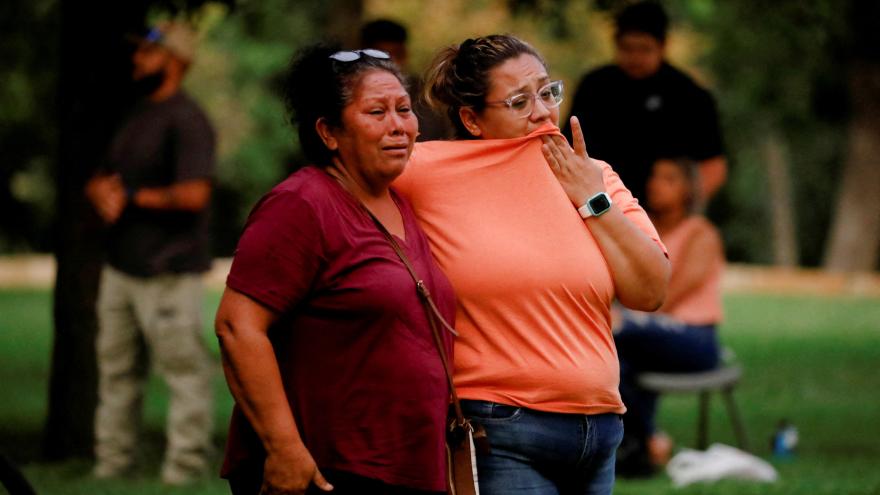 (CNN) -- Nineteen children and two adults were killed in a mass shooting at an elementary school in Uvalde, Texas, Tuesday in what is now the second deadliest school shooting in the US.

The 18-year-old shooter, identified by officials as Salvador Ramos, was shot and killed by responding law enforcement. He arrived at Robb Elementary School with a long rifle and wearing body armor, according to Sgt. Erick Estrada with the Texas Department of Public Safety.

The school teaches second through fourth grades and had 535 students in the 2020-21 school year, according to state data.

Hours after the shooting Tuesday, parents were desperately waiting at a civic center near the school to find out if their children had survived. Some told CNN they gave their DNA to help identify the victims.

Here's what we know about the shooting, which happened two days before summer break.

Ramos shot his grandmother Tuesday morning before arriving at the school, Estrada said, and police had been called to her home to investigate. She was in critical condition late Tuesday, Estrada said.

After that, police received another report around 11:30 a.m. that a vehicle had crashed into a ditch near the elementary school, Estrada said. Police believe Ramos was driving that vehicle, which became disabled inside the ditch.

Following the crash, Ramos exited the vehicle with a rifle in hand and wearing a bulletproof vest, Estrada said.

"He was engaged by an Uvalde ISD police officer who works here at the school. And then after that, he was engaged by two other officers from the Uvalde Police Department," Estrada told CNN's Don Lemon. The officers weren't able to stop Ramos, so they asked for assistance from a tactical agency, Estrada said. "A tactical agency came in and was able to eliminate the threat and bring the suspect down," he added.

Officials have not been clear on how Ramos managed to get past the officers and open fire in several classrooms. The cause of the crash before he entered the school also remains unclear. There were no reports from law enforcement that Ramos was being pursued prior to the crash, Estrada said.

More than 20 US Customs and Border Protection agents responded to the scene and provided aid, a law enforcement official said. A CBP agent was injured in the response but is stable, the official said.

The agents and other law enforcement officers took fire from the shooter, who had barricaded himself, Department of Homeland Security spokeswoman Marsha Espinosa tweeted. "Risking their own lives, these Border Patrol Agents and other officers put themselves between the shooter and children on the scene to draw the shooter's attention away from potential victims and save lives," she wrote.

A motive for the shooting is unclear at this time, Estrada said.

What we know about the victims

Parents and loved ones waited in agony for hours Tuesday at a civic center-turned-reunifcation center for any information on their children.

"We see people coming out just terrorized. They're crying one by one. They're being told that their child has passed on," State Sen. Roland Gutierrez told CNN Tuesday night from the civic center.

Outside the civic center, a father who had learned his child was dead fought tears as he was embraced by his cousins, according to CNN's Nicole Chavez.

A few yards away, a grandmother arrived from San Antonio and said she would not stop praying for her 10-year-old granddaughter as they waited for identification results of the DNA swabs.

"I'm furious that these shooting continue, these children are innocent, rifles should not be easily available to all. This is ... my hometown a small community of less than 20,000," she told CNN affiliate KSAT in a statement. "I never imagined this would happen to especially to loved ones. ... All we can do is pray hard for our country, state, schools and especially the families of all."

Mireles had been an educator for 17 years, according to her profile on the Uvalde Consolidated Independent School District website. In her off time, she enjoyed running, hiking, biking, and spending time with her family, according to the website.

The school district said it will cancel the remainder of the school year. Thursday was set to be the last day of school before the summer break.

What we know about the shooter

The shooter was a student at Uvalde High School, officials said.

Three days before shooting, a photo of two AR-15-style rifles appeared on an Instagram account tied to Ramos.

One of Ramos' former classmates, who didn't want to be identified, told CNN Ramos recently sent him a photo showing an AR-15, a backpack with rounds of ammunition and several gun magazines.

"He proceeded to text me, 'I look very different now. You wouldn't recognize me,'" the friend added.

Ramos worked at a local Wendy's, the restaurant's manager confirmed to CNN.

Evening manager Adrian Mendes said Ramos "kept to himself mostly" and "didn't really socialize with the other employees. ... He just worked, got paid, and came in to get his check."