What we know about the suspect in the California school shooting 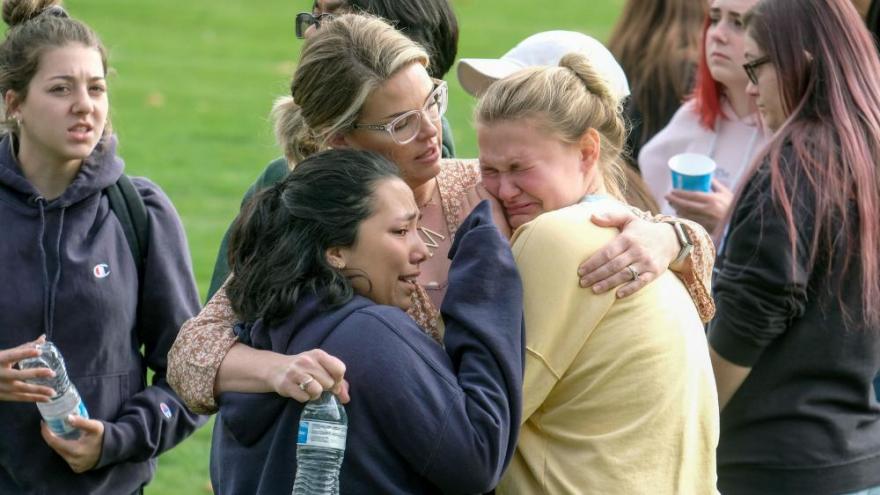 Students are comforted as they wait to be reunited with their parents following a shooting at Saugus High School that injured several people.

(CNN) -- After sheriff's deputies responded to a shooting at Saugus High School in Southern California on Thursday, six students were rushed to local hospitals with gunshot wounds.

"Among those that were transported turned out to be the suspect, who is currently in the hospital in grave condition," said Los Angeles County Sheriff Alex Villanueva.

In the hours after the student opened fire just after 7:30 a.m. at the Santa Clarita high school -- killing a 16-year-old girl and 14-year-old boy and wounding three other classmates -- details began to trickle out about the suspect.

"The suspect was later identified as one of the victims who was found in the quad," Wegener told reporters. The captain later told reporters the shooting took just 16 seconds.

The gunman used a .45-caliber pistol, which was recovered at the scene, authorities said. The weapon was out of bullets.

Detectives reviewed surveillance video from the scene that showed the suspect in the quad, Wegener said. He took out a handgun from backpack and shot five other students before shooting himself in the head, the captain said.

The suspect is a resident of the city of Santa Clarita -- about 30 miles northwest of Los Angeles, authorities said.

His mother and his girlfriend were talking with detectives, according to Wegener.

Investigators did a cursory check of the suspect's home and were obtaining a warrant to search the residence, Wegener said.

Paul Delacourt, FBI assistant director in charge in Los Angeles, said there are no known additional threats and the motive for the shooting not known.

After announcing the death of the second student, Villanueva said, "With a heavy heart, we're going to move on with the investigation and figure out what went wrong.

"I hate to have Saugus be added to the names of Columbine, Parkland, Sandy Hook, but it's a reality that affects us all throughout the nation -- something that we're going to have to figure out."