What we know about the mass shooting in York County, South Carolina 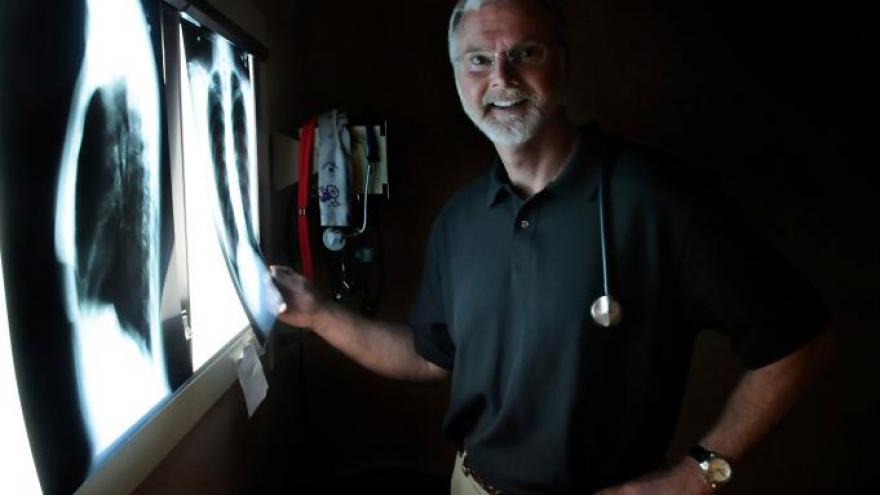 Dr. Robert Lesslie, a prominent doctor in Rock Hill, South Carolina was among those killed in a shooting by former NFL player Phillip Adams according to authorities. Lesslie is pictured here in 2009.

(CNN) -- A South Carolina community is reeling after a former NFL player killed five people -- including a prominent doctor, his wife and their two young grandchildren -- before killing himself, authorities said.

Officers responding to a 911 call found Dr. Robert Lesslie, his wife Barbara and two of their grandchildren, ages 5 and 9, dead in the back of the Lesslies' house outside the city of Rock Hill, York County Sheriff Kevin Tolson said at a news conference Thursday.

James Lewis, an air conditioner technician working outside the house, was also killed.

Robert Shook, also an air conditioner technician, was wounded and taken to a hospital. He was in critical condition as of Thursday morning, Tolson said.

The suspected shooter, former NFL player Phillip Adams, was found in a house nearby, dead from a self-inflicted gun wound after a standoff with police, the York County coroner's office said.

Here's everything we know so far about the tragedy.

Detectives are still searching for a motive. There's no evidence that Adams had been Lesslie's patient, Tolson said

"There's nothing about this right now that makes sense to any of us," he said.

What is known, however, is that something that Adams left at the home led investigators to believe he was the gunman.

Adams was staying with his parents about a quarter of a mile away from the Lesslie home, Tolson said.

Officers removed the parents from the home, and tried to contact Adams. Eventually, officers found him dead, Tolson said, though they did not hear gunshots.

Investigators believe Adams was the only assailant.

Adams used two types of weapons in the shooting, according to Tolson. Investigators don't yet know how he obtained them.

Dr. Robert Lesslie was a prominent physician in the area who had been practicing medicine there since 1981, according to a short biography on the website of Riverview Hospice and Palliative Care, which Lesslie founded and served as medical director of.

Lesslie also served as Winthrop University's supervising physician and medical director. He was a prolific writer who authored several books, including, "Angels in the ER: Inspiring True Stories from an Emergency Room Doctor."

Lesslie enjoyed "golfing, traveling and bagpiping. He is a regular columnist for YC magazine, an active member of his church, as well as an accomplished author," according to the Riverview Hospice and Palliative Care bio. "His series of books offer hope and wisdom for his readers' overall health and well being based on his years of experience in the field of medicine."

Rock Hill lost a "pillar in the community," Tolson said of Lesslie.

"His contributions to our community were wide ranging, and students, in particular, have long benefitted from referrals to his practice when additional care was needed beyond our scope," Winthrop University President George Hynd said in a statement.

Lesslie and his wife, Barbara, had been married for more than 40 years, according to his website's bio page. They had four grown children and nine grandchildren.

The couple lived in Rock Hill with "their golden retriever, Moses, several miniature horses, goats, donkeys, chickens and a lot of bees," the Riverview bio said.

"We are truly in the midst of the unimaginable," the Lesslies' children said in a statement. "The losses we are suffering cannot be uttered at this time."

The grandchildren's names were Adah and Noah, according to the statement.

"Adah, Noah, Barbara, Robert, and the rest of the family would ask any memorials or gifts to be sent to Camp Joy North Carolina (918 South Pleasantburg Dr., Greenville, SC 29607) in honor of hope and the promise of eternity."

Adah and Noah were students in a language immersion program at Cherry Park Elementary School, the Rock Hill School District said in a statement.

"The teachers, staff and classmates of Adah and Noah are hurting and confused, as are many in our community. We may never understand why this has taken place," the district said.

James Lewis, the slain air conditioning technician, was a single father of three children, according to CNN affiliate WSOC, which spoke to Lewis' parents, Tom Lewis and Linda Tucker.

Lewis, who was 38, was "killed doing the job he loved, making a living for the family he adored," WSOC reported.

"He helped anybody, he was a kind guy, a great dad. It's just so stupid," Tucker told WSOC.

"I keep on expecting to wake up, 'Oh, it was just a bad dream,' but it's not. It's real," Tom Lewis told WSOC. "I would like to find out why this guy did what he did."

"James was a hardworking, single father raising three wonderful children who now have to find their way in life without him," wrote the organizer of a GoFundMe account for the children.

Adams played in the NFL as a defensive back from 2010 to 2015 for teams including the San Francisco 49ers, Seattle Seahawks, Oakland Raiders and New York Jets.

Most recently, Adams played for the Atlanta Falcons in 2015, appearing in 13 games, according to NFL.com.

Adams' father, Alonzo Adams, told Charlotte TV station WCNC that his son was a good kid -- but he thought football had "messed him up."

Among his son's football injuries were a couple of concussions two weeks apart in December 2012, according to PBS reports from that time.