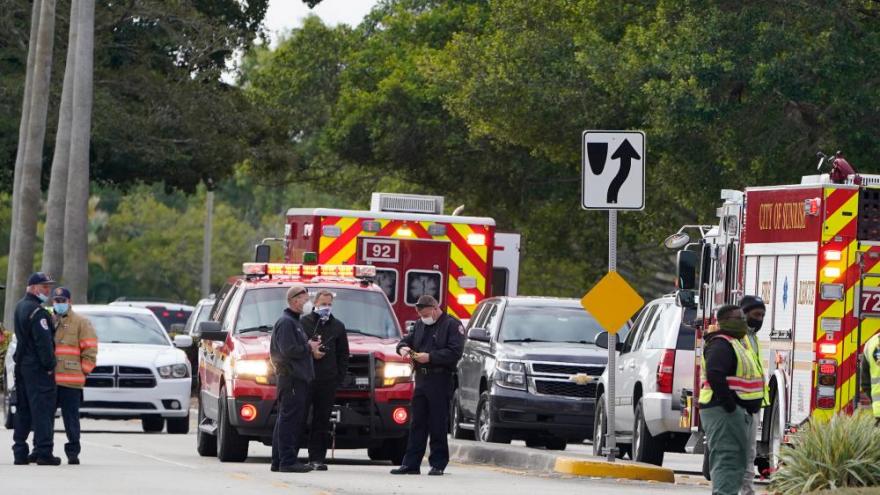 (CNN) -- The FBI on Wednesday named the man who shot five agents, killing two, as they tried to execute a search warrant in South Florida.

David Huber, 55, of Sunrise, died in Tuesday's incident, but authorities have not said what led to his death.

The FBI says it is reviewing what led to the shootout.

The agents were at work in Sunrise as part of a violent crimes against children case when the gunfight with the suspect happened, FBI officials said.

Here's what we know about the incident so far:

What happened during the shootout

The FBI hasn't said much about the warrant, other than it was ordered by a federal court relating to a case of violent crimes against children.

The FBI Agents Association said the search warrant was related to suspected possession of child pornography.

Sunrise police have said the shooting happened at the apartment complex at 6:04 a.m. Details about the exact sequence of events haven't been released, but here is a summary of key known developments:

• The person officers were looking for had barricaded himself, Sunrise police spokeswoman Otishia Browning-Smith said.

• The suspect opened fire, Special Agent in Charge George Piro said. Details about who fired first, or what led to the gunfire, weren't immediately available.

• Three other agents were wounded, the FBI said. Two were taken to a hospital with multiple gunshot wounds and have been released. The third agent was treated at the scene.

So that the wounded agents could be pulled away, a SWAT vehicle had to be crashed into the building to provide cover, a law enforcement source familiar with the shootout said on condition of anonymity.

The FBI said its Inspection Division is investigating the shooting. "The review process is thorough and objective and is conducted as expeditiously as possible under the circumstances," the FBI said.

Crime scene tape was still up Wednesday as FBI agents were still gathering evidence, and the entrance to the apartment complex where the shootout occurred was still being guarded by police.

Alfin and Schwartzenberger worked at the FBI's Miami office in a unit that investigates crimes against children. That involves crimes including online predators, sexual abuse, kidnappings and violent attacks.

Alfin, a New York native, had joined the FBI's Albany office in 2009 before coming to the Miami office in 2017.

And he once played a critical role in an investigation that led to hundreds of child pornography arrests, the FBI has said. In that case, Alfin investigated an online network called Playpen, through which users could "communicate anonymously through 'hidden service' websites," the FBI said in a May 2017 statement.

The investigation led to the arrest and conviction of the man who created the network in 2014 and a takedown of the site itself, the FBI said.

But it also launched "thousands of follow-up investigations," becoming a case "unprecedented in its scope and reach," the FBI said.

By May 2017, the investigation had resulted in the arrests of at least 350 people based in the US, the prosecutions of 25 producers of child pornography, the arrests of 51 "hands-on abusers" and the identification or rescue of 55 American children, the FBI said.

Abroad, the investigation led to 548 arrests and the identification or rescue of 296 sexually abused children, the FBI said.

In 2018, federal officials honored Alfin, two assistant US attorneys and a federal trial attorney for their work on the case. At a wider award ceremony held by the Executive Office for US Attorneys in Washington, DC, they received a director's award for superior performance by a litigative team.

Alfin is quoted in an 2017 FBI statement about the case.

"It's the same with any criminal violation: As they get smarter, we adapt, we find them," he said. "It's a cat-and-mouse game, except it's not a game. Kids are being abused, and it's our job to stop that."

According to federal court documents unrelated to the 2017 case, Alfin said he is "recognized as an expert in federal court in areas relating to computer forensics and the investigation of child exploitation crimes."

The documents added that he had testified on more than 20 occasions as a witness, across more than 10 federal jurisdictions.

He was married with one child, the FBI said.

Schwartzenberger, a Colorado native, had been an agent since 2005 and moved to the Miami bureau from the FBI's Albuquerque, New Mexico, office 11 years ago.

She worked on cases of crimes against children for more than seven years, the FBI said.

Schwartzenberger recently had a special connection with a Miami middle school, where she gave presentations to students in a law studies magnet program in the last five years.

The school offered its "deepest condolences to her family" and the FBI, and praised her impact on students in a statement posted on Twitter.

"As an FBI agent, Laura taught our students each year about the dangers of social media and much more. She would always say, 'I feel that coming here and talking about the hard stuff means that I won't see you guys on my end.'

"With her presentations, students would gain an awareness of online safety, cyberbullying, and experience the evidence response process of an FBI agent.

"She would always answer all the students' questions directly with care, but with firmness, to always remind them of the real world."

"From speaking to @rmsfalcons students about cyber safety, to fighting crimes against children, @FBI Special Agent Laura Schwartzenberger was deeply devoted to her work," Carvalho posted on Twitter. "Our hearts go out to her family, as well as that of SA Daniel Alfin."

She is survived by her husband and two children.

On-duty deaths of FBI agents in shootings are rare

Tuesday's shooting marks the first time since 2008 that an FBI agent was fatally shot on duty.

In that case, Special Agent Samuel S. Hicks was shot and killed while trying to serve an arrest warrant in a drug trafficking case at a home near Pittsburgh.

The Sunrise shooting is similar to another deadly firefight 35 years ago outside Miami that was a turning point in the FBI's history. On April 11, 1986, two violent bank robbers being pursued by FBI agents opened fire with high-powered firearms, killing two agents and wounding five others before the suspects were killed.

In the aftermath of the shootout, the FBI issued special agents with semi-automatic handguns rather than revolvers, changed its firearms training, and studied the psychological impacts of being shot at, former FBI deputy director John S. Pistole said in 2006.

In 2015, a new federal building in Miramar, Florida, housing the FBI Miami Field Office was dedicated the Benjamin P. Grogan and Jerry L. Dove Federal Building, named for the two agents who died that day.

How FBI and other officials have reacted

President Joe Biden expressed his condolences to the families of the victims Tuesday.

"My heart aches for the families," he said. "They put their lives on the line and it's a hell of a price to pay."

"The FBI will always honor their ultimate sacrifice and will be forever grateful for their bravery," Wray said.

South Florida US Attorney Ariana Fajardo Orshan said the "tragic events remind us of the bravery of federal agents, who risk their lives to protect our communities and our country."

"We must never forget that, just as we will never forget the ultimate sacrifice made by Special Agents Alfin and Schwartzenberger," the US attorney's statement reads.

"These agents were working to protect the most vulnerable in our society. FBIAA stands with the agents' families and pledges our support to them during this difficult time," President Brian O'Hare said.