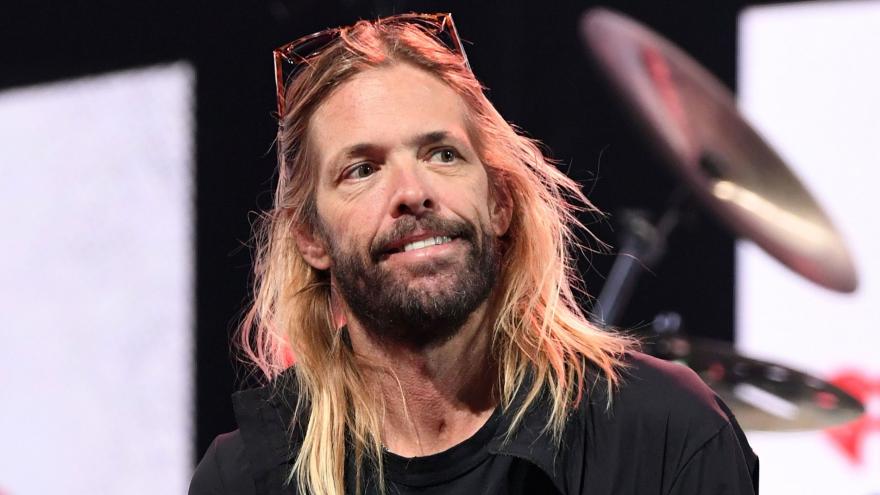 (CNN) -- The death of Foo Fighters drummer Taylor Hawkins shook the music world this weekend, with fans and musicians everywhere reeling from the news of his passing at age 50.

The circumstances of Hawkins' death remain largely unclear, but here's what we know so far.

He had a 25-year career with Foo Fighters

Hawkins was playing drums for Alanis Morissette before joining Foo Fighters in 1997 -- three years after the group's founding by frontman Dave Grohl -- in time to join the band's tour after the release of "The Colour and the Shape," per the Rock and Roll Hall of Fame.

"At first, it took me a while to find my place, it really did," Hawkins told CNN's Anderson Cooper in a 2014 interview for "60 Minutes," referencing Grohl's history as the drummer for the legendary grunge band Nirvana, which abruptly ceased with the death of Kurt Cobain in April 1994. "But (Grohl) never made it hard."

"When you have a drummer like Taylor Hawkins in your band, I don't necessarily miss being the drummer -- because I have the greatest drummer in the world," Grohl said, calling Hawkins "a much more technically minded drummer than I am."

Foo Fighters wasn't Hawkins' only project. He had released solo material under his own name and with Taylor Hawkins & the Coattail Riders, in which Hawkins sang lead and played drums. The band released three albums, most recently 2019's "Get the Money."

He died while on tour in South America

There's still a lot we don't know about how Hawkins died, but news of his passing broke Friday just as Foo Fighters was set to perform in Bogotá, Colombia, at the Festival Estéreo Picnic.

"The Foo Fighters family is devastated by the tragic and untimely loss of our beloved Taylor Hawkins. His musical spirit and infectious laughter will live on with all of us forever," the band said on Twitter. "Our hearts go out to his wife, children and family, and we ask that their privacy be treated with the utmost respect in this unimaginably difficult time."

Emergency responders received a report Friday evening about a patient with chest pain at a hotel north of the city, according to a statement from Bogotá's secretary of health. An ambulance was sent to the scene. A private health provider had already been providing treatment, but efforts to resuscitate to Hawkins were unsuccessful, the statement said.

Romeo Reyes, a concertgoer who traveled to Bogotá from El Salvador, told CNN the performance was canceled as fans gathered around 11 p.m. "About 10 minutes later, the news broke that Taylor had died," Reyes said.

"We were all sad," Reyes said.

The band's performance in Colombia was supposed to be followed by another on Sunday in São Paulo, Brazil.

What a preliminary report by Colombia's AG says

The cause of death was not disclosed in a preliminary "forensic medical study" released Saturday by Colombia's Attorney General's Office, which said a urine toxicology test found 10 substances, including THC, tricyclic antidepressants, benzodiazepines and opioids.

"The National Institute of Forensic Medicine continues the medical studies to achieve total clarification of the events that led to the death of Taylor Hawkins," the report said, and the attorney general's office will continue to investigate his cause of death in a "timely manner."

How he's being remembered by legendary colleagues

Funeral plans for Hawkins have not been released, but fans and colleagues the world over have been paying tribute to Hawkins in the days since his death -- including rock and roll legends like Roger Taylor, the drummer of Queen who Hawkins said had inspired him to get behind the drum set.

"He was a kind brilliant man and an inspirational mentor to my son Rufus and the best friend one could ever have," the Queen drummer wrote Saturday on Instagram, saying Hawkins' death was like "losing a younger favourite brother."

In his own tribute, Led Zeppelin's Jimmy Page recalled playing with Foo Fighters in 2008 at Wembley Stadium, saying, "It was so good to play with him. I really admired him and he was a brilliant musician: his technique, his energy and spirited enthusiasm."

There are also tributes from everyday folks, fans who were touched by Hawkins and his music, like Franco Tolone, who tweeted footage of Hawkins singing Queen's "Somebody to Love" at his last performance on March 20 at Lollapalooza Argentina.

"Who would have thought that we were witnessing the last performance of Taylor Hawkins in his life ... A shock," Tolone wrote. "Goodbye, beast of music."

Another fan is 9-year-old Emma Sofia, who met Hawkins just days before his death after she set up her drums outside the band's hotel in Paraguay.

"We will remember him for his charisma and the beautiful gesture he had with Emma," the family wrote on her Instagram. "Taylor gave us something to believe in. He was, is and always will be an inspiration."