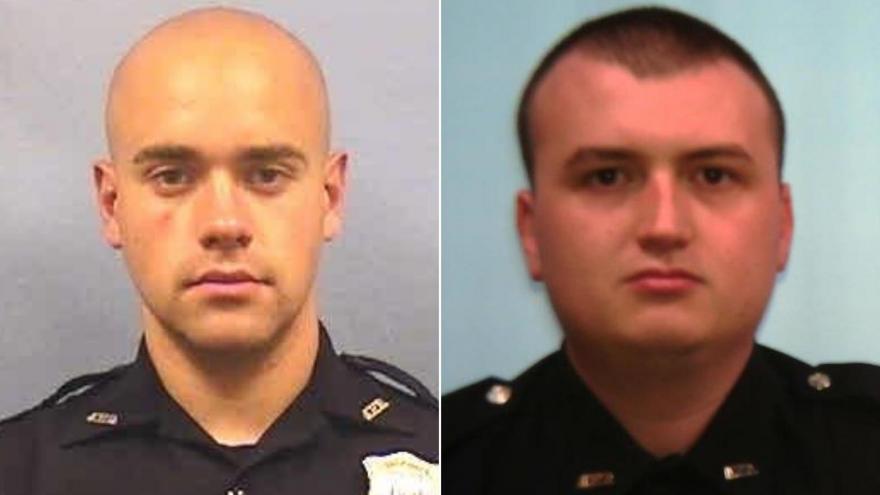 Former officers Garrett Rolfe (left) and Devin Bronsan (right) are facing more than a dozen charges combined for their actions leading up to Rayshard Brooks' death.

(CNN) -- More than two minutes passed before two Atlanta police officers rendered first aid to Rayshard Brooks after he was shot. Now, they are facing more than a dozen charges combined for their actions.

Brooks had fallen asleep in his car in a Wendy's drive-thru lane in Atlanta last week when police were called. After he failed a Breathalyzer test and officers tried to handcuff him, the 27-year-old Brooks struggled with officers and ran before being shot twice in the back.

Here's how prosecutors outlined the charges against the pair in their arrest warrants:

Rolfe, 27, the former officer who shot Brooks, is facing a total of 11 counts.

He is charged with murder in Brooks' death and if convicted of that charge, he could face life in prison or the death penalty.

"The demeanor of the officers immediately after the shooting did not reflect any fear or danger of Mr. Brooks," District Attorney Paul Howard said Wednesday.

The law firm representing Rolfe issued a statement disputing the charges and saying the former officer's actions, including the use of force, were justified under state law.

The statement said Brooks had stolen the other officer's Taser and pointed it at Rolfe as he ran. Rolfe "heard a sound like a gunshot and saw a flash in front of him," and then fired, the attorneys said.

"When Mr. Brooks turned and pointed an object at Officer Rolfe, any officer would have reasonably believed that he intended to disarm, disable, or seriously injure him," the statement released by LoRusso Law Firm said.

Rolfe is facing six other charges related specifically to his interactions with Brooks:

- Aggravated assault with a deadly weapon linked to Brooks' death. The offense carries a possible sentence of 1 to 20 years.

- Aggravated assault for kicking Brooks. Rolfe was wearing a shoe "which, when used offensively against a person, is likely to or actually does result in serious bodily injury," an arrest warrant said. The offense carries a sentence of 1 to 20 years.

- Four counts of violation of oath by a public officer -- a felony offense under Georgia law. Each offense carries a sentence of 1 to 5 years.

Prosecutors say Rolfe broke his oath and didn't follow the police department policies when he used a Taser as Brooks ran away, failed to render timely medical aid to Brooks, shot Brooks twice in the back and failed to tell him that he was under arrest for driving under the influence.

Rolfe faces four additional charges linked to the third shot he fired, a bullet that hit an occupied vehicle in the Wendy's lot.

- Three aggravated assault charges related to the three people who were inside the vehicle.

- One count of criminal damage of property in the first degree for damaging the vehicle "in a manner so as to endanger human life by shooting it with a handgun."

Rolfe was fired from the police department following the shooting.

The other officer, Devin Brosnan, did not shoot Brooks but has been charged for his actions in the incident.

Brosnan, 26, is facing an aggravated assault charge for standing or stepping on Brooks' shoulder while he was lying on the ground, prosecutors said. The offense carries a sentence of 1 to 20 years.

Howard told reporters on Wednesday that Brosnan has "admitted that he stood on the body of Mr. Brooks."

Brosnan was also charged with two violations of oath of office, prosecutors said.

He violated the police department policy when he stood on Brooks after he was shot, his warrant said. Howard said it was an "unauthorized weaponless control technique which the city of Atlanta prohibits."

The other violation stems from failing to render timely medical aid to Brooks.

Brosnan is still on the force but was placed on administrative duty following Brooks' death.

His attorneys, Amanda Clark Palmer and Don Samuel, said Brosnan's behavior on the night of the shooting was "exemplary."

"Devin Brosnan's conduct Friday night was exemplary. He treated Mr. Brooks throughout his encounter with him with respect and with dignity and with a concern for his -- Mr. Brooks' -- safety as well as the safety of the community," the attorneys said.

"There is not a shred of evidence, not even a hint, that his encounter with Mr. Brooks was other than a textbook example of how a police officer should treat somebody who appears to be inebriated and is driving a vehicle," they added.