What we know about the Brooklyn subway shooting 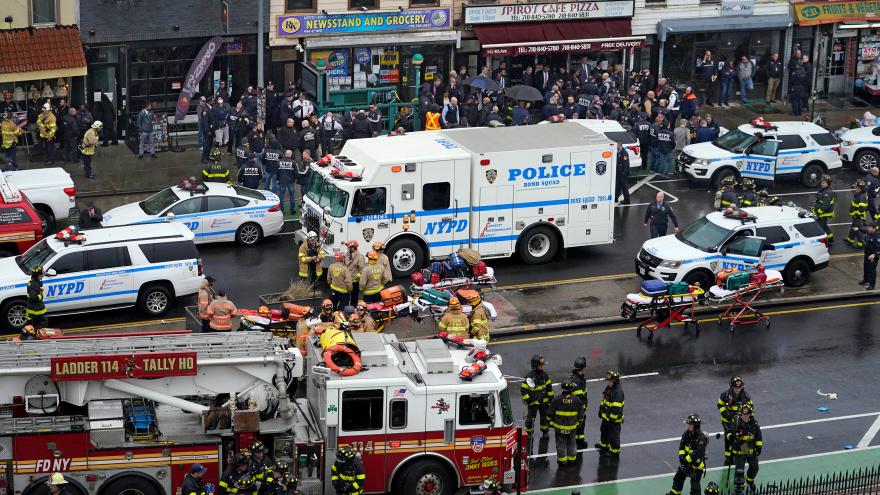 (CNN) -- Riders of a Brooklyn subway train were victims of a mass shooting Tuesday morning when an unidentified man donned a gas mask, opened a gas canister and began firing into the smoky train car, hitting multiple people on the train and the subway platform, police said.

Authorities are still searching for the gunman whose motive is unknown. Ten people were shot and an additional 13 were injured via smoke inhalation, falling down or panic attacks, officials said.

Here's what we know and don't know about the violent attack and the ongoing search for the suspect.

Just before 8:30 a.m. Tuesday, the Fire Department of New York (FDNY) received a report of smoke at the 36th Street subway station in Brooklyn's Sunset Park neighborhood, according to FDNY. When first responders arrived, they found multiple gunshot victims throughout the subway station and others who were injured in the chaos.

Five of the victims were students commuting to school, New York Gov. Kathy Hochul told reporters outside Maimonides Medical Center. She said she met with a 12-year-old, a 13-year-old, a 16-year-old and two 18-year-olds at the hospital, which is the only pediatric trauma hospital in the area.

Investigators descended on the Brooklyn neighborhood and quickly zeroed in on a credit card and keys to a U-Haul van that had been rented in Philadelphia and that were found at the scene.

Two officials said they believe the gun jammed during the shooting.

Police Commissioner Keechant Sewell said there were no known active explosive devices on the train. The attack is not being investigated as an act of terrorism, but authorities have not ruled anything out, she said.

Authorities have not identified a gunman or motive as of Tuesday night.

New York City agencies are offering a $50,000 reward for any information leading to the arrest of the suspect, according to a statement from the Metropolitan Transportation Authority (MTA).

However, the NYPD identified a man named Frank James, 62, as a "person of interest." He is believed to be the renter of the U-Haul and has addresses in both Wisconsin and Philadelphia, Essig said.

The records show James rented the van using a Wisconsin license with a Milwaukee address.

YouTube videos have been linked to James because a screenshot from one of them is being used on a NYPD Crimestoppers flyer. James talked about violence and mass shootings in the videos, including one uploaded Monday in which he said he's thought about killing people who have presumably hurt him.

CNN has reached out to James and his family for comment, but has not received a response.

Images captured by people at the scene and witness accounts piece together a picture of the panic and chaos that ensued when shots began to ring out in the smoke-filled train car.

Video taken by the passenger showed people backing away from the door and a man banging on the door trying to move into the subway car. In another video, people can be seen rushing off the subway train after it pulled into the 36th Street subway station. Smoke pours out of the car where the shooting took place, and people can be heard screaming. An individual is seen helping an injured and bleeding person off the train and another man is seen hobbling off the train shortly afterward.

Images taken by others at the scene show the subway platform streaked with blood and people sitting and lying on the train platform following the incident.

Hourari Benkada, 27, told CNN he was sitting next to the subway shooting suspect on the "N" train and was shot in the back of his knee while trying to flee.

"I feel shocked, I feel shaky, I don't know if I can ever ride a train," Benkada, a lifelong New Yorker, said after coming out of surgery.

Benkada, a Housekeeping Manager at the New Yorker Hotel, said he got on the last car of the N train and sat next to a man with a duffel bag who was wearing an MTA vest. The man then let off a "smoke bomb" and started shooting about 20 seconds after the train took off, Benkada said.

Benkada said he was focused on helping a pregnant woman, who he feared would get hurt as people rushed to the front of the car, when he got shot, describing it as "the worst pain of my entire life."

He explained the bullet hit him in the back of his knee and came out the other side. Doctors told him the bullet grazed his kneecap. He is expected to walk on his own after several weeks on crutches.

Benkada said he heard other people in pain but was unable to see them or the suspect because of the smoke.

Claire Tunkel, 46, told CNN she took off her jacket and tied it around the leg of a man who suffered a gunshot wound. Tunkel, who went to the hospital for smoke inhalation, said several victims were laying on the floor of the subway platform after the train arrived at the station.

"One of the guys who was shot, his leg was bleeding pretty bad, so I took off my jacket and tied it around his leg," she said.

Tunkel was in the subway car where the shooting took place and described the scene as chaotic. While she couldn't see anything because of the smoke, she said she heard people crying out for help and others who said they were bleeding.

"You couldn't see anything, but you could feel it," she said. People were rushing to the front of the car, and some fell to the ground, she noted. "You could feel the bodies."