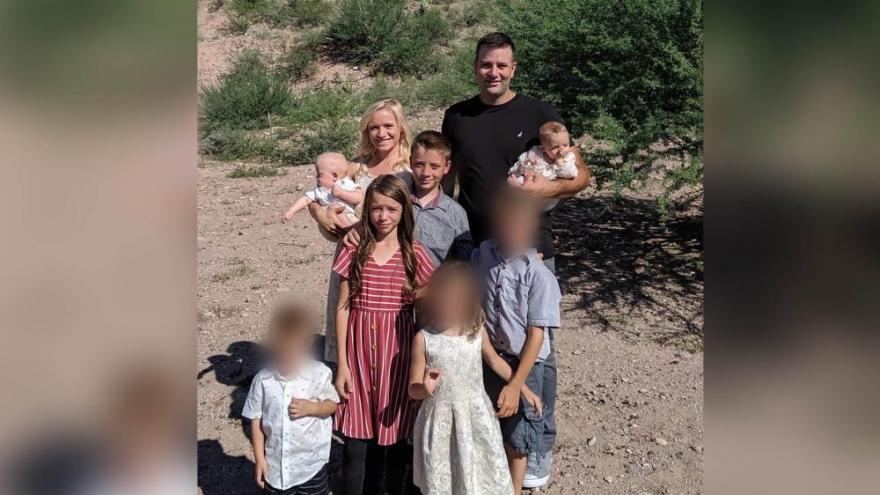 Howard Miller, the man in the black shirt, and the three children with blurred faces survived the attack. The five others were killed.

(CNN) -- Nine women and children from a Mormon community in Mexico were killed while traveling in a three-car caravan south of the US-Mexico border on Monday, according to Mexico's security minister.

Three women and six children, all with dual US-Mexican citizenship, were killed in the attack, Security Minister Alfonso Durazo said in a news conference Tuesday.

Here's what we know so far about the attack.

The victims were "all shot while in vehicles while driving," family member Alex LeBaron told CNN on Tuesday. Several children survived.

Investigators believe the three vehicles, traveling between the Mexican states of Sonora and Chihuahua, were ambushed by criminal groups Monday, Mexican authorities said.

"Women and children (between 14 years old and 10 months) were massacred, burned alive," LeBaron said. "Mothers were screaming for the fire to stop."

They were driving together for safety reasons, said Kendra Lee Miller, whose sister-in-law was killed in the attack. The family was supposed to go to Miller's wedding next week in La Mora, she said.

Five children who were hospitalized in Tucson will survive, Willie Jessop, whose son married Dawna Langford's daughter, told CNN. Three of the children have very serious injuries but the two others could be discharged soon, Jessop said. Dawna was one of the three mothers killed in the ambush.

Who carried out the attack, and why?

Officials and family members believe that Mexican drug cartels carried out the attack, though there's a question of which cartel did so. It is also not yet clear if the attacks specifically targeted the family or if it was a case of mistaken identity.

Mexican Security Minister Alfonso Durazo said the attack could have been a case of mistaken identity of "conflicting groups in the area."

Alex LeBaron said the families were allegedly attacked "separately but simultaneously by two different groups of the same cartel," he said. "Most likely by accident, mistaken for their rivals."

But former Mexican Foreign Minister Jorge Castañeda told CNN on Tuesday evening two attacks in two places by the same group makes it more likely that they were targeted.

Castañeda said there were long-standing tensions between the families and cartels. He said one of the women killed was an activist and there were frictions over water rights.

However, Lafe Langford, another relative of the victims, rejected Castañeda's argument.

"The only thing they were activists for was their children, the education of their children and their homesteads," Langford said.

"(Castañeda) said something about a conflict over water rights, (but) we live on a river. We have all the water we could ever need."

Kendra Lee Miller, whose sister-in-law Rhonita Maria Miller was killed in the attack, said, "cartels have taken too many of our family members" and those killed yesterday were not the first. Kendra Lee Miller told CNN her family has recently been threatened by cartels over where her family can travel.

Meanwhile, other officials have debated which specific cartels are involved.

The Attorney-General for the neighboring state of Chihuahua, Cesar Peniche Espejel, said he believes the newly-formed "Los Jaguares" cartel, an off-shoot of the Sinaloa cartel, may be behind the massacre.

But earlier Tuesday, a US official said a rival cartel called La Línea is being looked at in connection with the attack.

One person was arrested Tuesday that officials initially believed was connected to the attacks. But a preliminary investigation showed that the suspect is not involved in the case, Mexico's Secretary of Security Alfonso Durazo said Wednesday.

Who are the victims?

The victims are part of a Mormon community of about 3,000 members living in Mexico.

Generally, the community practices a fundamentalist version of Mormonism, and one of the victim's family members told CNN that some practice polygamy. Polygamy is illegal in both the United States and in Mexico.

A spokesman from the Church of Jesus Christ of Latter-day Saints, commonly known as the Mormon Church, said the victims were not members.

"We are heartbroken to hear of the tragedy that has touched these families in Mexico. Though it is our understanding that they are not members of The Church of Jesus Christ of Latter-day Saints, our love, prayers and sympathies are with them as they mourn and remember their loved ones."

The LeBaron family has previously been the victim of drug cartel violence in Mexico.

In 2009, Eric LeBaron was kidnapped and returned unharmed a week later, as CNN reported at the time. Afterward, his older brother Benjamin became a nationally known anti-crime activist who pushed the local community to take a stand against violence.

Two months later, Benjamin LeBaron, 32, and his brother-in-law Luis Widmar were beaten and shot to death after armed men stormed their home in Chihuahua. Authorities later arrested the alleged ringleader of a drug trafficking family that ran a smuggling operation on Mexico's border with Texas.

How are officials responding?

In the wake of the attack, US President Donald Trump called for war against the drug cartels in a series of tweets.

"If Mexico needs or requests help in cleaning out these... monsters, the United Stands stands ready, willing & able to get involved and do the job quickly and effectively," he wrote.

"This is the time for Mexico, with the help of the United States, to wage WAR on the drug cartels and wipe them off the face of the earth. We merely await a call from your great new president!" he added.

Mexican President Andrés Manuel López Obrador said he planned to reach out to Trump about the incident.

"I will thank him for his support and we will discuss if we need assistance," he said. "I do not believe that we will. It's Mexico's responsibility."

The FBI also has offered to assist Mexican authorities in the investigation, an FBI official said.