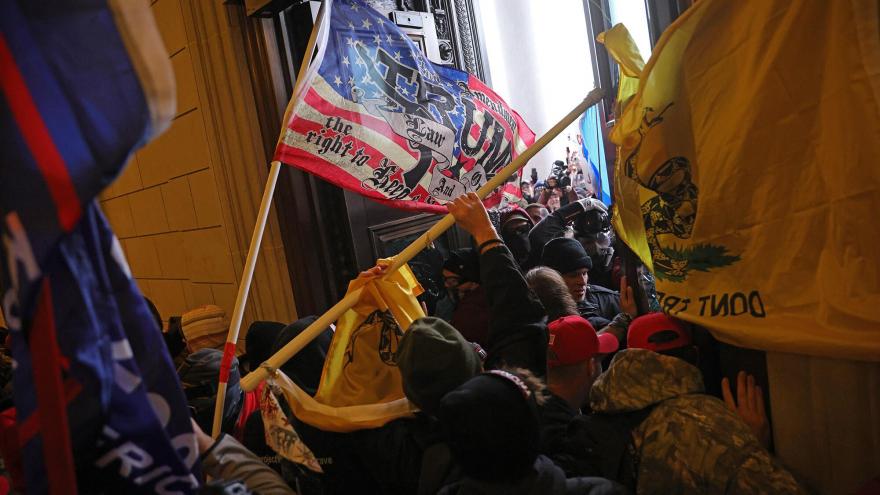 (CNN) -- A US Capitol police officer is the latest to be confirmed dead after a mob of President Trump's supporters stormed the US Capitol on Wednesday.

Four other people died during the stunning attack at the heart of American democracy as mob members vandalized the building and assaulted police officers. One woman was fatally shot by police and three people died of apparent medical emergencies.

Several DC Metropolitan Police officers were also injured during the insurrection, police Chief Robert Contee said. One officer had significant facial injuries from being struck by a projectile, and another officer was hospitalized after being pepper-sprayed.

Here's what we know about the people who died:

Officer dies after being injured

Officer Sicknick was injured while physically engaging with the rioters and collapsed after returning to his division office. "He was taken to a local hospital where he succumbed to his injuries," the Capitol Police statement said.

Officer Sicknick joined the USCP in July 2008, and most recently served in the Department's First Responder's Unit.

"The entire USCP Department expresses its deepest sympathies to Officer Sicknick's family and friends on their loss, and mourns the loss of a friend and colleague," Capitol Police added.

His death is now being investigated.

Sicknick was originally from South River, New Jersey, and the youngest of three sons, according to a statement issued by his brother on behalf of his family.

Sicknick "wanted to be a police officer his entire life," his brother Ken said, and joined the New Jersey National Guard in his pursuit of that goal.

According to a statement from New Jersey Gov. Phil Murphy's office, Sicknick was a staff sergeant for the New Jersey National Guard. He served as a fire team member and a leader of the 108th Security Force Squadron, 108th Wing, at Joint Base McGuire-Dix-Lakehurst, Murphy's statement said.

Sicknick's family was "very proud" of his service to his country, Ken Sicknick said.

"Brian is a hero, and that is what we would like people to remember," he said.

The woman was given medical assistance immediately and taken to a hospital, where she was pronounced dead.

Authorities identified her as Ashli Babbitt, a 35-year-old from Huntington, Maryland.

Babbit's mother, Michelle Witthoeft told CNN on Thursday she was devastated to learn of her daughter's death.

"I loved and admired her greatly," Witthoeft said of Babbitt. "She served this country boldly and proudly."

Babbitt was an ardent Trump supporter who held strong political views, her mother said, and was "passionate enough to die for what she believed in."

Babbitt, who was previously married but separated from her husband in 2019, frequently attended pro-Trump rallies. She flew to Washington, DC, from San Diego, California, with the intent to participate in the protest this week, her mother said.

"Her political views were strong and adamant, and she voiced them whenever she could," Witthoeft said.

Babbitt served as a senior airman in the US Air Force from 2004 to 2008 under the name Ashli Elizabeth McEntee, according to military records. She was a member of the Air Force Reserve from 2008 to 2010 and was in the Air National Guard from 2010 until November 2016, records show.

"She served in the United States Air Force and was deployed four times and came back safely, only to have her own country shoot her down," Witthoeft said tearfully by phone.

The US Capitol Police employee who shot Babbitt has been placed on administrative leave and their police powers have been suspended pending a joint Metro Police and USCP investigation, USCP said.

"This is a tragic incident, and I send my condolences to the victim's family and friends," Metro Police Chief Contee said.

Sullivan said rioters were using flag poles and other items to smash glass windows inside the Capitol. The woman then tried to make her way through the window when several people with guns came out through the doorways.

"The second that she climbed through the window she got shot right in the neck area, fell backwards," Sullivan said in an interview that broadcast on CNN's "Anderson Cooper 360."

"I just remember the sense of shock and sorrow that somebody just died and did not need to die."

The woman was trying to enter an area that did not yet appear to have been breached by rioters, Sullivan said.

"It was an area that was completely blocked off," he said. "They had chairs up against the doorway, tables, so people couldn't get in."

Three other people who had come from out of state died of "medical emergencies" during the riot, police said.

"One adult female and two adult males appear to have suffered from separate medical emergencies, which resulted in their deaths," Contee said. "Any loss of life in the District is tragic and our thoughts are with anyone impacted by their loss."

They were identified as Benjamin Philips, 50, of Ringtown, Pennsylvania; Kevin Greeson, 55, of Athens, Alabama; and Rosanne Boyland, 34, of Kennesaw, Georgia. The three were on the grounds of the Capitol when they experienced their medical emergencies, Contee said.

Greeson had a history of high blood pressure and suffered a heart attack amid the excitement, his family said in a statement to CNN. He was an advocate of Trump and attended the event to show his support.

"He was excited to be there to experience this event," the statement said. "He was not there to participate in violence or rioting, nor did he condone such actions."

The family says they are devastated by the loss.

"Kevin was a wonderful father and husband who loved life," the family statement said. "He loved to ride motorcycles, he loved his job and his coworkers, and he loved his dogs."

Boyland's family is also mourning her death, her brother-in-law, Justin Cave, told CNN affiliate WGCL. The family is still working to learn more details about the specifics of her death, he said.

As the family watched Wednesday's events, they hoped that Boyland wasn't among the crowd, Cave said. "Tragically she was there and it cost her life," he said.

"She was a wonderful sister, daughter, and aunt. Anyone who knew her knows how compassionate she was, she always put others before herself," Cave said.

DC Fire and Emergency Medical Services transported people to area hospitals with injuries ranging from cardiac arrest to multiple fractures after falling from scaffolding on the West front of the Capitol building.

However, city officials did not say whether any of these people are the ones who died.

Correction: Earlier versions of this article misspelled the last name of Benjamin Philips.