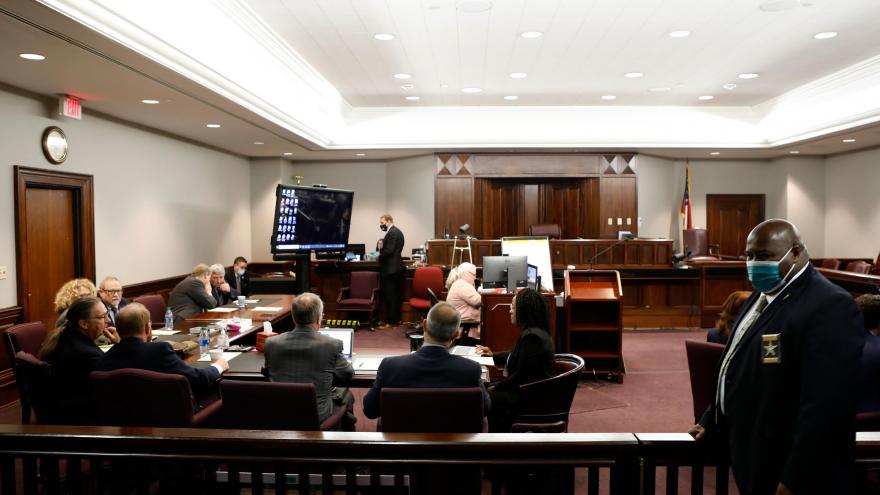 (CNN) -- After more than two weeks of court proceedings and testimony from more than 20 witnesses, jurors in the Ahmaud Arbery killing trial are set to begin their second day of deliberations Wednesday morning.

Three men -- Travis McMichael, his father Gregory McMichael, and neighbor William "Roddie" Bryan Jr. -- are standing trial on charges related to the shooting of Arbery in the Satilla Shores neighborhood outside Brunswick, in Glynn County, Georgia, on February 23, 2020. The defendants have pleaded not guilty to all charges

When did they start?

The jury reviewed the case for more than six hours Tuesday after the prosecution presented a rebuttal to the defense's closing arguments. Court resumes at 8:30 a.m. ET Wednesday.

Who's on the jury?

Nine White women, two White men and one Black man are serving on the trial jury, with two White women and one White man serving as jury alternates, according to a CNN analysis of juror data. Having only one Black juror has been a key complaint from prosecutors and Arbery's family, as Glynn County's population is about 69% White and 26% Black, according to 2019 data from the US Census Bureau. Arbery was Black and the defendants are White.

Judge Timothy Walmsley said of the jury's makeup, "This court has found that there appears to be intentional discrimination," but ruled that the case could go forward with the selected jurors because the defense was able to provide valid reasons, beyond race, for why the other Black jurors were dismissed.

Defense attorneys also took issue with there being fewer older White men without college degrees in the juror pool, saying the demographic was underrepresented.

What charges are they weighing?

Each of the defendants face nine separate charges, including malice and felony murder, aggravated assault, false imprisonment and criminal attempt to commit a felony. If the jury finds Bryan not guilty of a second aggravated assault charge, they can consider three lesser misdemeanor charges for simple assault, reckless conduct, or reckless driving.

The McMichaels claim they were conducting a citizen's arrest after suspecting Arbery of burglary of a nearby home that was under construction, and that Travis McMichael acted in self-defense by shooting Arbery. Bryan maintains he is innocent of any wrongdoing.

Have they asked any questions?

The jury did not ask any questions of the court during Tuesday's deliberations.