What to watch on the second night of the Republican convention 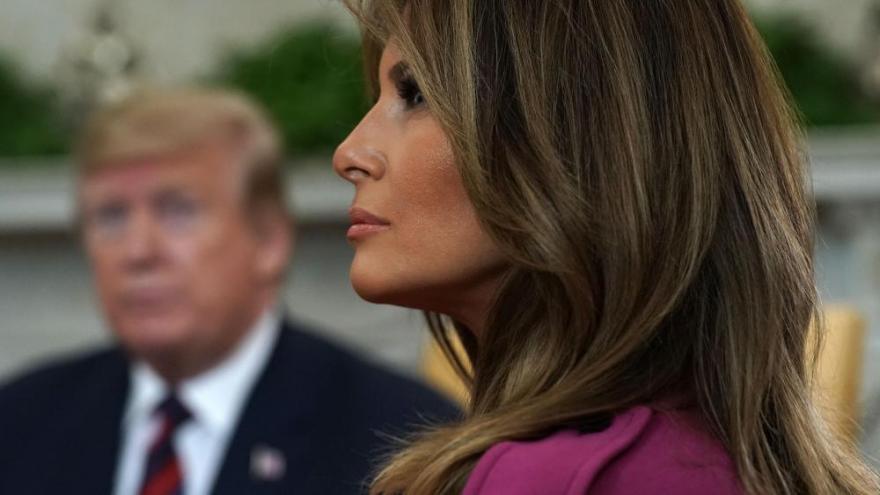 President Donald Trump and first lady Melania Trump during a meeting with South Korean President Moon Jae-in in the Oval Office of the White House April 11, 2019 in Washington, DC.

(CNN) -- Republicans will gather for the second night of the Republican National Convention on Tuesday to continue to make the case for Donald Trump to serve as president for four more years.

After adopting a "Land of Promise" theme on Monday, the convention will move on to the theme "Land of Opportunity" on Tuesday. Republicans are doubling down on their official message to voters: Joe Biden painted a grim portrait of America during last week's Democratic convention, but the Trump presidency has brought in and will continue to usher in prosperity and opportunity for all Americans.

But the unofficial message of convention speakers, so far, has been darker. On Monday night, speakers frequently warned of the threat of looming socialist rule by Joe Biden and Democrats. One speaker claimed that Trump will protect Americans from "crime, violence, mob rule."

While the RNC held their in-person roll call in Charlotte, North Carolina, on Monday before moving on to speeches at an audience-less auditorium in Washington, DC, Tuesday's remarks are not expected to include another large, in-person convention event.

Like Monday night's speeches in Washington, most of Tuesday's speeches are scheduled to be taped from an empty auditorium in downtown DC.

Trump is not scheduled to speak during Tuesday's events, but the campaign has promised surprise appearances by the President throughout the week.

The first lady is Tuesday's closer, delivering the night's final remarks from the newly renovated White House Rose Garden, which she unveiled this past weekend.

While this would typically be a time when presidential spouses would be seen headlining campaign stops, Melania Trump has opted to stay away from the 2020 trail so far. So the convention speech will mark the first time in a long time that she's back in campaign mode.

The speech was not vetted by anyone in the West Wing, nor did anyone on the President's staff approve the content, the first lady's chief of staff Stephanie Grisham confirmed to CNN.

Grisham also said the content of the speech is "positive and uplifting," adding it is "very forward-looking."

It's unusual for a first lady to deliver a speech of this magnitude to this large an audience without it being vetted by anyone in the West Wing, specifically to monitor for messaging alignment.

Tuesday's speech will also be an opportunity for redemption for her 2016 Republican National Convention remarks, when her speech included cribbed lines.

According to campaign sources at the time of her 2016 speech, Melania Trump shunned the assistance of more seasoned speechwriters and worked with a staffer at the Trump Organization who had some experience helping ghostwrite her husband's books.

She effectively botched her introduction to America, delivering an RNC speech that included lines plagiarized from Michelle Obama's 2008 convention speech.

This year, the first lady is again opting not to use a professional speechwriting team for her convention address, relying instead on her small circle of staff, according to a Republican strategist.

Attending the first lady's speech is the only event on the President's public schedule, though Trump made several unscheduled appearances during Monday's convention. Vice President Mike Pence and second lady Karen Pence are also scheduled to attend the first lady's remarks.

Secretary of State Mike Pompeo will address the Republican convention from Jerusalem, delivering a pre-taped address that will break with the past precedent of US secretaries of state not addressing political conventions and a long-standing protocol of not discussing domestic politics while abroad.

The remarks from Israel come a month after Pompeo reminded employees to "not improperly engage the Department of State in the political process" in a cable obtained by CNN.

A State Department spokesperson and another source familiar with the situation told CNN Pompeo would deliver the remarks in his personal capacity and that no taxpayer funds would be used.

The speech serves as an opportunity for Republicans to highlight the Trump administration's foreign policy agenda.

A source told CNN that the speech is expected to run about four minutes and will highlight what the administration sees as Trump's foreign policy accomplishments, including being tough on China, delivering robust Middle East policy, strengthening NATO and seeking out diplomacy with North Korea. Pompeo will also highlight the relocation of the US embassy in Israel from Tel Aviv to Jerusalem, and mention the recent Israel-United Arab Emirates agreement.

Pompeo's speech follows former US Ambassador to the United Nations Nikki Haley's convention speech on Monday, when she made the case that Biden would degrade America's standing in the world.

Two of the President's children, Eric Trump and Tiffany Trump, are also scheduled to speak on Tuesday night.

Tiffany Trump, the President's only daughter with ex-wife Marla Maples, is less frequently seen campaigning for her father than her older siblings. But while she doesn't often speak at political engagements, she did speak at the Republican convention in 2016.

Eric Trump, the executive vice president of the Trump Organization, will also speak -- a day after New York Attorney General Letitia James sought for him to be deposed in an investigation of the company.

Tiffany and Eric follow Donald Trump Jr., who spoke at the convention on Monday.

On night two of the Republican convention, the GOP is highlighting another conservative at the center of an incident that went viral.

The RNC on Monday featured the St. Louis couple -- the McCloskeys -- who went viral in late June after they were seen with brandishing guns outside their mansion at protesters walking on a private street en route to demonstrate outside the St. Louis mayor's residence. The mayor lives on a nearby public street and the protesters were going down a street that doesn't reach the mayor's house, a St. Louis city official said. The Missouri couple was charged in July with unlawful use of a weapon, a class E felony.

Monday's remarks also featured Kim Klacik, a GOP congressional candidate who starred in a viral video about "the reality for Black people" in Baltimore.

On Tuesday, the convention will feature Nick Sandmann, a Kentucky teenager who was at the center of a viral video controversy in which he was filmed while wearing a "Make America Great Again" hat with his student group at the Lincoln Memorial after his group encountered groups of protesters.

Sandmann sued numerous news organizations and so far reached settlements with The Washington Post and CNN.