What to watch on the Republican convention's third night 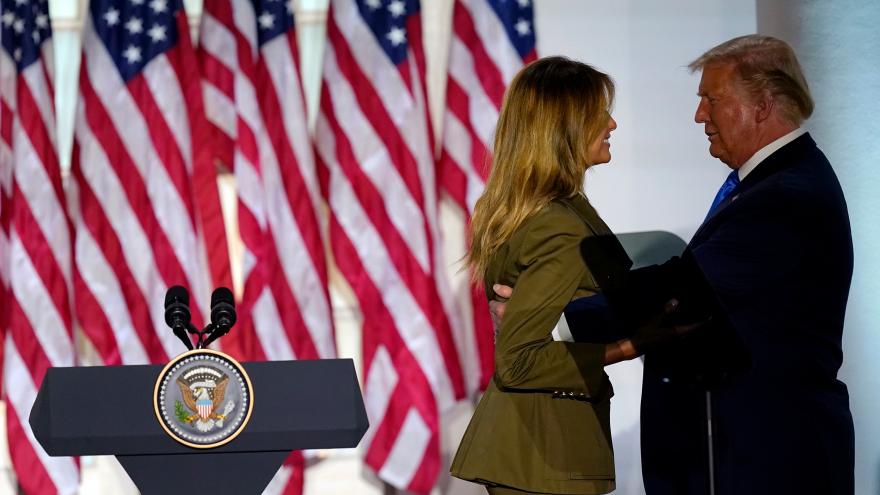 (CNN) -- After a second convention day full of unconventional moments -- including a presidential pardon, a naturalization ceremony and a sitting secretary of state mixing diplomacy and politics in a speech from Jerusalem -- day three of the Republican convention is set to focus the theme: "Land of Heroes."

The night is expected to feature a military veteran, a civil rights activist and the president of the National Association of Police Organizations. But if the last two nights were any indication, also expect appeals to the culture wars, rebukes of liberal ideology and stories of everyday Americans who say they have benefited from the Trump administration's policies.

Like Tuesday's speeches, Wednesday's appearances are expected to be a mix of pre-taped remarks, pre-cut videos and live broadcasts. The Trump campaign has said to prepare for surprises and expect President Donald Trump to make an appearance each night of the convention.

The night is slated to feature Vice President Mike Pence, second lady Karen Pence, several women in high-ranking political positions within the Republican Party across the country and Madison Cawthorn, the 25-year-old who won a North Carolina Republican congressional primary over a candidate backed by Trump.

Here's what to watch on Wednesday beginning at 8:30 p.m. ET:

Over the last two nights, the convention's concluding speeches have sought to deliver more unifying messages than the preceding speakers.

But even though Pence doesn't typically see himself as Trump's attack dog, a Trump campaign official told CNN's Jim Acosta the vice president knows he has a job to do, and to expect Pence to "take some lumber to Joe" Biden in the convention's concluding speech on Wednesday night.

"He does it with a smile on his face," the official said.

Pence is not expected to spend much time going after Kamala Harris, the Democratic nominee for vice president, according to the official.

The vice president will deliver his speech from Fort McHenry in Maryland. The raising of the American flag at the fort during the War of 1812, which signaled American victory over the British in the Battle of Baltimore, was the inspiration for Francis Scott Key's "The Star-Spangled Banner."

The vice president's remarks are still being written, but he plans to steep his remarks in patriotic tones and will make a particular reference to the National Anthem, a senior Republican official told CNN's Jeff Zeleny. Pence is expected to repeat his call for standing during the anthem -- as a sign of respect for the flag -- and use that in his Wednesday night remarks.

Convention speakers have spoken generally about ongoing protests against brutality, largely decrying their cause as a liberal one and defending the police.

The biggest exception so far has been South Carolina Republican Sen. Tim Scott, who invoked the names of George Floyd and Breonna Taylor -- two unarmed African-Americans killed by the police -- during his speech Monday night.

Tuesday night in Kenosha, Wisconsin, a city where demonstrators have been protesting the police shooting of Jacob Blake, two people died and another person was injured in an overnight shooting.

Kenosha County Sheriff David Beth told The New York Times the sheriff's office is investigating whether the shooting had resulted from a conflict between demonstrators and a group of men with weapons who were protecting businesses.

Pence will also address the racial unrest in America in his speech at Fort McHenry, according to the senior Republican official.

He will make a particular mention of the violence unfolding in Wisconsin, the official said.

Before the Tuesday night violence, White House chief of staff Mark Meadows told Fox News Tuesday night that he "offered assistance in the form of additional National Guard help ... But today that request was denied by the governor."

"We will NOT stand for looting, arson, violence, and lawlessness on American streets. My team just got off the phone with Governor Evers who agreed to accept federal assistance (Portland should do the same!) (...)TODAY, I will be sending federal law enforcement and the National Guard to Kenosha, WI to restore LAW and ORDER!" Trump tweeted.

But just after Trump's tweet, Sarah Hoye, a deputy chief of staff for Evers, said the offer was made for "federal assistance," but that it was declined for a second day in a row on Wednesday, citing an increase in the deployment of state National Guard personnel.

Throughout demonstrations across the country protesting police brutality, Trump has advocated for Democratic mayors and governors to permit federal forces, such as the National Guard, to be sent in to quell demonstrators.

Conway is among the list of scheduled speakers at the RNC Wednesday evening, speaking just a few days after she abruptly announced she would be leaving her White House job.

In 2016, Conway became the first female campaign manager to win a presidential race. After the election, she became counselor to the President and has remained one of the President's longest-serving advisers.

Conway announced Sunday evening she will leave her job at the White House at the end of the month while her husband, George Conway, said he was withdrawing from the anti-Trump organization, The Lincoln Project, with both citing a need to focus on their family.

Conway's speech on Wednesday will mark her second appearance at the 2020 GOP convention.

On Tuesday, she was featured in a short video with other women in leadership positions across the Trump campaign and the Trump administration.

Conway is among a list of standout women in GOP leadership roles expected to speak on Wednesday. South Dakota Gov. Kristi Noem, Iowa Sen. Joni Ernst and Rep. Elise Stefanik, the youngest Republican ever to be elected to Congress, are also scheduled to speak.

It appears to be part of a larger appeal to bring more women into the party amid fears that their support for the GOP and Trump is eroding. According to several national polls conducted over the summer, the gender gap among voters is near historic highs.

Grenell currently serves as the US Special Presidential Envoy for Serbia and Kosovo Peace Negotiations. He previously served as US ambassador to Germany during the Trump administration, and earlier this year, the President brought Grenell in for a short stint as the acting Director of National Intelligence.

In the job, Grenell was cast as someone who sought to uncover and oust those officials who appeared to be disloyal to the President.

During his three months in the role, he oversaw controversial firings of top career officials, a re-structuring of several parts of ODNI, a deeply acrimonious relationship with overseers in Congress and the declassification of documents from the Obama administration that fueled the "Obamagate" conspiracy theory amplified by Trump and his allies.

And in his final hours as the top US intelligence official, Grenell took a last swipe at congressional Democrats and declassified more documents tied to the origins of the Russia investigation.

As acting DNI, Grenell was thought to be the first openly gay cabinet member.

During Grenell's final cabinet meeting before his departure, Trump praised the acting DNI, saying, "I think you'll go down as the all-time great acting ever, at any position."

Despite Trump and Meadows backing another candidate, Cawthorn won the western North Carolina runoff and was eventually congratulated by Trump.

A staunch conservative who supports Trump, Cawthorn was partially paralyzed in a 2014 car accident. He is a motivational speaker and filed to start a real estate investment company last year. Inside Elections with Nathan L. Gonzales rates the 11th District as Solid Republican.

If elected in November, Cawthorn would become the youngest member of Congress.

In August, Cawthorn faced criticism for resurfaced Instagram posts of his 2017 visit to Adolf Hitler's vacation house in Germany known as the "Eagle's Nest," in which he referred to Hitler as "the Fuhrer" and said the visit was "on his bucket list for a while."

"Strange to hear so many laughs and share such a good time with my brother where only 79 years ago a supreme evil shared laughs and good times with his compatriots," the caption states.

Cawthorn has defended the posts and said he denounces White nationalism.