What to watch on the Republican convention's final night 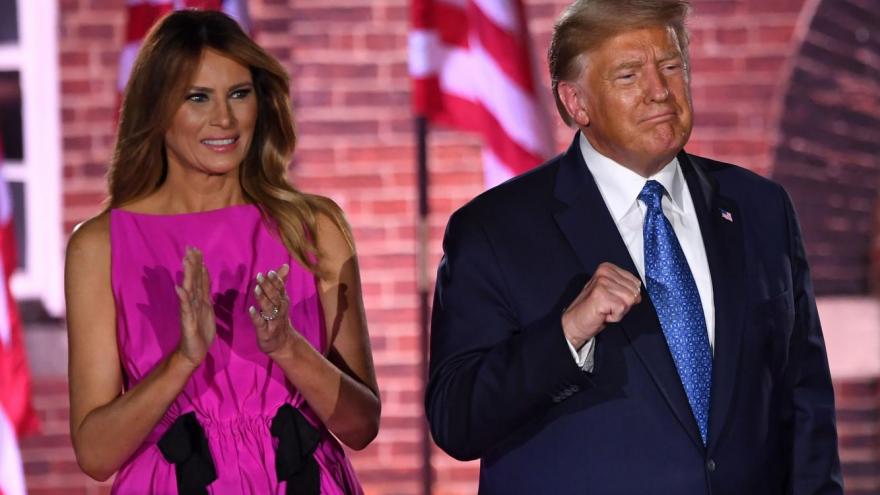 (CNN) -- The fourth and final night of the Republican convention on Thursday will feature President Donald Trump's speech officially accepting the Republican nomination for president.

Expect fireworks. Expect speakers to repeatedly reference the "liberal mob" and "socialism" when referring to Democrats. Expect efforts to appeal to groups of people the GOP feels it needs to entice into the party -- such as minority groups, women, swing-state voters. And expect a gathering of (many) more than 50 convention-goers, flouting DC public health recommendations amid the coronavirus pandemic.

Similar to the first three nights, some speeches are expected to take place at an audience-less auditorium. But before closing out the week's festivities, Trump is expected to deliver a speech to a large crowd from the South Lawn of the White House, breaking with tradition among US presidents not to mix official functions in the White House with overtly political ones.

The main event of the night is Trump's speech -- his moment to further define his plan for the American future and pitch it to households across the country.

Thursday night's theme is "Land of Greatness," and White House sources say to expect the President to attempt to highlight the differences between the Democratic Party and what Trump will offer.
"(H)e's really going to draw a contrast between him and the Democrat party and he's going to frame this election as a choice: which America do you want to be a part of?" White House press secretary Kayleigh McEnany said on Fox Business. "One where there's law and order in the streets or anarchy? One where there's a great economic comeback, an American recovery, or one where you have onerous regulation and over-taxation and a struggling economy?"

Ahead of his speech, the President is scheduled to hold a private afternoon fundraiser with supporters at the Trump International Hotel in Washington, located a few blocks from the White House. It will raise $10 million for Trump Victory, according to the Republican National Committee.

Trump will then give his acceptance speech from an elaborate stage on the South Lawn of the White House, after he's introduced by Ivanka Trump. The speech is expected to draw an audience between 1,000 to 1,500 people, according to outgoing counselor Kellyanne Conway, and it's expected to conclude with fireworks.

Washington, DC, has capped gatherings to 50 people, but the White House is on federal land and not subject to any of the District's laws or health restrictions.

Friday's speech will rank as one of Trump's biggest events amid the coronavirus pandemic since his ill-fated rally in Tulsa, Oklahoma, back in June.

"Anyone in close proximity to the President will be tested," a White House official said when asked about precautions for the event.

The large gathering comes after the RNC's concluding speeches on Tuesday and Wednesday with a majority of audience members not wearing masks.

There were questions on Thursday about whether Trump would postpone his acceptance speech in the wake of Hurricane Laura, which barreled into the Gulf Coast Wednesday night. Campaign officials say the address will happen as scheduled.

The President visited the Federal Emergency Management Administration's offices in Washington Thursday afternoon for a briefing on the storm, and he plans to mention the hurricane during his speech, the campaign confirmed to reporters.

Another issue looming over the convention has been the ongoing demonstrations against police brutality across the country. Throughout most of the convention speakers' remarks, Republicans repeatedly blamed Democrats for not running their cities well enough to quell violence.

Demonstrations in Kenosha, Wisconsin, over the police shooting of Jacob Blake, turned deadly Tuesday night when two people were shot dead and another was injured. The suspect charged on Wednesday is a 17-year-old vigilante who was on the streets with a gun. His social media portray a young white man with an affinity for guns, who is pro-police and a supporter of the President.

The campaign told reporters on Thursday Trump is also expected to address racial unrest, including protests in Wisconsin. But the campaign did not say whether the President would specifically address Blake's shooting.

A White House official says efforts have been made to connect Trump with the family of Blake. The President has yet to comment directly on the case. But officials have been waiting on more details from federal and state investigators.

In June, Cotton wrote an op-ed for The New York Times titled "Send In the Troops," which claimed the Insurrection Act could be invoked to deploy the military across the country to assist local law enforcement with unrest sparked by the death of George Floyd. Several Times staffers protested the paper's decision to publish the piece on its platforms. And the Times later said the piece did not meet the newspaper's standards.

In 2018, Trump commuted the prison sentence of Alice Marie Johnson, a first-time nonviolent drug offender, a week after Kim Kardashian West pleaded her case during an Oval Office meeting.

Johnson, who had already served 21 years of a life sentence, was convicted on charges of conspiracy to possess cocaine and attempted possession of cocaine.

Now Johnson is a senior fellow with the Texas Public Policy Foundation's Right on Crime initiative.

Johnson is likely to testify to the President's criminal justice reform efforts, which Trump was initially hesitant to move forward with.

But among Trump's more than two dozen acts of clemency, Trump has absolved the crimes of several old friends and prominent conservatives, including Roger Stone, Joe Arpaio and Dinesh D'Souza.

Earlier this week, the convention aired a video from the White House of Trump pardoning Jon Ponder, a man who robbed a bank and used his time after incarceration to start a reintroduction program for former prisoners.

The family of Kayla Mueller

After the convention broadcast a video from the White House of the President meeting with American hostages repatriated from abroad during the Trump administration, Thursday's programming will feature the family of Kayla Mueller.

Mueller traveled to the Turkey/Syria border to work with refugees. She was taken hostage by ISIS in Aleppo, Syria, in 2013 after she visited a hospital, and was reportedly raped by ISIS leader Abu Bakr al-Baghdadi. The family confirmed Kayla's death in 2015 but her body has not been recovered.

In 2019, the military proceeded with an operation to kill al-Baghdadi, which was named after Mueller.

"The chairman of the joint chiefs of staff named the operation that took down al-Baghdadi after Kayla Mueller, after what she had suffered," White House national security adviser Robert O'Brien said at the time of the raid, adding, "That was something that people should know."