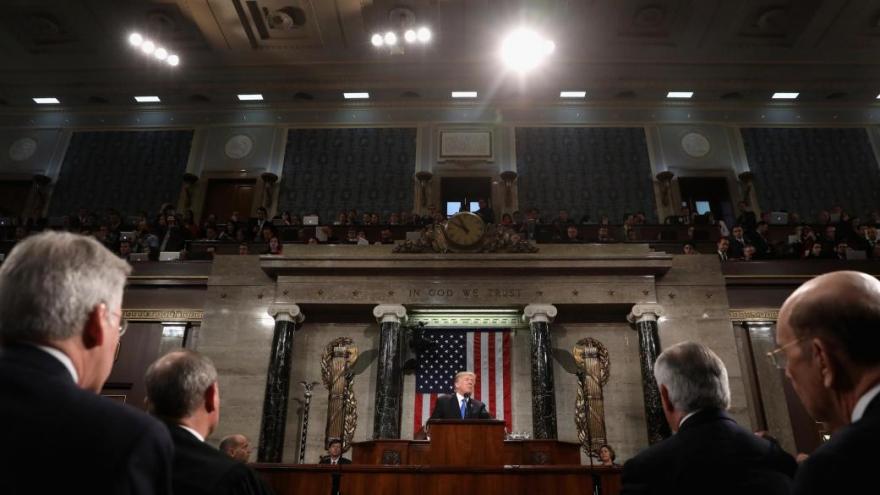 President Donald Trump is set to deliver his third official State of the Union address to the nation from the US Capitol on February 2 at 9 p.m. ET, the night before the Senate is scheduled to render its verdict on his impeachment trial.

(CNN) -- President Donald Trump is set to deliver his third official State of the Union address to the nation from the US Capitol on Tuesday at 9 p.m. ET, the night before the Senate is scheduled to render its verdict on his impeachment trial.

Trump has used past addresses to highlight his administration's victories, target his political enemies and push forward on efforts to fulfill his vision for the country.

But this Tuesday, Trump is expected to underscore what his administration has done and what he claims Democrats have failed to do in the unique context of impeachment and election season.

The President is banking on the strong US economy and trade deal victories to carry his reelection campaign to a win in November, and he's sure to highlight his wins on Tuesday.

His approval rating among voters stands at 45% according to a recent CNN poll conducted by SSRS -- no worse than his approval rating in December and the highest it's been since July. And in December, 76% of individuals polled said they rated the economy very or somewhat good, indicating a shifting tide in Americans' economic outlook, which had remained tepid in the wake of the recession.

Here's what to watch for during Tuesday's State of the Union:

Trump aides had once hoped the address would be an opportunity for vindication following a Senate acquittal, but the Senate won't hold its final vote on charges of abuse of power and obstruction of Congress until Wednesday -- the day after the President is scheduled to deliver his speech.

White House deputy press secretary Hogan Gidley said Tuesday that the word "impeachment" is not in the President's State of the Union speech, but suggested that it could be added to a later draft.

"I've read through the speech, and I've not seen the word impeachment. As he likes to say, 'We'll see what happens,' " he told reporters.

Unlike President Bill Clinton, who apologized to the country after he was acquitted, people close to Trump said they anticipated he will continue to proclaim his complete and total innocence

"I don't see the President making a big statement one way or another that would indicate anything different than what he's been saying for many months," one Republican close to Trump said.

A senior administration official laying out plans for the speech wouldn't divulge whether the President would bring up impeachment during his remarks, but they did say the speech isn't being written "in a vacuum" and "it wouldn't be out of the ordinary for the speech to evolve before it's delivered."

Meanwhile, a handful of Republican senators said they hope Trump steers clear of impeachment talk during his address to the bipartisan audience.

Staunch ally Sen. Lindsey Graham of South Carolina said it would be "smart" to focus on other issues, encouraged Trump to be "positive" and posited that "most people" are ready to move on from impeachment.

The overall theme of Trump's speech will be the "Great American Comeback," the senior administration official said. The President is expected to focus on what he sees as victories for his administration through the lens of election issues, such as the economy, health care and national security.

The President is also expected to draw contrast between his beliefs and the proposed policies of Democrats.

Specifically, the official said Trump is expected to contrast his health care policies with those on the "socialist" left, presenting a "sharp difference" with policies such as "Medicare for All," which has been touted by some Democratic presidential candidates.

Trump's speech is, of course, expected to be delivered in the presence of several members of Congress who are often at odds with the administration's policies. However, this year's speech will be a markedly more contentious year between the President and Democrats.

It will likely mark the first time Trump and House Speaker Nancy Pelosi have been in the same room in months. Their relationship became more tense after Pelosi began the impeachment proceedings, and, according to a Pelosi spokesman, the two have not spoken since the October 16 meeting in which Trump insulted Pelosi, including calling her a "third-grade politician," before she and other top Democrats walked out and later accused the President of having a "meltdown."

It will also likely mark the first time Trump will be in the same room as some of his Democratic opponents running for president. He's used recent interviews and speeches to unleash a litany of insults and attacks on his potential opponents, but the official previewing Trump's address wouldn't say whether he would do the same while speaking in the Senate chamber.

"I won't preview if he's going to call anybody out but I think the President would be entirely comfortable with that," the official said.

Coverage of the Democrats' Iowa caucuses dominated televisions Tuesday morning, potentially increasing the odds that Trump will use his high-profile speech to swipe at potential rivals.

Checking in on past promises

The President has used past State of the Union addresses to push new policy proposals, such as tax cuts, an infrastructure plan and health care revisions. Some of these proposals have been successful, while others have not.

During the 2019 State of the Union, Trump called for "the great rebuilding of America's crumbling infrastructure." But he held off on moving ahead, saying he would move on it only after the US-Mexico-Canada trade agreement was passed by Congress. He signed the pact into law last week.

In 2018, Trump touted the success of his new tax cuts, calling them the "biggest tax cuts and reforms in American history" and claiming they would be a boon to the economy. However, a combination of the reduced revenues due to the tax cuts and record-setting defense spending helped balloon the federal budget deficit to $1 trillion last year. More recently, the President has said he is considering cuts to entitlement programs as a means of debt reduction.

And Trump, like other US presidents, has occasionally highlighted a potential moonshot policy. Last year, he vowed to end the HIV/AIDS epidemic by 2030 at the dais during the State of the Union. In December, the administration vowed to increase access to pre-exposure prophylaxis, or PrEP, drugs. According to a Centers for Disease Control and Prevention report published in December, progress was made in reducing the number of HIV infections prior to 2013. However, since then, the CDC said, the number has stalled at about 38,000 new infections every year.