What to watch for at Thursday's prime-time January 6 hearing 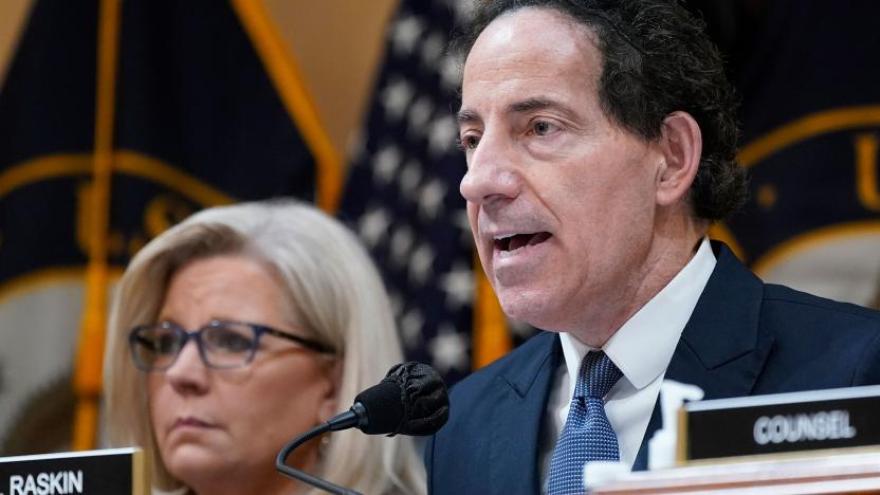 Vice Chair Liz Cheney, R-Wyo., left, listens as Rep. Jamie Raskin, D-Md., speaks as the House select committee investigating the Jan. 6 attack on the U.S. Capitol holds a hearing at the Capitol in Washington, on July 12.

(CNN) -- The House select committee investigating January 6, 2021, is returning to prime time for its final planned hearing this month that will seek to show in minute-by-minute detail how former President Donald Trump failed to act while the US Capitol was under attack.

The committee's focus at Thursday's 8 p.m. ET hearing will be on the 187 minutes that elapsed between Trump concluding his speech at the Ellipse at 1 p.m. when he told his supporters to march to the Capitol to when Trump released a video at 4:17 p.m. telling the rioters to leave the Capitol.

Committee aides say that the panel will show how Trump "refused to act to defend the Capitol" while rioters were attacking it. The committee has spoken with multiple former Trump aides who were with him that day -- including former White House counsel Pat Cipollone -- and their video depositions are expected to be used to help tell the story of what was going on inside the White House on January 6.

Cipollone, for instance, told Trump's chief of staff Mark Meadows that Trump needed to intervene or else "people are going to die," former Meadows aide Cassidy Hutchinson previously testified. Meadows responded by telling Cipollone that Trump "doesn't want to do anything," Hutchinson said, and that Trump even agreed with the rioters chanting about hanging Vice President Mike Pence.

The House is also expected to show clips of video outtakes of Trump recording a message to his supporters on January 7, 2021, the day after the riot.

Previous reporting from CNN and others, as well as excerpts from committee depositions that have been publicly released -- have detailed how Trump was watching television outside the Oval Office as rioters breached the Capitol walls. Before Trump released his video telling the rioters to go home, he sent out several tweets that did not tell them to leave the Capitol -- as well as one attacking Pence for not joining his scheme to try to overturn the 2020 election.

On Thursday, Rep. Adam Kinzinger, a member of the January 6 committee who will be leading the hearing, tweeted new video clips from depositions of Trump aides describing how he watched the Capitol riot unfolding on TV in his private dining room.

Here's what to watch in the committee's prime-time hearing:

Connecting the dots back to Trump

Thursday's hearing, the committee's eighth over the past two months, is a culmination of sorts for the January 6 panel, which has made a point to put Trump front and center at every hearing.

The panel has used those around Trump repeatedly to show how he was told he lost the election but refused to listen, and how he played a key role in the multiple efforts to try to overturn the election leading up to January 6.

On Thursday, testimony from those same aides is likely to show how Trump was urged to stop the violence but did not do so.

The committee has already played testimony from Cipollone's video deposition in which the former White House counsel said he urged pushed for Trump to release a statement telling people to leave the Capitol.

"I felt it was my obligation to continue to push for that and others felt it was their obligation as well," the former White House counsel responded.

The committee has also spoken with others who were around Trump on January 6, including his daughter Ivanka Trump, former White House press secretary Kayleigh McEnany and former Pence national security adviser retired Gen. Keith Kellogg.

Kellogg has testified about how he urged Ivanka Trump to go and speak with his father in the hope that she could get through to him, according to excerpts of his testimony that have been released as well as prior reporting.

Thursday's witnesses are expected to be two former Trump White House officials who resigned after the deadly attack.

In testimony the committee has played, Pottinger told the committee he made his decision to resign when a staffer brought him a printout of Trump's tweet attacking Pence. "I read that tweet and made a decision at that moment to resign. That's where I knew that I was leaving that day," Pottinger said in the video deposition.

According to The New York Times, Pottinger did not speak to Trump that day, but he told Meadows the National Guard had still not arrived at the Capitol as the violence was unfolding.

Matthews, the former deputy press secretary, was one of several White House aides calling for Trump to condemn the violence. According to a source familiar with her decision, Trump's inaction is what led to her resignation that night.

Matthews met with the committee members or staffers three times before her public testimony, and she told the committee that Trump's tweet about Pence "was pouring gasoline on the fire by tweeting that," according to a video clip of her deposition played at a prior hearing.

Matthews also did not speak to Trump on January 6, but a source told CNN she will be able to shed some light what was happening in the White House that day, including information from conversations involving staffers in the room with Trump.

Rep. Bennie Thompson, who tested positive this week for Covid-19, will still perform his duty as the committee's chairman at Thursday's hearing -- albeit remotely, aides say.

After Thompson's positive test was announced, his office made clear that the hearing would still go forward even if the Mississippi Democrat was unable to attend in person, though it was unclear whether the chairman would play any role.

Aides said Wednesday that Thompson is "feeling OK" and will still chair the hearing virtually.

Kinzinger and Democratic Rep. Elaine Luria of Virginia will lead Thursday's presentation, according to committee aides.

"We'll go through pretty much minute by minute during that timeframe" during the 187 minutes of the Capitol insurrection, Luria said Sunday on CNN's "State of the Union."

"He was doing nothing to actually stop the riot," she added.

The panel's Republican vice chairwoman, Rep. Liz Cheney of Wyoming, will also play a role as she has in each of the seven previous hearings.

Final hearing of this series but possibly not the last

Committee aides again declined to say whether there would be any more hearings following Thursday's presentation but left the door open to that possibility.

The panel has consistently maintained that its investigation is still ongoing and has framed Thursday's hearing as a season finale of sorts.

"We indicated in June that we were holding this series of hearings to lay out findings to tell you a story," a committee aide told reporters on Wednesday. "We also said at the beginning of the hearings that we have far more information than we could ever present to the American people in a single series of hearings."

"All I would say is nothing is off the table. I think our members have all indicated there is potential for future hearings. Certainly when we are releasing any sort of Select Committee report, you can expect to see the committee gather around that," the aide added.

That echoes what Luria told CNN on Sunday.

"Whether it's in the form of hearings or other methods to present the evidence, but you know, we have a responsibility to present the things that we've uncovered and we are talking about how the best way to do that as a board after this hearing," she said.