What the Supreme Court's ruling means for DACA participants and immigrants 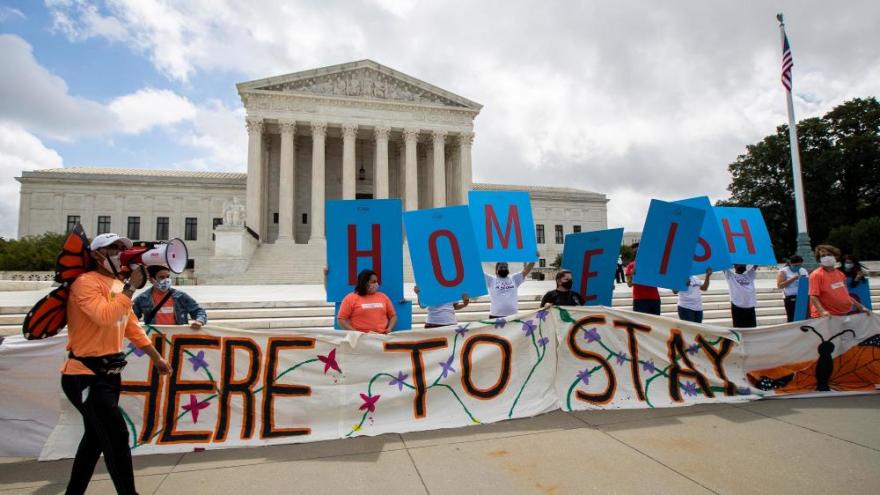 (CNN) -- The Supreme Court delivered a blow to President Donald Trump Thursday when it blocked the administration's attempt to end an Obama-era program shielding undocumented immigrants who came to the US as children from deportation.

The long-anticipated ruling provides hundreds of thousands of recipients of the Deferred Action for Childhood Arrivals program temporary relief, however, it doesn't rule out future attempts to terminate the program.

Here's what to know:

The program, established in 2012, protects undocumented immigrants who were brought to the US as children from deportation and allows them to work legally in the US.

To be eligible, applicants had to have arrived in the US before age 16 and have lived there since June 15, 2007. They could not have been older than 30 when the Department of Homeland Security enacted the policy in 2012. Recipients are required to renew their protections every two years. The program doesn't provide permanent protection or a pathway to citizenship.

There are nearly 650,000 DACA recipients, the majority of whom are from Mexico.

What does this mean for DACA recipients?

The decision provides some reprieve to the thousands of people enrolled in the program. For now, beneficiaries of the program can continue to live and work in the United States without fear of deportation.

Does the ruling allow for new DACA applicants?

Legal experts believe that the decision not only allows renewals in the program to continue for now, but clears the way for new applicants to apply to the program.

"The door opened today," Karen Tumlin who runs the Justice Action Center, an immigrant rights group, said after the decision came down. She said that she is advising her clients to speak with legal service providers and begin the process to prepare to apply.

"We know that DACA is a transformational program and today's decision allows young people who have qualified for DACA but who were prohibited from applying to do so for the first time," she said.

CNN reached out to US Citizenship and Immigration Services, an agency within DHS charged with processing applications, for clarity.

USCIS Deputy Director for Policy Joseph Edlow said in a statement the "court opinion has no basis in law and merely delays the President's lawful ability to end the illegal Deferred Action for Childhood Arrivals amnesty program."

Technically, Chief Justice John Roberts wrote that the Trump administration's rescission was vacated and he sent the case back down to the lower courts.

"I think there's a good argument that SCOTUS's decision has also opened the door to new applications -- at least until the Trump administration closes it," CNN analyst Steve Vladeck said.

Lawyer Andrew Pincus, who filed a brief in the case in favor or DACA recipients, stressed that the court's decision "reinstates in full the 2012 Obama policy meaning that the government is obligated to accept new DACA applications."

But there may be some sorting out to do. The case is technically remanded back to the lower court and that takes time.

It is also worth noting that applicants to the program must turn over personal information in order to apply. They may be skittish to do this given the fact that the Trump administration could move again to terminate the program.

What did the justices say?

The 5-4 ruling was written by Roberts and joined by Justices Ruth Bader Ginsburg, Elena Kagan, Stephen Breyer and Sonia Sotomayor. The ruling emphasizes that the administration failed to provide an adequate reason to justify ending the DACA program.

"We do not decide whether DACA or its rescission are sound policies," Roberts wrote in the majority opinion. "The wisdom' of those decisions 'is none of our concern.' We address only whether the agency complied with the procedural requirement that it provide a reasoned explanation for its action."

But the majority opinion will send the case back down to the lower courts which could be dealing with the case until after the election.

Will DACA stay in place indefinitely?

The Supreme Court's ruling Thursday was specific to how the program was rescinded, not the program's legality. It's possible, then, that the Trump administration could go back and try to end DACA again, but they have a narrow window to do so given the upcoming election. Roberts acknowledged that possibility.

"The appropriate recourse is therefore to remand to DHS so that it may consider the problem anew," Roberts wrote, citing failures by the administration to in part consider the hardship to DACA recipients.

"The basic rule here is clear: An agency must defend its actions based on the reasons it gave when it acted. This is not the case for cutting corners to allow DHS to rely upon reasons absent from its original decision," he wrote.

Professor Stephen Yale-Loehr of Cornell Law School explained: "The administration may try to terminate the DACA program with a better justification, but that will take months or years."

So the ruling was on technical grounds, but is DACA legal?

Justice Clarence Thomas, dissenting, said: "Today the majority makes the mystifying determination that this rescission of DACA was unlawful. In reaching that conclusion, the majority acts as though it is engaging in the routine application of standard principles of administrative law. On the contrary, this is anything but a standard administrative law case."

Justice Brett Kavanaugh wrote separately acknowledging the plight of immigrants, but saying he did not agree with the majority opinion. "They live, go to school, and work here with uncertainty about their futures," he wrote.

He noted that that "the only practical consequence of the Court's decision to remand appears to be some delay" because the court's decision "seems to allow the Department on remand to relabel and reiterate substance."

What has Trump said about DACA?

Trump has flip-flopped on the issue, expressing sympathy for the group while also vowing to dismantle the program. He vowed to end the program on the campaign trail, but once he took office he suggested he might take a softer stance.

Even after his administration announced its plans to phase out DACA, Trump seemed to signal a desire for Congress to step in and save it, tweeting: "Does anybody really want to throw out good, educated and accomplished young people who have jobs, some serving in the military? Really!"

Last November, Trump reiterated that stance, saying he'd strike a deal with Democrats for recipients to stay after calling some in the program "tough, hardened" criminals. To enroll in the program, recipients can't have committed a serious crime.

What's it mean for the election?

Immigration is a pillar of Trump's campaign platform and part of that includes his pledge to end the DACA program. The President had been banking on the Supreme Court, but the ruling now takes him back to square one. The decision also pits him directly against presumptive Democratic nominee Joe Biden, who was the vice president when the DACA program was established.

Trump called the decisions coming out of the Supreme Court "horrible" and "politically charged."

"These horrible & politically charged decisions coming out of the Supreme Court are shotgun blasts into the face of people that are proud to call themselves Republicans or Conservatives. We need more Justices or we will lose our 2nd. Amendment & everything else. Vote Trump 2020!" Trump tweeted.

Biden struck a different tone, applauding the decision and saying in a statement: "The joy of today's victory does not erase the difficult road ahead. We know that much work remains to be done. But I will continue to stand with DACA recipients, their parents, and their families at every step, and in November, joined by millions across this country, we will reject the President who tried to rip so many of our family members, friends, and coworkers out of our lives."

Why can't DACA recipients get legal status through other means?

Many undocumented immigrants who fall under this group are unable to obtain legal status on their own because they were either brought into the country illegally or they overstayed their visas. That often precludes them from becoming a lawful permanent resident because one of the requirements is having entered -- and resided in -- the country legally.

Can Congress give recipients protection?

The short answer is yes and unlike the DACA program, it'd be permanent. But moving legislation during an election year will be challenging and the issue is likely to face an uphill battle in the Republican-controlled in Senate.

It's been a year since the US House of Representatives introduced and passed a bill that would in part provide a pathway to citizenship for DACA recipients, but it hasn't come up for a vote in the Senate.

The measure, dubbed the "Dream and Promise Act of 2019," provides some reprieve to so-called Dreamers by allowing those who qualify to gain lawful permanent resident status, which is usually out of the question for many undocumented immigrants who came to the US as minors.

Trump may try to strike a deal, as he has in the past, but House Speaker Nancy Pelosi has already indicated she's unwilling to negotiate on certain points.