What the interim US-China trade deal means -- and doesn't 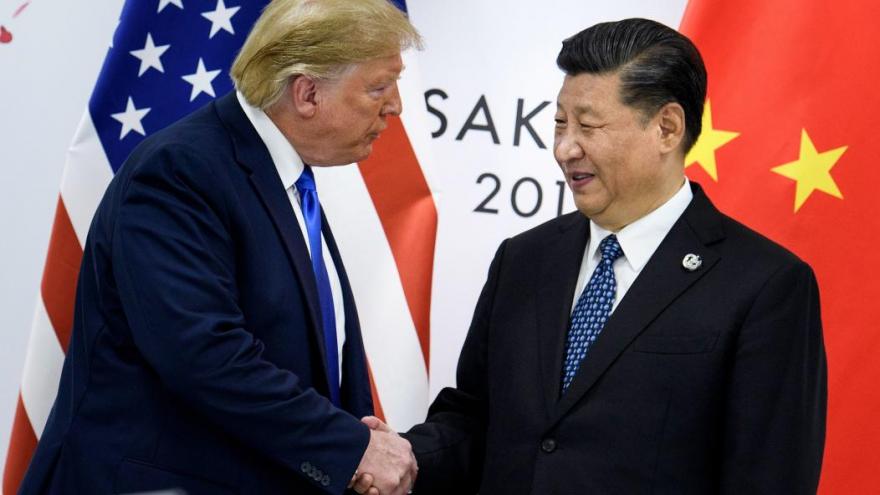 After a year-and-half of fraught negotiations that has slowed global growth and hurt American farmers and consumers, the United States and China have reached an interim trade deal bypassing an economic calamity -- for now.

(CNN) -- After a year-and-half of fraught negotiations that has slowed global growth and hurt American farmers and consumers, the United States and China have reached an interim trade deal bypassing an economic calamity -- for now.

The two countries on Friday agreed to halt additional tariffs on nearly $160 billion of Chinese consumer electronics and toys that were set to take effect on Sunday morning, reduce economic penalties on goods that were imposed in September by half and unveil new commitments by the Chinese to buy US farm and other products.

But details of the agreement hailed by President Donald Trump as "phenomenal" still remains largely unknown, leaving close US-China watchers to describe it as "He said, Xi said," and others wondering what exactly is included in a limited agreement among the economic superpowers.

"We don't have a document, and until we have a document, we don't know what's in the agreement," said Craig Allen, president of the US-China Business Council. "I wouldn't hold your breath. It might take a while."

The rush to finalize a deal in the last two weeks comes as the President is confronting the prospect of impeachment, while seeking to boost his chances of re-election in 2020 with the help of farmers, a key constituency, who his trade war has hurt the most.

"Rather than a comprehensive deal, he was settling for the one thing that he needed most to secure his re-election, which was a deal on agricultural exports that would boost US exports from farm country to a level higher than they had been before the trade war," said James Lucier, managing director at Capital Alpha Partners, in a note to clients.

While retailers and business leaders immediately breathed a sigh of relief, acknowledging the preliminary offer as a "small step" in the "right direction," others dismissed the announcement as a smaller version of the deal the President announced prematurely in October.

"A Phase One deal, while a step in the right direction, does little to alleviate the larger trade issues between the US and China that will no doubt continue to weigh on global markets well into 2020," said Lindsey Piegza, chief economist at Stifel.

In the Oval Office, Trump boasted the trade pact would be "one of the greatest deals ever."

"I say affectionately that the farmers are going to have to go out and buy much larger tractors because it means a lot of business, a tremendous amount of business," Trump said.

The President said the US would use the remaining tariffs as leverage in the second phase of the negotiations with China.

"The tariffs will largely remain," he said. "We'll use them for future negotiations on a phase two deal."

That was a slightly different message than what Chinese officials relayed in Beijing, saying the US had agreed to reduce additional tariffs on Chinese products in phases.

And Trump's lead negotiator, US Trade Representative Robert Lighthizer, told reporters, according to CNBC, that it would be wise to be skeptical of whether China would deliver on certain agreements. He also said there would be no new tariffs as long as Beijing negotiates in good faith.

Looking for specifics and guarantees

Adding uncertainty to the initial agreement was the noted reluctance by Chinese officials to confirm any details offered by Trump, including on $200 billion of purchases of American farm and other products by China.

"China trade negotiators confirmed that the two had sides had agreed the text of a deal but refused to confirm any specific detail," said Michael Pearce, senior US economist at Capital Economics in a research note. "It's not clear exactly how much China has pledged to step up its purchases of US goods."

A senior administration official on Friday told reporters that China had promised in the trade pact to increase their purchase of manufactured goods, agricultural goods, energy products and services by at least $200 billion over the next two years, including $40 billion to $50 billion in farm commitments.

The official said they couldn't speak to why the Chinese didn't address specific promises, but that those commitments included in the trade pact were enforceable and could be subject to penalties in the form of tariffs.

Those unclear signals, however, left some farmer trade groups expressing doubt about the President's claims.

"China has yet to confirm this pledge or provide any details on how they will meet it," Brian Kuehl, co-executive director of Farmers For Free Trade said in a statement. "Our hope is that this is not another empty political promise to farmers."

"He has sold out for a temporary and unreliable promise from China to purchase some soybeans," said Schumer. "We've heard this song and dance from China before."

What about IP and technology?

US officials said in exchange China had agreed to make structural changes regarding priority items like intellectual property and forcing American companies to hand off their technology to compete in China. But it's not immediately clear what has precisely been agreed to between the two sides.

"Right now all we have are the vague outlines of an apparent agreement," said Bernard Baumohl, chief global economist at The Economists Outlook Group. "There's still a way to go before we can assess its substance. For one, the agreement has not even been vetted by lawyers and thus remains unsigned by both parties."

Officials from both countries pointed to necessary work ahead by negotiators to complete a legal review and translation as reasons for the lack of specifics before finalizing the deal. Both sides have pledged to do so as soon as possible.

National Economic Council director Larry Kudlow told reporters the deal would be signed at the ministerial level by Lighthizer and Chinese Finance Minister Liu He "in a few weeks."

Also left unclear is when the two sides will begin the second phase of their negotiation after Trump said talks would begin "immediately," and not after the 2020 election.

Lighthizer declined to specify a timeframe for reporters, while Kudlow said phase two "has already started." China, however said, it would depend on the implementation of phase one.