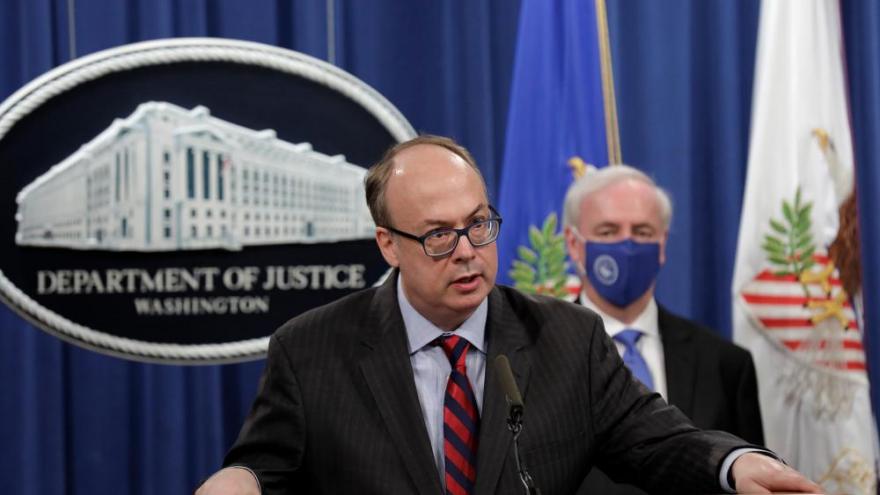 (CNN) -- Former Justice Department official Jeffrey Clark on Friday stonewalled the House select committee investigating January 6, responding to a subpoena demanding he appear for an interview with the panel, but not answering questions posed to him, sources familiar with his appearance told CNN.

Instead, Clark provided a letter from his attorney Harry MacDougald that claimed he could not provide testimony until a court declares that his interactions with former President Donald Trump are not protected under attorney-client privilege or executive privilege.

CNN has not obtained a copy of the letter, first reported by Politico, but confirmed its contents through a source with knowledge of the letter.

Committee Chairman Bennie Thompson said in a statement later Friday that he had considered and rejected Clark's claim that he didn't have to answer questions under subpoena.

"He has a very short time to reconsider and cooperate fully," the Mississippi Democrat said. "We need the information that he is withholding and we are willing to take strong measures to hold him accountable to meet his obligation."

"It's astounding that someone who so recently held a position of public trust to uphold the Constitution would now hide behind vague claims of privilege by a former President, refuse to answer questions about an attack on our democracy, and continue an assault on the rule of law," Thompson said.

He worked with former President Donald Trump's ex-lawyer Sidney Powell on a lawsuit against Georgia Republican Gov. Brian Kemp and Secretary of State Brad Raffensperger that aimed at overturning Joe Biden's win in the state.

It was among the dozens of unsuccessful lawsuits filed by Trump's legal team after his election loss in an attempt in court to gain traction on voter fraud.

Clark was one of the officials within the Justice Department pushing to pursue unfounded claims of voter fraud in the weeks after the November election, and, according to officials who interacted with him, was in touch with Trump repeatedly.

So far, Clark is one of only a few then-Trump administration officials to have received a congressional subpoena. Clark's appearance was delayed until Friday, after he parted ways with a lawyer who was preparing him to the House last week.

The appearance lasted about an hour and a half, during which time Clark and his attorney walked in and out of the room on several occasions. Neither Clark, nor MacDougald, would answer questions as they left.

Going into the session, Clark did not describe his level of cooperation with the panel.

"Mr. Clark is subject to a sacred trust -- one that is particularly vital to the constitutional separation of powers," Clark's lawyer wrote in his 15-page letter. "As a result, any attempts -- whether by the House or by the current President -- to invade that sphere of confidentiality must be resisted."

MacDougald also referenced Trump's lawsuit seeking to block the committee from obtaining more than 700 records related to January 6. He suggested that the committee delay its request for Clark's testimony until that lawsuit is resolved. On Thursday a federal judge heard arguments in that case and appeared deeply skeptical that Trump could block lawmakers from obtaining evidence that is relevant to their investigation.

Previously, Trump hasn't attempted to block former Justice Department officials from speaking to members of Congress about his election fraud antics, and Clark doesn't appear to have any extensive executive privilege shield available to him. Yet other officials from the Trump White House have delayed their testimonies, and Trump is already in court arguing to keep documents from his presidency private.

As a sympathizer to election fraud conspiracy theories, Clark became Trump's most useful asset inside the Justice Department in the days before January 6. Clark helped Trump devise a plan to oust the then-acting attorney general, place himself atop the department and have the DOJ intervene in Georgia to set aside its voting results in order to sway the state toward Trump.

When Clark's superiors learned of his scheming with Trump in early January, they threatened to resign en masse.

Democratic Rep. Jamie Raskin, a member of the committee who also served as a House manager for Trump's impeachment related to January 6, told CNN previously he was "very eager" for Clark's testimony.

"Clark had a lot to do with this plan for January 6," Raskin said, "and he also was apparently making a play to become the Attorney General, which caused a huge number of lawyers to say they would resign immediately. So we would get something like the Saturday Night Massacre that took place back during the Watergate period."

Raskin said the committee is interested in learning about any efforts behind the scenes at the Justice Department to oppose the certification of the Electoral College vote, the process that was interrupted when Trump supporters violently overran the Capitol.

Previously, the Senate Judiciary Committee released its own lengthy staff report detailing how Trump and his allies pressured DOJ to overturn the 2020 election. In that nearly 400-page report, Clark's name appears more than 200 times and casts him as the agency's pivotal figure helping Trump, according to other witnesses from the Justice Department.

In one particularly poignant scene, the report recounts a December 26 call that Clark received from then-acting Attorney General Jeffrey Rosen, who spoke at length with the Senate committee. Rosen wanted to know why Trump had mentioned Clark in a previous phone call. When Clark told Rosen he had previously met with Trump, Rosen called being "flabbergasted."

The Senate Judiciary Committee, which did not interview Clark for its investigation, described several other elected officials, lawyers working with Trump and even lower-level Justice Department employees who appeared to support Clark's efforts at DOJ.

The Senate report also noted a meeting just before Christmas Day where Trump met Clark and Republican congressmen at the White House.

But the report was unable to nail down the extent of coordination among the election fraud theorists without insight from inner-circle witnesses like Clark.

In addition to the characters around Trump, handwritten notes of a December 27 discussion between the President and top Justice Department officials document that Trump said he wanted to put Clark in a leadership role and that Republicans in Congress could promote Trump's election fraud theories. At the time of Clark's push, the DOJ had already determined the voter fraud theories were largely unfounded.

Trump's reference to Clark, an environmental lawyer temporarily filling the civil litigation leadership role at Justice "surprised" then-acting Deputy Attorney General Richard Donoghue "because Clark 'didn't have anything to do with the Department's election responsibilities,'" the Senate wrote, citing Donoghue's own testimony to the Committee.

Separately, Perry spoke to Donoghue about Clark as well, telling Donoghue he liked Clark and thought Clark could "do something about this," the Senate Judiciary Committee noted, again citing Donoghue's testimony.

By New Year's, Clark was asking for an intelligence briefing about election interference and sent Donoghue his proposal for the Justice Department to announce investigations into the vote in Georgia.

He and the DOJ leadership met with Trump on January 3. At that meeting, Donoghue and others told Trump there would be mass resignations at the Justice Department if the President were to fire the acting attorney general and put Clark in charge.

All of Clark's actions came at the end of December, "following personal communications with Trump, including at least one meeting that Clark attended in the Oval Office without the knowledge of DOJ leadership," the Senate Judiciary Committee wrote.

But they were not able to detail exactly what Trump has said. That work may be left for the House investigators.

Correction: An earlier version of the headline and story misspelled Jeffrey Clark's name.