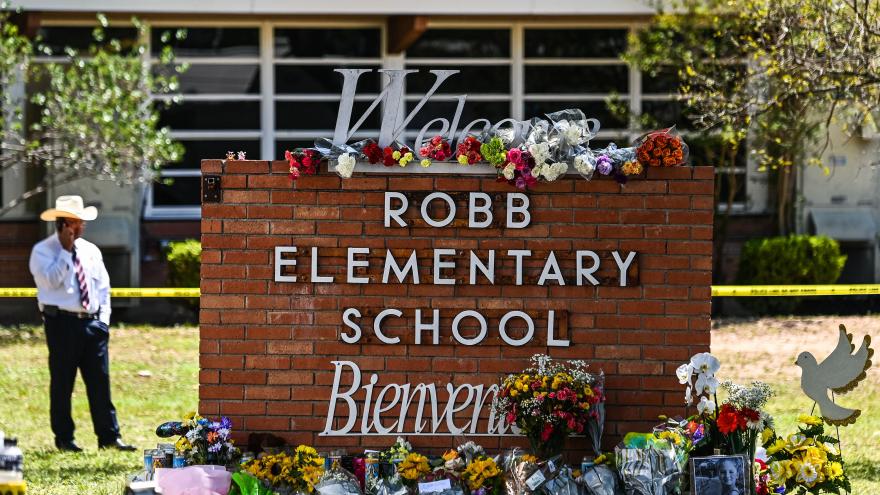 That was the front page headline on the Dallas Morning News on Wednesday morning after 19 children and two teachers were killed by an 18-year-old gunman.

It's a sentiment many people are feeling. The shooting at Robb Elementary School in Uvalde, Texas is the third mass shooting this week, according to the Gun Violence Archive, and comes days after high-profile shootings in Buffalo, New York and Orange County, California. With almost two dozen victims, it's one of the largest mass school shootings in the last decade.

"These are kids that are under 10 years old, a lot of the time. I don't even know how they begin to process it, I don't know how anybody of any age begins to process this," said David Hogg on CNN's New Day.

"This is something that never should have happened," said Hogg, who was a student at Marjory Stoneman Douglas High School in Parkland, Florida, when 17 people were killed by a gunman in 2018.

As people across the country mourn, here's what parents, educators and students who lived through past school shootings are saying in the wake of what has become a national epidemic.

'The next one is going to happen,' father says

Hearing about the deaths in Uvalde, he was brought right back to that day in 2018, he told CNN's Anderson Cooper on Tuesday.

He continued, "We know the next one is going to happen because we haven't done anything to fix it."

These days, Cameron Kasky is a student at Columbia University in New York. But he's also a survivor -- one of the students who was at the school shooting in Parkland in 2018.

In an appearance on CNN, he criticized the response of President Joe Biden and other politicians, saying that not enough is being done to pass common-sense gun safety laws.

"There's a new (shooting) every single day. And that's on a good day, because on the bad days there's quite a few," he said. "These students are going to go back into school soon and they are going to live lives and have childhoods and early adulthoods that are completely informed by this tragedy. From what I've seen with Parkland and with all these other horrible shootings, it changes people forever."

'We need to do something to save these kids,' Parkland survivor says

Hogg is a founder and board member for March For Our Lives, a student-led group that advocates for gun control legislation.

When a gunman entered Marjory Stoneman Douglas High School, he remembers hiding in a closet while more than a dozen of his peers died.

Six years before Hogg, Mary Ann Jacobs also hid in a closet -- during the Sandy Hook Elementary School shooting in 2012.

She remembers hearing the sound of gunfire while huddled with more than a dozen 9-year-olds and three colleagues, she said during a Wednesday press conference in Connecticut.

"Yesterday, I was right back in that closet, remembering the fear and horror we experienced trying to be brave for the kids we were with, while we were more frightened than we'd ever been in our lives," she said.

She continued, "How many more kids have to die in our schools before our federal lawmakers will act?"

Lori Alhadeff remembers getting the text message four years ago, reporting that shots had been fired at Marjory Stoneman Douglas High School.

Kids were running, and jumping over fences, she said during an appearance Wednesday on CNN's New Day. A sense of loss and fear came over her. That day, she waited hours for updates on her daughter Alyssa, answering questions about what she looked like and what she had been wearing.

Eventually, she found out: Alyssa had died, having been shot eight times.

"It is so horrific. It is so painful to find out," Alhadeff said. "My daughter Alyssa, who was only 14 years old, shot eight times in her English classroom. It's a parent's worst nightmare."

More than two decades ago, Tom Mauser's son Daniel was killed at Columbine High School, in Littleton, Colorado, during one of the most notorious school shootings in American history.

Tuesday night, after hearing of the shooting in Uvalde, he had trouble sleeping, he told CNN's Christiane Amanpour on Wednesday.

He continued: "It's really difficult to process the fact we still have this happening. We talk about it when it happens, and then we do nothing."