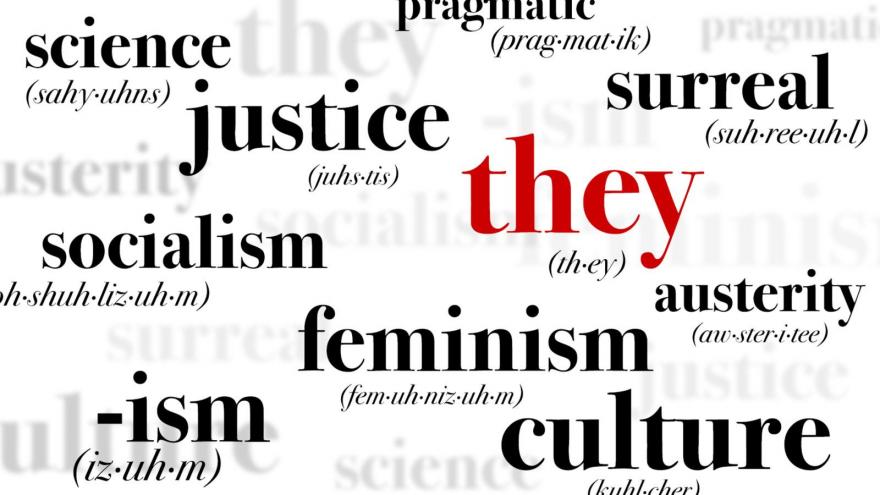 Merriam-Webster's 2019 word of the year is, they. Last year's word was justice. And the year before that, it was feminism.

A lot, if you ask the folks at Merriam-Webster.

Merriam-Webster's 2019 word of the year is they. Last year's word was justice. And the year before that, it was feminism.

Peter Sokolowski, a lexicographer and Merriam-Webster's editor at large, said that Merriam-Webster doesn't set out to capture the zeitgeist in its words of the year lists, like some other dictionaries and linguistic organizations do.

Instead, Sokolowski said that Merriam-Webster's word of the year is determined by data: it must have seen a significant increase in lookups on the dictionary's website and app from previous years.

But taken together, these words show how we grappled with issues of political ideology, social justice, and identity politics.

They remind us about the biggest news stories of the past 10 years and how many of them haven't gone away.

And they tell us about the broader shifts happening in our culture and big ideas that inspire us.

"What it tells me is that words matter -- that people pay attention," Sokolowski said. "People want to find more nuance, more history, more description, more accuracy in the definition."

Here's a look back at the past decade, as defined by Merriam-Webster's words of the year.

2010: austerity -- "Enforced or extreme economy," by one definition. This word kept coming up in news reports about the economic panic and protests triggered by the debt crisis in Greece, referring to pay cuts in the public sector, tax increases and other measures intended to prevent economic collapse.

2011: pragmatic -- At the time, Merriam-Webster wrote that the word could suggest a national mood, "an admirable quality that people value in themselves and wish for in others, especially in their leaders and their policies." But in hindsight, Sokolowski said it's just a word people look up a lot.

2012: socialism, capitalism -- This was an election year, and the word "socialism" was often thrown around in reference to Obamacare, as well as after party conventions and presidential debates. And when people looked up socialism, they usually looked up capitalism too.

2013: science -- It might seem odd that people were looking up such a basic word, until you remember the conversations we were having that year. Federal funding cuts threatened the future of innovation. Discoveries about the Higgs boson and successes in cloning human stem cells prompted philosophical and ethical debates. Climate change was treated like a subject up for debate, and science itself was facing a crisis of skepticism.

2014: culture -- Another extremely broad word. Merriam-Webster said it conveyed "a kind of academic attention to systemic behavior," and allowed us to isolate and talk about ideas, issues and groups. News outlets covered hookup culture, rape culture, car culture ... the list goes on.

2015: -ism -- So this one isn't technically a word. But Merriam-Webster said the suffix represents a group of words that were collectively looked up millions of times: socialism, fascism, racism, feminism, communism, capitalism and terrorism. With Bernie Sanders, Hillary Clinton and Donald Trump announcing presidential runs, and attacks like the one at a South Carolina church calling into question the definition of terrorism, it's easy to see why.

2016: surreal -- Merriam-Webster said people look this word up spontaneously in moments of shock and surprise, defining it as "marked by the intense irrational reality of a dream." The 2016 election comes to mind, but the dictionary also saw spikes after the Brexit vote, the Pulse shooting and Prince's death.

2017: feminism -- By one definition, it means "organized activity on behalf of women's rights and interests." This was the year of the #MeToo movement, of women's marches around the world. It was the year "Wonder Woman" and "The Handmaid's Tale" captivated viewers on screens big and small. Coincidence? Merriam-Webster says not.

2018: justice -- The word was at the center of some of the year's biggest stories: the Mueller investigation, Brett Kavanaugh's hearing in Congress, criminal justice reform, as well as the fights for racial, economic and gender equality.

2019: they -- We talked a lot about pronouns this year, and Merriam-Webster noticed. The word is increasingly used to refer to someone whose gender identity is nonbinary, showing up in email signatures, Twitter bios and conference name tags. In September, Merriam-Webster added that definition to its dictionary, noting that "there's no doubt that its use is established in the English language."