What it's like trying to survive without water in Jackson, Mississippi 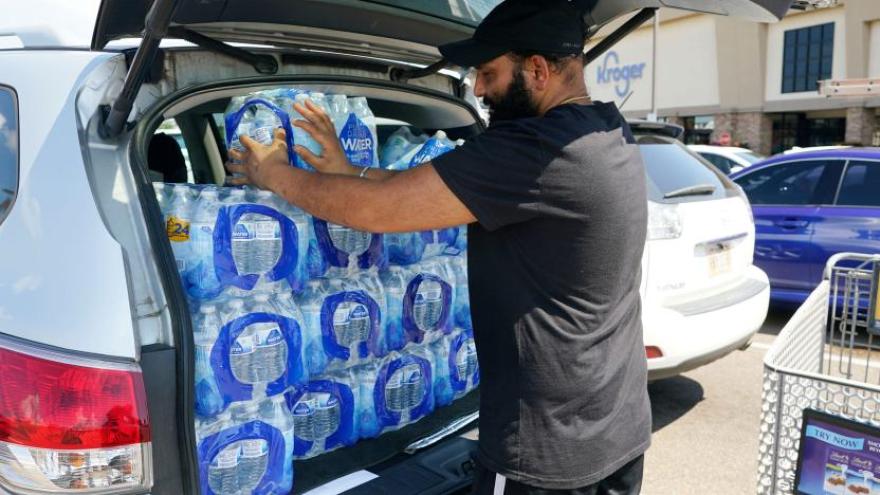 Rajwinder Singh, a business owner, pats into place the 15 cases of drinking water he purchased into his vehicle, on August 30 in Jackson, Mississippi. People in Jackson are coping with what happens when there's no water to drink, cook with, or bathe.

(CNN) -- Most people in the United States take it for granted that when you turn on a faucet, you get potable water.

People in Jackson, Mississippi, are now coping with what happens when there's no water to drink, cook with, bathe or even flush a toilet.

Mississippi's capital city has long had a water problem. But this summer, pumps at the main water treatment facility were damaged, and then last week, flooding of the Pearl River after heavy rains affected treatment processes, Jackson Mayor Chokwe Antar Lumumba said. Now there's not enough water pressure to serve some 180,000 people in the city.

"It's been a difficult situation for myself but also for the residents all over the City of Jackson," Mississippi State Rep. Ronnie Crudup Jr. told CNN's Alisyn Camerota. "There are over 180,000 residents who are suffering right now because of this water outage."

It's "more than an inconvenience," the mayor told CNN's Pamela Brown. "It's a disruption to life. How you schedule your day around having to go and pick up water," he said.

Here's a look at some of the extraordinary effects of living without running, potable water.

No water to flush toilets or brush teeth

People told CNN's Ryan Young that they have been catching rainwater to flush their toilets and even to brush their teeth with it. And some said they tried to bathe their children in the brown water that came out of their faucets.

Crudup, however, said that although there was no water Monday night, on Tuesday there was enough water to flush toilets, but the water is discolored and not safe to drink.

He and his family used bottled water Monday morning to brush their teeth.

No air conditioning in medical centers

Some of Jackson's University of Mississippi Medical Center facilities are experiencing issues as a result of the water crisis.

The Jackson Medical Mall air conditioning is not functioning properly "because the water pressure feeding its chillers is too low," UMMC said in a statement Tuesday. It reached a high of 91 degrees in the city Tuesday.

A water tanker was expected to arrive Tuesday afternoon to feed the system so that it is fully operational, the center said.

No water for firefighters

Water will be brought into the city in tankers and organized for fire safety and life safety as well as for sanitation, Reeves said.

Waiting for hours for a case of water

It was 91 degrees in Jackson on Tuesday when cars were lined up for more than a mile to get one case of 24 12-ounce bottles of water at one of the distribution sites. Some waited more than 2 and a half hours, only to reach the front of the line and be told that the water was all gone.

Eighty-six-year-old Jeraldine Watts was in a line that was two miles long, she told CNN.

Watts, who was born and raised in Jackson, is living at home with her daughter and granddaughter and said they have to use bottled or boiled water for everything -- to brush teeth, cook and wash dishes.

"If I had a bigger family, how long would one case last?" Watts asked.

"It's not OK," Jackson resident Lynn Jones told CNN. "You know, we need to do something about it because we do pay taxes and we expect that the system will work."

No classes, and businesses are closed

Jackson Public Schools and Jackson State University are holding virtual classes because they have no water.

Water conditions will be monitored on a day-to-day basis, and school officials will confer with city officials to determine when in-person learning can resume, the school district said in a statement Monday.

Numerous businesses were closed Tuesday with many going virtual, but some, including restaurants, are bringing in their own water trucks so that they can feed some of Jackson's residents, Crudup said.

The head football coach at Jackson State University said its football program is in "crisis mode."

"Water means we don't have air conditioning. Can't use toilets," Coach Deion Sanders said on Instagram. "We don't have water, therefore we don't have ice, which pretty much places a burden on the program. So right now we're operating in crisis mode."

The coach is trying to find a place for the team to continue practicing, he said.

"Find somewhere that can accommodate every darn thing that we need and desire to be, who we desire to be, and that's dominant," Sanders said.

Rosa Barron, the pastor of the AME Church in Jackson, is raising money to buy water with hopes of turning her church into a pickup location.

"I had a churchgoer tell me that she had to leave her apartment because her water was shut off," Barron said. "Another told me she spent hours filling up her bathtub so she can have enough water to flush the toilet."

Barron started preparing for a possible water crisis last week when the city warned residents that the river might crest, she said.

"The city of Jackson has already been without enough water pressure for almost 31 days. I just had a feeling there was going to come a breaking point," she said.

Last year, several Mississippi AME churches came together to raise money to buy water for their Jackson church after the city's pipes burst because of the cold weather, according to Barron.

Barron said she plans to raise money to buy water to make available for people to pick up at her church. She also plans to deliver water to locals who can't leave their homes, like the church did last year, she said.