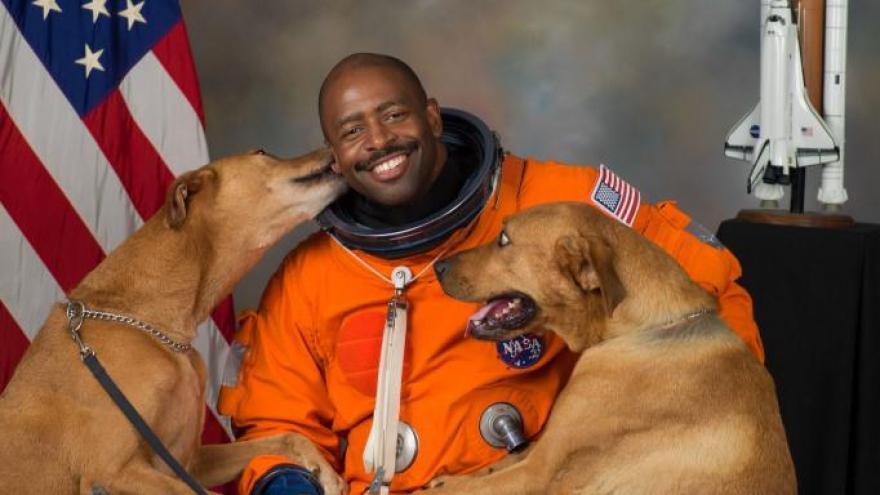 Leland Melvin's now-famous NASA portrait featuring his two rescue dogs, Jake and Scout, who he secretly smuggled into NASA for the photo shoot. Melvin flew two shuttle missions with NASA in 2008 and 2009.

(CNN) -- When NASA astronaut Leland Melvin was in fifth grade, he found his calling to be a scientist -- by blowing up his living room.

He calls it "the big kaboom."

Both of Melvin's parents were middle school teachers, and they were constantly encouraging and inspiring him to think outside of the box. His mother gave him a chemistry set that wasn't age-appropriate for a fifth grader and told Melvin to carefully read the instructions.

He tossed the instructions aside, mixed the chemicals together and set off an explosion that burned a hole in her carpet, leaving it singed and frayed. She was livid, but the spark had been lit for Melvin.

"I had just liberated fire and brimstone by taking these two clear chemicals and putting them together, and that led me to becoming a chemistry major in college," Melvin said.

That initial hands-on experience has remained with Melvin throughout his life, and it's something he recognizes as an important way to get kids involved in STEAM, or science, technology, engineering, art and mathematics, early on.

It's one of the reasons Melvin teaches classes geared at kids in kindergarten through eighth grade as part of Varsity Tutors' Space Club, which kicked off soon after the coronavirus pandemic began in March 2020.

Smaller sessions, called mission crews, that focus on areas of interest like the solar system, are also available for a fee.

At the beginning of the pandemic, the team behind the tutoring company realized they had capabilities for large classes and wanted to offer students a productive way to fill their time at home, said Brian Galvin, chief academic officer at Varsity Tutors. Melvin taught some of the first classes, sharing his experiences as an astronaut and the possibility of humans going to Mars.

He wore his flight suit as he talked kids through experiments and answered their questions -- including the ever popular query of how to go to the bathroom in space.

The kids in Melvin's classes began to join in by dressing up as astronauts and building "rocket racers," or little rockets made using household products and propelled by air.

The classes are designed to be interactive and fun, with a challenge or call to action kids can follow up on, and three or four memorable facts they'll want to share with friends and family, Galvin said.

"Space, dinosaurs and animals are some of the compelling STEM gateways for kids, so we lead with curiosity and open-ended questions to get them thinking," Galvin said.

Melvin was attracted to the idea of teaching these classes because they could be easily accessed by kids at home with an internet connection and computer or tablet, and students could learn from instructors with diverse voices and backgrounds.

"It's really about three things: access, opportunity and belief in themselves," Melvin said. "We have to make sure kids get it, because every ZIP code does not have access and we have Katherine Johnsons in the wings waiting to do great things, but don't have that access to those opportunities. The opportunities are there, and we just need to keep pumping in that inspiration."

Alyssa Carson will teach her class about the history of space travel on April 5. The 20-year-old wants to be the first person to go to Mars. She knew at 3 years old she wanted to travel to the red planet.

Carson has a multitude of experience under her belt for someone her age, having attended Space Camp seven times among other enriching experiences that have certified her to make her an astronaut trainee and go to space.

Her class focuses on both the history and future of human space travel, addressing the kids in her class as the "Mars Generation," since they will witness humans reach Mars the same way people witnessed Neil Armstrong's first steps on the moon in 1969.

It's an exciting time to think about space, Carson said. The return of humans to the moon in 2024 through NASA's Artemis program, and all of the focus on Mars, means that the kids focused on learning about space now will have "endless amounts of opportunities" to pursue their areas of interest in the future, she said.

"This is really just unchartered territory," Carson said. "For the first time ever in space, we're able to do more than one thing at a time in space. We can have astronauts living on the International Space Station, we can have NASA having plans of wanting to go to the moon and Mars. I want to encourage kids to pursue their dreams, discover different passions or maybe even spark a new one."

Subscribe to CNN's Wonder Theory newsletter: Sign up and explore the universe with weekly news on fascinating discoveries, scientific advancements and more.

For Space Club instructor Raquel Nuno, the fascination with space began when she was a little girl growing up in Portugal. Her birthday fell on the day when the Perseids meteor shower typically peaked. Nuno and her family would go to the beach and watch meteors streak across the sky.

Nuno was filled with questions about space, so her parents, who painted ceramics, would take her to the planetarium and the library. One of her prized possessions remains a book on amateur astronomy that Nuno's dad bought her when she was young.

Nuno and her family moved to the US when she was 11. Although she was interested in pursuing science, Nuno wasn't sure how to go about it. Her dad was diagnosed with terminal cancer, and Nuno wanted to help provide for him, so she went into the Air Force after high school.

After she left the Air Force, Nuno rediscovered the book her father gave her and she was reminded of her childhood dreams. Nuno began attending community college, focusing on science and math, and started an internship at NASA's Jet Propulsion Laboratory in Pasadena, California. She worked with scientists and engineers who were coming up with mission concepts to answer questions about our solar system, as well as the types of instruments needed on spacecraft to help find those answers.

"It was at JPL that I discovered this field of planetary science," Nuno said. "I didn't even know planetary geology was a thing. And I figured out this is exactly what I want to do: answering science questions."

Nuno pursued an undergraduate degree in geophysics and space physics, and this year she's finishing up her doctorate at the University of Californa, Los Angeles. She also works on an instrument on the Lunar Reconnaissance Orbiter, which has been circling the moon since 2009.

Her expertise is in impact craters, so when she teaches classes, she has kids do meteor impact experiments, like dropping different size objects in sand to see the craters they create.

Their excitement inspires Nuno to be more curious and to be unafraid to ask questions in her own work.

"They haven't lost their natural curiosity and wonder about the world," she said.

When Nuno pictured a scientist as she was growing up, she thought of Bill Nye or Albert Einstein.

"But I didn't know what it actually meant to be a scientist," Nuno said. "I really want to show kids that you don't have to look a certain way or act a certain way. If you have curiosity and if you want to do it, you can do it."

Nuno acknowledges that she wasn't sure she would be good at science, and that fear almost stopped her from pursuing STEM. Her advice to kids is to give it a try, especially if they're passionate about it.

"There's so many questions left to answer and we need all kinds of people to come and help answer at different viewpoints," Nuno said. "That's how we are going to discover the cosmos. Thousands of people make a mission work, and there's a place for everyone."