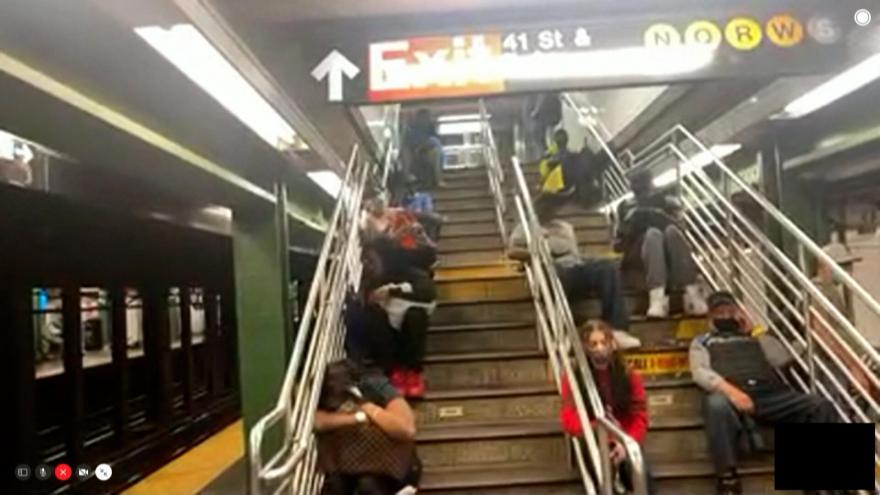 Many commuters became stranded at travel hubs far from home during the New York floods on Wednesday night.

(CNN) -- Camilla Akbari boarded a 7:43 p.m. New Jersey Transit train on Wednesday night from New York Penn Station hoping to get to her mom's place in Princeton, New Jersey. It's a trip that generally takes about an hour.

Amid torrential downpours and flooding, the 24-year-old New York University Law School student found herself stuck overnight on-board the train without electricity, ventilation, food or water. The toilets were unusable. Through the night she says she heard a stream of false promises that help was on the way.

"We were literally and figuratively in the dark for hours," she told CNN.

Akbari was one of thousands of people stranded in the New York metro area's public transit systems on Wednesday night due to flash floods from the remnants of Hurricane Ida. No mode of transportation was spared. Streets, subways, above-ground trains and airports were all flooded by the storm.

New York declared a state of emergency early Thursday morning, the first-ever flash flood emergency issued for the city. And the city implemented a travel ban until 5 a.m. ET. Those declarations came too late for many commuters, though, who became stranded at travel hubs far from home.

The Metropolitan Transportation Authority outlined the issues early Thursday: The subway system flooded in 46 locations, about 65 buses were blocked or stuck and two Metro North Line trains were stranded. In addition, all New Jersey Transit rail service, except for the Atlantic City Rail Line, were suspended due to the flooding.

The New York City Fire Department had to rescue hundreds of people from subway stations, spokesman Frank Dwyer said. The head of the MTA said roughly 15 to 20 subway trains were stranded.

"The most important thing is we did get people out safely," MTA Acting Chair and CEO Janno Lieber said.

"We literally through the night had transit workers going through the tracks to make sure that they were safe," she said. "There was a lot of flooding. No lives were lost there."

NJ Transit said about 200 passengers were on board Train 3881, which left New York at 7:43 p.m. headed for Trenton. The train became disabled at about 8:30 p.m. due to exceedingly high flood waters on the tracks east of Newark International Airport, NJ Transit spokeswoman Mariluz Garcia-Diaz said.

Akbari, Ian Wolsten, Ilia Rivera and Alexandra Patino were among those passengers on board and described a harrowing journey made more frustrating by a lack of information.

A couple stops into the trip, the train stopped on the tracks as the rain poured down and the flooding began. Passengers were told there was a mechanical issue with the train and that a rescue train was on its way. But hours went by without more information. So they sat.

Rivera, a 30-year-old who works in fashion, said the water levels were rising up to near the train's window.

"I'm sitting literally right next to the window, and I see the water at my level almost," she said. "I'm like, 'Am I going to have to swim out of here?'"

Three cars at one end of the train had a few inches of water, so passengers were moved to other cars not impacted, Garcia-Diaz said.

Several hours of waiting later, the electricity went out -- no lights, no air-conditioning and no ventilation, and no windows or doors open due to the pounding rain. The passengers eventually recognized they'd be stuck for the night and tried to go to sleep.

Wolsten, a 27-year-old commuter headed to his home in East Brunswick, New Jersey, said passengers were initially having fun with the situation.

"But very quickly it turned dark," he said. "Once the power was cut off from the trains, it was absolutely helpless. It's one thing for it to be pitch black in there, because we're sleeping anyway, but there was no air conditioning and no ventilation, so you think with Covid, it's like, 'What the hell is going to happen if the air is not going anywhere?' It just turned concerning very quickly."

Patino, a 30-year-old traveling from Queens to see her boyfriend in Edison, New Jersey, said she was frustrated by the lack of information from train conductors.

"The updates were just so terrible, and no one was really letting us know what was happening," she said.

The rain eventually stopped, but the train's doors and windows remained mostly closed. By the early morning, people had become agitated. Akbari said she saw people's face-masks come down, smelled cigarette and weed smoke, watched a woman on the verge of a panic attack. Still, there was no reliable information on when they'd be able to get moving again.

Garcia-Diaz, the NJ Transit spokeswoman, said emergency responders and Newark Fire Department personnel were at the site with two high water rescue vehicles, but they ultimately decided passengers and crew would be safer on the train. Nobody was injured.

"The decision to keep the customers on the train was the safest choice as the train cars were sufficiently elevated above the flood waters," she said in an email.

At around 4 a.m., Transit police arrived with water bottles and opened the doors for fresh air.

"I think I started to panic quite a bit," Akbari said. "By the time I got to the door that had been opened by the Transit authorities, I could tell I was shaking a little bit, there were tears in my eyes, just because I was so overwhelmed by the situation. So it was definitely frightening," she said.

A rescue train finally arrived about an hour later and towed the non-functioning train to Newark Airport station. There, the passengers were told to get off and wait at the platform for a working train.

At the end of it all, the passengers told CNN they made it home safely.

Patino took that next train to Edison and made it to her boyfriend's place around 7 a.m. Rivera took rode on to Elizabeth and made it home close to 7 a.m. Wolsten took the train to the Metro Park stop and got home at about 6:45 a.m.

Akbari took the train to Trenton, arriving there at 7:30 a.m. -- nearly 12 hours from her departure time. Her mom then picked her up in a car, and it took another two hours to get home to Princeton as they navigated closed and flooded streets.

"It definitely was an adventure," Akbari said. "I think it's a little bit easier to look back on it now than the situation as it was unfolding."

Stranded at the subway station

CNN's Shimon Prokupecz stayed overnight at the Times Square subway station in Manhattan, joining dozens of people stranded by the non-functioning system. A 1 train sat in the station since 9:45 p.m., and it took until just after 7 a.m. for it to move just one stop, he said.

"There's no way for many of these people to get home. The subways are their life. This is the way they get home," Prokupecz said.

Many of the people stranded were coming from work and hoping to get to their homes in Brooklyn, he added.

Beverly Pryce was one of those stranded by the flooding.

She said she left her Queens home Wednesday night to try to get to work as a nurse. She took an Uber cab to a bus station. But there were no buses running because of the flooding, she said, so she was stuck at the station. She got on a different bus to try another path to work, but that path was also blocked by flooded streets, she said.

Next, she hopped on the 7 train and took it to Times Square station, arriving at about 11:30 p.m. -- and found herself stuck there overnight. There were no buses or trains to go anywhere. She said she's lived in New York for 30 years, and "I've never seen nothing like this."

"I didn't expect it to be this severe," she said. "I would not leave my house."

Robert Hedglin left work in Manhattan around 9 p.m. and got on the subway headed for his Queens home. But his train became stuck underground for over an hour between two station stops. Once the train made it to the next stop, the rest of its journey was canceled, he told CNN.

"I'm exhausted, frustrated, but at least I got home safe," he said. "Some others were not as lucky."