What is the Supreme Court and why does it have so much power? 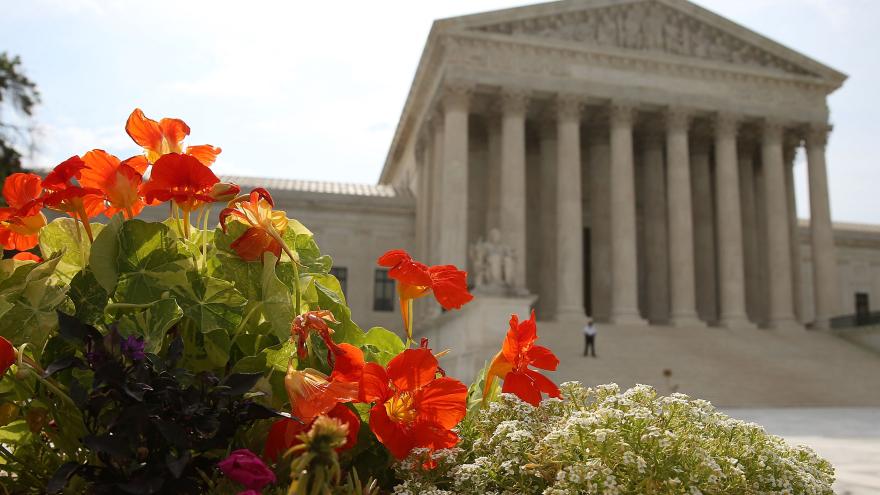 Editor's note: A previous version of this story appeared on March 26, 2012.

(CNN) -- With recent decisions on abortion, gun control, religious freedom and the environment, the US Supreme Court once again reasserted its central role in America.

The nine justices are unelected, serve for life and until recently were all White men. But their actions have helped define the American way of life for more than two centuries.

Here are several common questions about the court, its makeup and its power:

What does the Supreme Court do?

In essence, the court decides if laws and government actions are constitutional and outlines the breadth and limits of government.

When a case reaches the Supreme Court, typically through a process of several years, it's important because the precedent the majority opinion sets is then the standard by which future laws are measured. That's due to the principle of "stare decisis," Latin for "to stand by a decision," where a current court should be bound by previous rulings.

Yes, in the sense that they can't be overturned by another body.

But no, in the sense that the court can overturn or change its own precedent over time, as it did with odious decisions allowing racial segregation or with last month's reversal of the 1973 decision in Roe v. Wade, which had guarantee the constitutional right to obtain an abortion.

Not directly, but Congress can pass laws that respond to rulings.

For instance, the court ruled in 2007 that Lilly Ledbetter had not filed an equal pay discrimination complaint within the allowed time period (because she had not discovered the discrepancy until years later). President Barack Obama signed a law in 2009 that eliminated those previous restrictions.

What about amending the Constitution?

No. They're appointed by the president, and then sent to the Senate to be confirmed.

How many justices are there and who appointed them?

Nine. Each has an equal vote.

Why do some presidents get to appoint more than others?

Luck and politics. Presidents Bill Clinton, George W. Bush and Obama each served for eight years and got two justices confirmed each.

Trump served one term and appointed three: one because Obama's final nominee in 2016 was blocked by Republicans, one due to a retirement and one, just before the 2020 presidential election, due to the death of liberal Justice Ruth Bader Ginsburg.

Are there any requirements to be a justice?

No. It's most common for nominees to now have strong legal pedigrees (Ivy League law school, experience clerking for previous justices or experience on federal appeals courts) but none of that is required.

Kagan was a Harvard Law professor and solicitor general (a top Justice Department attorney) but was never a judge. The late Chief Justice Earl Warren had been the governor of California.

Yes, as are the judges for other federal courts, and they can serve until death or retirement. It means they're in theory insulated from the whims of the political branches. But it doesn't make the justices popular: Current polls show that fewer than one-third of Americans have confidence in the court.

Can Supreme Court justices be removed?

Yes, via impeachment -- the same process used to remove a US president. The House would vote to impeach, and the Senate would have a trial and vote on whether to remove the justice. It's never happened for a Supreme Court justice, however.

What is 'court packing'?

The Constitution doesn't say how many justices the court must have, but the number has been set at nine since the mid-19th century and codified into law since. In theory, the president can nominate and the Senate can confirm more justices to swing the court in a desired direction.

President Franklin Delano Roosevelt suggested this in the 1930s after the court had struck down many of his "New Deal" policies. Recently faced with a court that has six conservatives and three liberals, Democratic politicians have suggested adding several more justices to tilt the balance of power.

How does the court work?

The Supreme Court first met in 1790, as the highest court in the judicial branch of government. The justices are led by the chief justice of the United States (that's the official title). The court has occupied its current building in Washington only since 1935. Previously, it borrowed space in Senate chambers in the US Capitol.

Traditionally, each term begins the first Monday in October, and final opinions are usually issued by late June. Justices divide their time between "sittings," where they hear cases and issue decisions, and "recesses," where they meet in private to write their decisions and consider other business before the court.

In the courtroom, justices are seated by seniority, with the chief justice in the middle and the junior-most justices on the outside. Before public arguments and private conferences, where decisions are discussed, the nine members all shake hands as a show of harmony of purpose.

As the gavel sounds and the justices are seated, the marshal shouts the traditional welcome, which reads: "Oyez! Oyez! Oyez! All persons having business before the honorable, the Supreme Court of the United States, are admonished to draw near and give their attention, for the court is now sitting. God save the United States and this honorable court."

Since most cases involve appellate review of decisions by other courts, there are no juries or witnesses, just lawyers from both sides addressing the bench. The arguments usually last about an hour, and lawyers from both sides very often have their prepared oral briefs interrupted by pointed questions from justices.In recent years, the court has given each justice five minutes to ask questions, going in order from the chief justice to the most junior.

This give-and-take, question-and-answer repartee requires lawyers to think concisely and logically on their feet. And the tone of the questioning often gives insight into a justice's thinking, a barometer of his/her decision-making.

After the arguments, conferences are scheduled, where justices discuss and vote on the cases. In these closed-door sessions, the nine members are alone. No clerks or staff are allowed. No transcripts are kept.

Justices spend much of their time reviewing the cases and writing opinions. And they must decide which cases they will hear in open court. When asked just before her 2006 retirement what the jurists do most of the time, Justice Sandra Day O'Connor said bluntly, "We read. We read on average 1,500 pages a day. We read. Sometimes we write." Added Justice Antonin Scalia: "We try to squeeze in a little time for thinking."

Cameras are not allowed, and until the Covid-19 pandemic, live audio for oral arguments wasn't available either, meaning that the actions of nine men and women that can impact every aspect of American life happen in the shadows.