What is going on in Iowa? Local officials raise concerns about vote reporting 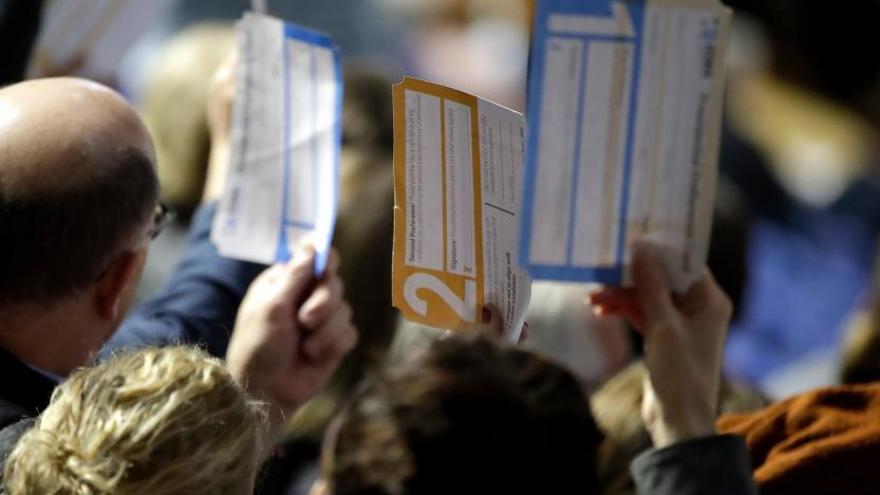 Caucus goers seated in the section for Democratic presidential candidate former Vice President Joe Biden hold up their first votes as they are counted at the Knapp Center on the Drake University campus in Des Moines, Iowa, Monday, Feb. 3, 2020.

(CNN) -- The first results of the 2020 presidential election are delayed, with zero precincts reporting in the Iowa caucuses amid complaints about long hold times for precincts looking to send in results and rising questions about a new app used by the state Democratic Party.

Linda Nelson, the caucus chair of her precinct in Council Bluffs, was among the first to publicly sound the alarm Monday afternoon about concerns with the app used to count Iowa caucuses results.

Nelson said Monday she kept getting an error message when she entered her PIN on the app. She said she planned to do it the old fashioned way, by calling in her results.

That turned out to be impossible, as the phone lines were jammed. She texted a picture of her Caucus Math Sheet to Troy Price, chairman of the Iowa Democratic Party, and went to bed.

Nelson said the Iowa Democratic Party called her just before 1:30 a.m. CT on Tuesday morning, when she was asleep.

"I had to go out to my car, retrieve my materials and shared w/ them totals after both alignments and delegate distribution. They are probably still making calls," Nelson texted CNN.

A senior Democratic official tells CNN they estimate that about 250 precincts are still outstanding.

The software issues were the start of a cascading series of problems -- including difficulties getting through on the phone to report results after precinct officials had trouble with the app -- that led the Iowa Democratic Party to hold off on releasing results on Monday night.

Hours after caucusing began Monday, Shawn Sebastian, a precinct secretary in Story County, told CNN's Wolf Blitzer, "I have been on hold for over an hour with the Iowa Democratic Party. They tried to, I think, promote an app to report the results. The app by all accounts just like doesn't work, so we've been recommended to call into the hot line, and the hot line has not been responsive."

Sebastian's call was picked up as he was speaking on-air to Blitzer, but moments later Sebastian said he was hung up on.

Drew Kelley, a vice chair of the Clinton County Democratic Central Committee, told CNN, "I can't tell you anything about the why, just that I had a busy signal for about 15 minutes, then finally got through and was on hold another hour. Finally through, the worker on the line was extremely helpful."

Iowa Democratic Party officials hunkered down Monday night in their war room, initially leaving campaigns in the dark over the delay in the reporting of caucus results.

An Iowa Democratic official said results were still being collected overnight. There was no estimated time given to campaigns.

"They literally have no verified results," a senior campaign adviser said late Monday. "We won't know anything until some time Tuesday — at least."

Price released a statement explaining the inconsistencies in the reports: "Because of the required paper documentation, we have been able to verify that the data recorded in the app and used to calculate State Delegate Equivalents is valid and accurate. Precinct level results are still being reported to the IDP. While our plan is to release results as soon as possible today, our ultimate goal is to ensure that the integrity and accuracy of the process continues to be upheld."

Officials from two Democratic campaigns tell CNN they were told the app to tabulate results had crashed. They said they had not been given any other information.

Representatives of presidential campaigns were not invited into the state party's war room, which is standard practice. But as the night wore on without word, one said: "It's clear that something has gone wrong."

A state Democratic official who was in the war room said the mood was calm and the officials were committed to get the count right.

Iowa Democratic Party Communications Director Mandy McClure said in a statement late Monday that there were no issues about the integrity of the vote despite the delays.

"We found inconsistencies in the reporting of three sets of results," she said.

"In addition to the tech systems being used to tabulate results, we are also using photos of results and a paper trail to validate that all results match and ensure that we have confidence and accuracy in the numbers we report," the statement reads.

"This is simply a reporting issue, the app did not go down and this is not a hack or an intrusion. The underlying data and paper trail is sound and will simply take time to further report the results," the statement reads.

According to former Iowa Democratic Party chair Andy McGuire, the state campaign chair for Sen. Amy Klobuchar, precinct captains were given a six-digit pin that they put in that identifies the precinct captain and allows them to put in the results.

She added: "Between there and headquarters, something's going on."

But, she said, "The good news here is all this is solidified and backed by paper. We had to sign our results. It's all on paper."

Iowa Democrats planned to release more information about caucus results than usual this year. The three sets of numbers expected are the state delegates won, the first alignment, and the second alignment.

Voting issues aren't new when it comes to the Iowa caucuses, the state in the last Presidential election in 2016 faced a controversy surrounding apparent confusion about the voting process.

Unlike a traditional primary, in which voters cast ballots, caucuses all take place out in the open: People show up to their precinct and physically move into designated parts of a room to show their preference for a certain candidate. Delegates are awarded based on those who reach a certain threshold of support by the end of the night.

In 2016, the state Democratic Party was forced to review the caucuses after the campaigns of Hillary Clinton and Bernie Sanders flagged issues with the process specifically the way in which a winner is declared and coin flips.

The winner of the caucuses is decided by state delegate equivalents, tied to a math formula, not head counts. While, the coin flips or "games of chance" are used in rare circumstances at precinct caucuses to adjudicate ties or resolve issues created by rounding errors. At stake at these precinct-level coin flips is the one remaining slot in that precinct for a campaign to send a delegate to attend that precinct's county convention. Coin flips are not used to decide which candidate wins a state convention delegate or national convention delegate.

The 2020 caucuses proceeded under new rules and procedures, including the addition of 87 "satellite caucuses" sites part of the state's effort make the process more accessible.