What happens if Brian Laundrie isn't found in the coming weeks 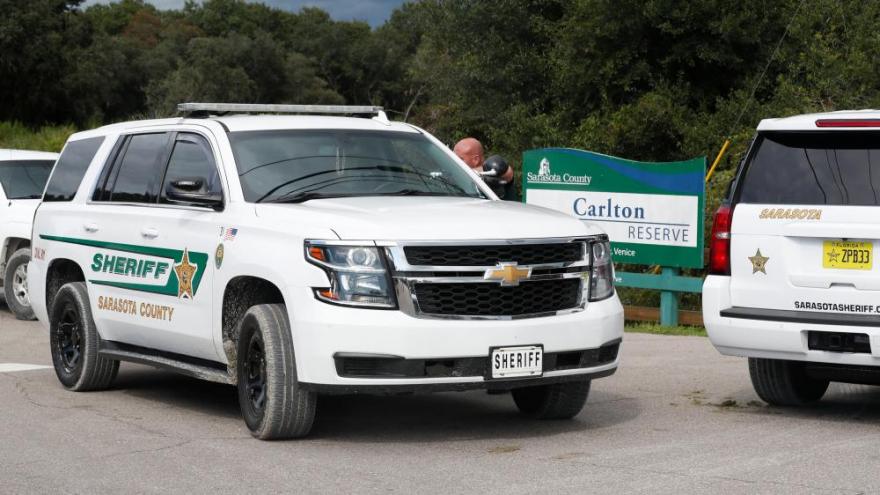 Local and federal investigators have been searching for Brian Laundrie -- the fiancé of 22-year-old Gabby Petito -- for about a month in a Florida nature reserve that spans nearly 25,000 acres.

(CNN) -- Local and federal investigators have been searching for Brian Laundrie -- the fiancé of 22-year-old Gabby Petito -- for about a month in a Florida nature reserve that spans nearly 25,000 acres.

Petito's remains were discovered in Wyoming on September 19. The Teton County coroner determined her cause of death was strangulation. Authorities have not connected Laundrie to Petito's killing, but he is the subject of a federal arrest warrant for events following her death.

So far, investigators have found no sign of him in the vast reserve they've been combing through. Last week, North Port police spokesperson Josh Taylor said there had been "nothing to suggest" whether Laundrie was alive or not. Police also said no one has seen Laundrie in the reserve, adding that the search was prompted by information from Laundrie's parents, who said he went there. Taylor said search teams have not found any physical evidence of Laundrie there but plan to continue the search until they have better information.

How the search unfolds from here largely depends on how many more tips investigators continue to get and how many resources they're able to allocate, experts who are not connected to the investigation told CNN.

What we know about the search

Investigators kicked off the search in the Carlton Reserve after speaking with Laundrie's parents on September 17, recruiting dozens of officers, drones and swamp buggies.

On Thursday, a human remains detection K-9 unit from the Pasco County Sheriff's Office was deployed to assist North Port police and the FBI in their search for Laundrie. These K-9s have assisted the search for Laundrie in the reserve several times in the past month, according to Amanda Hunter, a spokesperson for the sheriff's office.

CNN reached out to North Port police for more details on the search.

"We will not be providing daily updates and details on the search. If and when something of substance is found, we will be a part of that conversation at that time," Taylor said.

The FBI did not comment on CNN's questions about the search.

They could be searching the reserve for weeks

While a month may seem like a long time, an active, physical search for Laundrie could carry on for weeks if more information continues to come in, according to Paul Belli, a retired lieutenant of the Sacramento County Sheriff's Office and president of the International Homicide Investigators Association.

In searches like this, investigators may start by focusing on sections of the reserve they believe that Laundrie could most likely be in, followed by areas they believe are second and third most probable for him to be in, Belli said.

"I certainly think that if you actually had the resources to do a very thorough search of 25,000 acres, I would guess that's many months," he said.

Those initial areas of focus would likely include the dry areas, as parts of the reserve tend to be swamp-like, according to Chris Boyer, executive director for the nonprofit National Association for Search and Rescue. Other areas of focus could include places that are away from hiking paths or trails, in case Laundrie wanted to evade authorities and avoid being found.

And then, perhaps, authorities may conduct "grid searches," Boyer said, although those require a lot of resources, including a large number of personnel walking closely together to thoroughly search though a specific area.

"That (search) happens when you don't have any other clues to go on," Boyer added. "You've looked at this person's behavior, you've tried to profile their skill set and what they may have available to them in the way of resources, and you've tried to look at the most probable places they would be based on that."

A big part of how investigators search and what areas they focus on usually has to do with the kinds of tips they're receiving. At this point in the investigation, many tips are still likely coming in, Belli said.

"I'm sure they're getting many, many tips. So continuing the search, it seems perfectly appropriate to me, even though it has been a while," he said. "In (2006) we had the murder of one of our police officers and there were over 6,500 tips in that particular case over the years, and a good 4,000 of those came in the very beginning months of that investigation."

A transition into a less active search

Once authorities have no reason to believe Laundrie is still in the reserve and the number of tips coming in dwindles, they may have to pull some of those search resources and focus on other parts of the investigation, Belli said. But that could be weeks or months away.

"If you only have so much available to you, there is a point where you have to make that tough decision ... and actually look at that objectively and say, 'We've done what we can currently, let's move into another mode,'" he said. "There just comes a point where you just don't have the manpower and resources to continue that type of a search."

At that point, Boyer said, investigators may go back through all the clues in the case and reassess what led them to the reserve, as well as focus on Laundrie's electronic footprints -- something they're likely already doing.

A source close to the Laundrie family told CNN last month that Laundrie left home without his wallet and without a cell phone he had purchased earlier in September.

CNN has also confirmed police do not have the phone Laundrie had with him during the couple's trip, nor Petito's phone.

Laundrie family attorney Steven Bertolino told CNN earlier this month that Laundrie's parents now believe he left home to go hiking on September 13 -- a day earlier than they initially reported to police. That could mean investigators may have to go back through all the places they suspect Laundrie could have been spotted and ask for footage from a day earlier, according to Boyer.

"You look at this and you go back to the day that he actually was reported missing and you go, 'Okay, even if the guy was only walking at three miles an hour, and he only walked eight hours a day, that's 24 miles a day that he could go in any one direction, times X number of days,'" Boyer said. "He could have walked out of the state of Florida, probably. If he was in a car, driving at 35 or 40 or 60 miles an hour, he could be anywhere in the United States."

Aside from the active physical search, authorities in a case like this would also want to get Laundrie's information on the global network Crime Stoppers or an FBI most wanted list, or put information about the search in billboards in certain areas, Belli said. His information could also be entered into the National Crime Information Center, which could help police officers identify him if Laundrie encounters the police, Belli added.

"There's a lot of technology resources that they may be able to leverage," Belli said. "Quite frankly, it's just having the information out there because when people call in, 'Hey, I saw him,' those are all tips you're going to be investigating."

Both experts agreed the media attention the case has received could play a significant role in helping to locate Laundrie if he's in the US and evading authorities.

"Every person that sees the newscast or reads about this becomes an unknowing searcher," Boyer said. "They will at least subconsciously have some knowledge about what's going on and if they see something that looks out of place or pings that memory of what's going on here, they might call 911."

Added Belli: "They've made it very difficult for him to just be out, walking around."

Years away from the case going cold

But even if Laundrie isn't found any time soon, experts told CNN that the case is likely years away from going cold.

"As far as this being a cold case... it's a department by department definition, but across the board, typically people will accept three to five years with absolutely no new leads, no new evidence, no new nothing (until it goes cold), and that is so far from where we are," said Sheryl McCollum, director of the nonprofit Cold Case Investigative Research Institute. "That's not the case here at all."

"Local departments, where they may believe there's been a sighting, they will typically for years have that person at the forefront of their minds," McCollum added.

While active search efforts may not look the same in the coming months or years if Laundrie isn't found, there will likely be investigators assigned to the case that will continue to work on it, according to Belli.