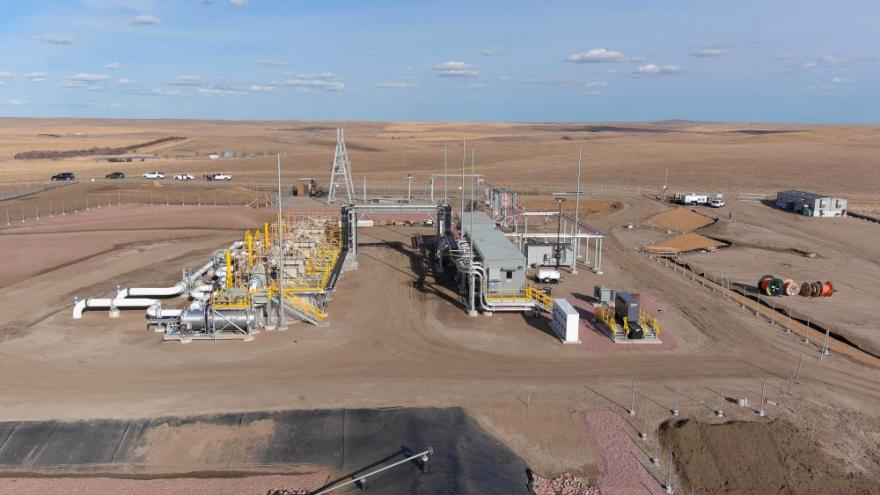 One of two energy substations near Murdo, South Dakota, meant to power oil pumps down the Keystone XL Pipeline. Both sit nearly completed and unused.

(CNN) -- Small town America had big dreams in the shape of the Keystone XL Pipeline.

After a decade of stop-and-go progress, the project spearheaded by Canadian energy giant TC Energy seemed tangible for residents of central South Dakota.

Along I-90, small towns lie dormant waiting for warmer weather and a return of tourism to kick into high gear. Visitors headed for Mount Rushmore provide an economic lifeline for these small communities. And the pipeline had begun to emerge as another revenue stream that would keep towns afloat year round.

"When TransCanada came along, we were, from a business standpoint, very excited. Because it's growth, it's opportunities," said Jeff Birkeland, a lifelong Murdo, South Dakota, resident and CEO of West Central Electric Cooperative.

Birkeland laments the missed opportunities the pipeline could have brought to the region. He had invested over a decade of his professional life on the project.

Those dreams died on January 20, when President Joe Biden signed an executive order that revoked the building permit for the 1,200-mile project that would have passed though Montana, South Dakota and Nebraska.

"That was one of the things he ran on," Birkeland said. "So I can't say it was a big shock. But when you finally hear it, it's a reality check for you. Thirteen years of my career have been spent on Trans Canada. It's tough."

In the last 30 years, West Central Electric has gained 99 new households in its five-county service area. Economic life in Murdo, with a population of 444, had become stagnant.

Building two substations providing power to two pumping stations along the pipeline would have been an irrefutable growth opportunity, bringing in close to a $1 million monthly, according to Birkeland. That growth would have trickled down to their 3,700 co-op members across the region in the form of a $325 annual credit, effectively reducing their power bills.

For now, both substations lie nearly completed and abandoned.

Birkeland also calculates the Murdo schools, with less than 200 students, missed out on tens of thousands of tax dollars that could have trickled down.

It all changed overnight

Within hours of President Biden's executive order halting the pipeline, dozens of workers and their families left the small towns in central South Dakota and got on the road looking for a way to provide for their families, according to Tricia Burns, a rancher and owner of Ignite Wellness Center in Philip, South Dakota.

"There was a real sense of urgency and a real sense of fear and anxiety," Burns said. "They need to get a move on and try and find something before all the jobs were taken. Most of them packed up and headed out. Some of them even left their stuff behind and said, 'when we figure out where their next move is, we'll come back and get the stuff.'"

That was nearly two months ago, but Burns remembers it vividly. She lost nearly half of her members within hours, losing out on almost $3,000 dollars a month. Two contracts with security companies evaporated, she said.

Burns had also grown close to the workers and their families that had migrated into their community to help build the pipeline. One of her gym employees was among those who were forced to leave.

"Everything had been signed, sealed, delivered. The game rules were set. Everybody was playing fair," Burns said. "This was going to be their home for four years, their daughter was going to get to graduate from high school here. And that was all taken away in an instant."

Philip, South Dakota, located 15 miles north of the main east-west interstate, has a population of 779. Their main street is comprised of nearly a dozen small business, all kept alive by mutual support throughout the community.

Brittany Smith, Philips' city manager, describes her hometown as "resilient." But the halting of the pipeline has affected them, nonetheless.

"We don't see a lot of growth. But we do see some," Smith said. "And so this looked like an opportunity for the locals to benefit as well as the city and the county to benefit."

TC Energy had awarded nearly $60,000 in grants to Philip while the project was ongoing. The money helped pay for a new pumper truck for the volunteer fire department. The grant also helped support youth sports and pay for a new sidewalk near the school.

"Philip is just a small community. But we are just one little bit of the whole entire project. What happens when another big project like this comes through and there's all this money invested into this and all these jobs that people are basically promised and then the President can just sign an executive order and shut it all down?" Smith said.

Bart Ramsey, a Philip rancher, told CNN that the project seemed like a long shot nearly a decade ago. But in the last five years it had made significant strides. Ranchers, he said, were approached about putting easements in place in exchange for a monetary compensation. The easements would have allowed TC Energy to run the pipeline through owned land.

"It's hard for us rural people to fathom something that big happening and as many dollars as it was," Ramsey said.

Ramsey supported the project but remained cautiously optimistic as time went by and the progress was slow. For him, the pipeline meant energy independence for the country.

"At some point, we may not need fossil fuels, we can get by without it. We're not there. All the planes, trains and automobiles that run almost all use fossil fuels. And if this was going to help keep that cost down for production of products and travel and everything else, that's a lot of dollars in the United States that would have been saved," Ramsey said.

Just one mile north of Philip, a TC Energy work camp lies empty. Another 30 miles north, a massive pipe yard is visible from a main highway with hundreds of pipes in display.

TC Energy declined to comment on the fate of the existing infrastructure already in place for the long-awaited pipeline.

"My fear is that they've invested all of these money and resources into what is already in place. And then they'll have to come tear it out," Smith said.