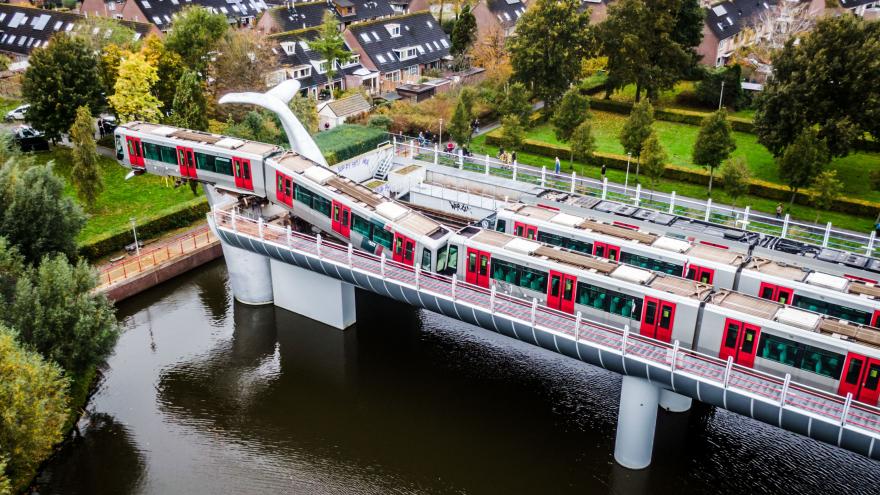 (CNN) -- A subway train in the Netherlands was saved from a spectacular crash when it burst through buffers and landed on an artwork in the shape of a whale tail.

The train "shot through on approach" to De Akkers station around 12.30 a.m. local time, RET, the transport operator in the city of Rotterdam, said in a statement Monday.

"To our relief, the metro operator got out of the vehicle unharmed. He is doing well under the circumstances. There were no passengers present," the company said.

An investigation is underway and RET is discussing how best to salvage the train, the company said.

The train burst through the buffers at the station, which is at the southernmost end of the Rotterdam metro system, and would have crashed more than 30 feet to the ground had it not landed on one of two whale tails installed by architect Maarten Struijs almost 20 years ago.

"I was surprised, I didn't expect this. Buffers are always strong enough," Struijs told CNN. "So, I am looking forward to the results of the investigation of this crash."

He explained that trains drop off passengers at the station before continuing to a parking area, which is where the incident occurred.

The tracks were built on a viaduct in an existing park, and local people asked for the whale tails to be installed as compensation for the loss of space in the park, Struijs said. 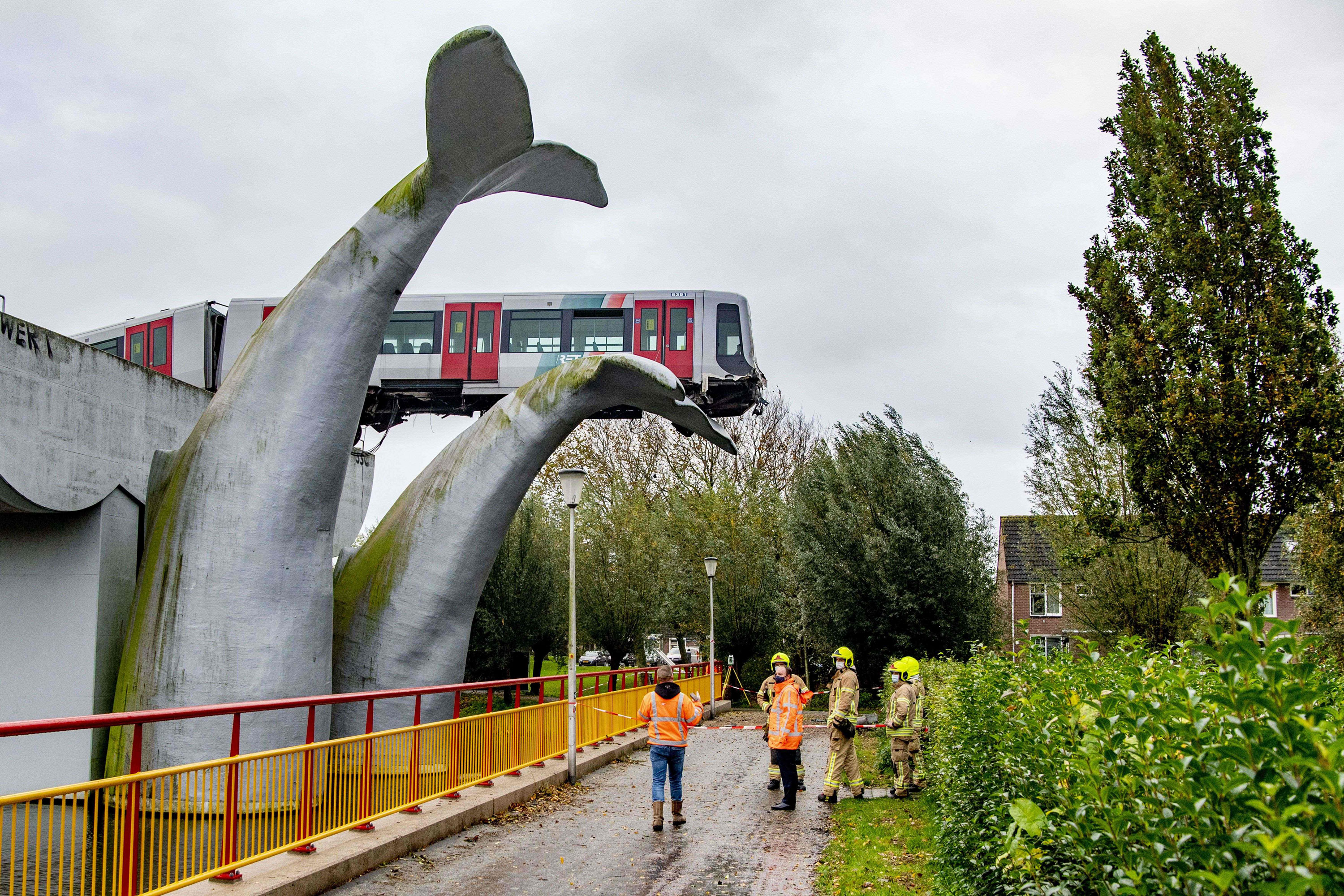 "I'll make sure to get a few photos. Because now it is at its best, and it will look worse when they prop it up," he told Dutch national broadcaster NOS.

"I could never have imagined it."

Struijs said he thought the tail, which is made of plastic, would have been damaged in the accident, "but that's apparently not the case."

Ruud Natrop, communications adviser for the Rotterdam-Rijnmond regional safety authority, told CNN the train is balancing 10 meters (33 feet) off the ground in the park by a pond.

"It is very difficult to place heavy cranes at this location," said Natrop, who added that security services are monitoring the situation but no one knows how long a salvage operation will take.

Carly Gorter, a spokeswoman for the authority, told CNN that the first step is to stabilize the train so it doesn't fall from its new perch on the artwork, which is named "Saved by the Whale's Tail."

"Yeah, it's dangerous. At the moment it's stable so that's good, but it's a risk," said Gorter. "If the wind is blowing very hard, that's a risk." 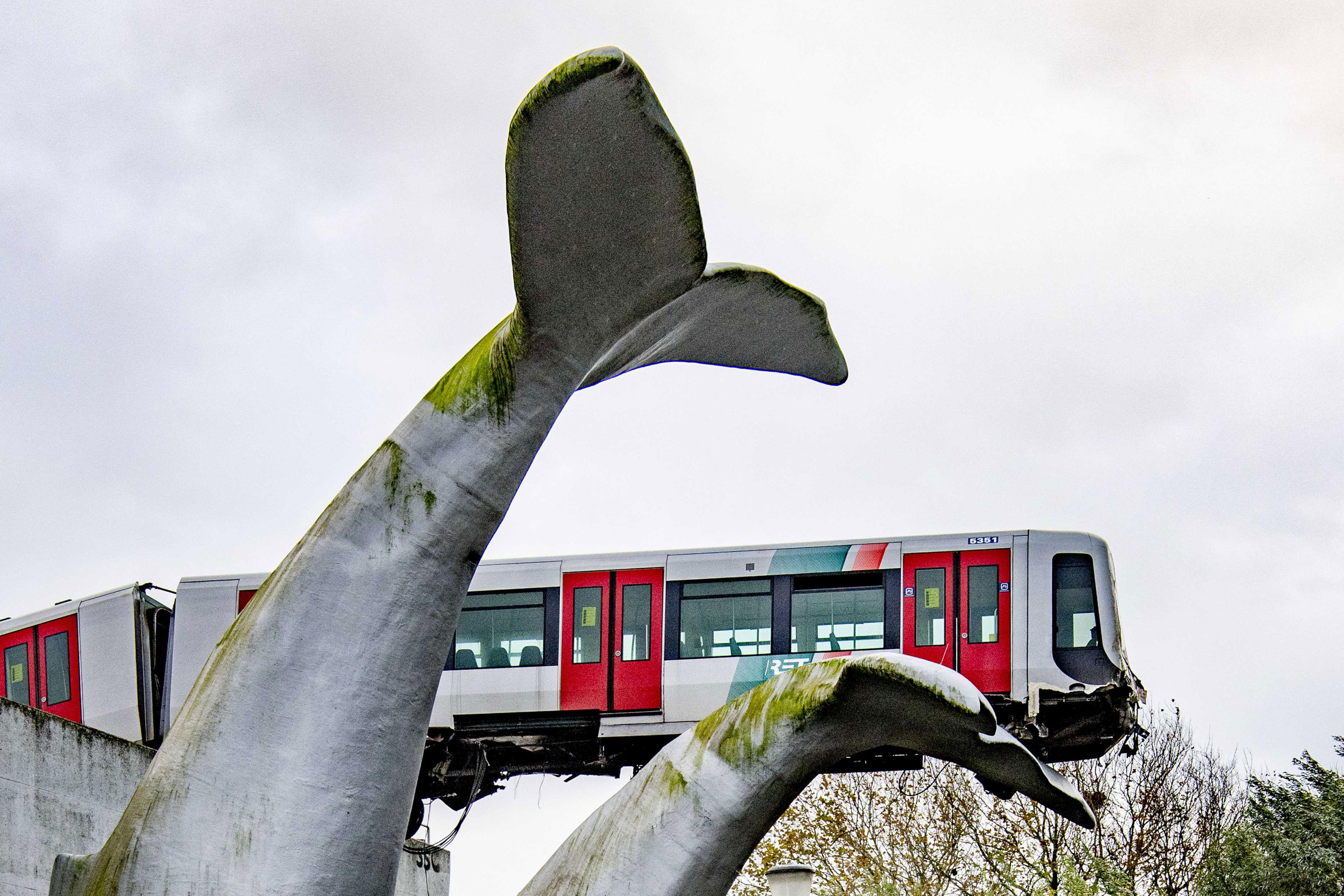