'We've been here before': Ohio bridge serves as a reminder of political hurdle Biden faces as infrastructure negotiations begin 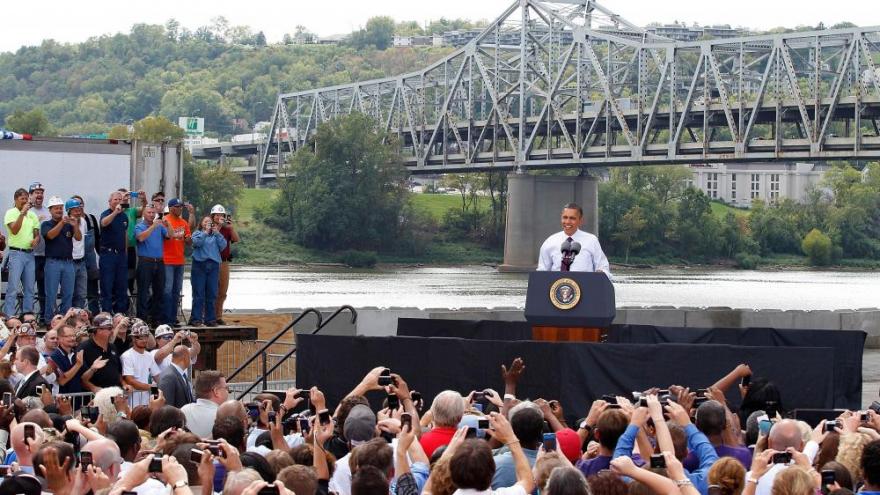 President Barack Obama speaks to a crowd in front of the Brent Spence Bridge on September 22, 2011, in Cincinnati.

(CNN) -- The Brent Spence Bridge, which spans the Ohio River, has long been a political football and a symbol of government dysfunction.

On one of the busiest trucking routes in the United States, with more than $1 billion in freight passing across it every day, the gridlock serves as a constant reminder of unfulfilled promises in the nation's long-running infrastructure debate.

"It's been batted around by both parties for a long time, but the need is now," said Brad Slabaugh, general manager of Hilltop Companies, a construction firm that sits in the shadow of the bridge. "We had promises from past administrations and we would like to see those promises come through."

As a new debate begins over President Joe Biden's ambitious infrastructure proposal, the Brent Spence Bridge offers a lesson for the challenges facing the administration and Congress in tackling one of the thorniest issues in Washington that touches every part of the country. Touted as a rare bipartisan opportunity, infrastructure is seldom one that has a successful outcome in a deeply divided capital.

It was a decade ago when then-President Barack Obama traveled here to sell his own infrastructure plan, known as the American Jobs Act. He stood on the grounds of the Hilltop concrete plant in 2011 and used the bridge as a backdrop to make his case to fix a bridge that has been classified as "functionally obsolete" for more than two decades.

"My question is what's Congress waiting for?" Obama asked on that sunny afternoon, with Slabaugh and others watching in a small audience. "Why's it taking so long?"

But the Obama infrastructure plan fell short in the Republican-controlled Congress.

Then came a new President with a new pledge.

"Replacing the Brent Spence Bridge in Cincinnati is critical to the region," Donald Trump said on a visit to Ohio four days before winning the White House in 2016.

The promise would later ring hollow, after his infrastructure plan never materialized and became a punchline.

The Brent Spence Bridge, which was built nearly 60 years ago as a critical link in the I-75 corridor stretching from Miami to Michigan, is but one of many long-neglected projects that are awaiting a new look from the Biden administration's American Jobs Plan.

The proposal is bigger and bolder than previous plans, going far beyond just roads and bridges. The negotiations between the White House and Congress over the coming months will determine whether it's too big or too bold.

The $2 trillion proposal calls for much more, including $100 billion to put broadband internet within reach for every American, $400 billion to increase wages for those who care for the elderly and $45 billion to replace lead pipes.

"To automatically say that the only thing that's infrastructure is a highway, a bridge or whatever -- that's just not rational," Biden said this week. "It really isn't."

As the President invites lawmakers from both parties to the White House next week to begin negotiations, the very definition of infrastructure is a critical part of the discussion, along with how to pay for it. He is proposing raising the corporate tax rate to 28% from 21%, an idea causing Republicans like Sen. Rob Portman of Ohio to recoil.

"For the President to start off with tax increases, he knows that's a nonstarter for most Republicans, maybe all Republicans," Portman told CNN on Friday. "So let's figure out ways to pay for it to make more sense, including user fees, which is what typically we do with infrastructure."

Portman said he wants to work with the White House on a bipartisan bill, which he believes there would be support for, but he thinks the plan that Biden unveiled last week goes too far beyond traditional infrastructure.

"It's just way too big," Portman said. "My hope is he'll focus on real infrastructure and work with us on how to pay for it."

Sen. Sherrod Brown of Ohio said he and other Democrats believe a majority of Americans support raising corporate taxes to help pay for long-awaited infrastructure improvements. He also rejected the suggestion that the proposal is too broad.

"This argument about the definition of infrastructure is downright silly," Brown told CNN. "It's a bill that's going to meet the needs -- the crying needs -- for a generation of rebuilding our country."

Democrats are mounting an aggressive rebuttal to the rising Republican argument about the scope and cost of the plan, which Senate Minority Leader Mitch McConnell has referred to as a "Trojan Horse for massive tax increases." At the same time, the politics of this particular plan are local, with the Brent Spence Bridge running directly into his home state of Kentucky.

"It's not up to Mitch McConnell and Senate Republicans to decide what's partisan or nonpartisan or bipartisan," Brown said. "It's up to the American public and the public that overwhelmingly wants to see this infrastructure plan."

Yet it's an open question whether Democrats will remain unified behind the proposal, particularly with Sen. Joe Manchin of West Virginia raising concerns about trying to pass the bill through a budget process known as reconciliation, which Democrats can do without Republican support.

'We're frustrated if politics gets in the way'

Getting the legislation passed is a critical test not only for the scope of Biden's agenda, but also for whether government can deliver on promises to repair the nation's crumbling infrastructure -- much to the frustration of people who try to drive over the Brent Spence Bridge from here in downtown Cincinnati into Covington, Ky.

"We've been here before. We've had multiple presidents say, 'Hey, we're going to take care of major infrastructure needs,' and that did not happen," said Brent Cooper, president of the Northern Kentucky Chamber of Commerce. "We're very concerned and nervous about it. It's part of why we would like to see a bipartisan approach to this."

Cooper, who owns an IT business whose technicians are impacted by the traffic jams and delays on the bridge, said he was "thrilled" that Biden is focusing on infrastructure. He said most business owners are opposed to an increase in the corporate tax, preferring to finance the $2.5 billion project through "some sort of user or miles-driven fees."

"We're frustrated if politics gets in the way of getting something built," Cooper said.

The chief executive officer of a major Cincinnati-area company said the importance of rebuilding the nation's decrepit infrastructure should not become consumed by a debate over raising corporate taxes.

"Some people will bark, but you've got to pick up the dinner check somehow. It's time to get on with it," the chief executive told CNN, speaking on condition of anonymity to talk frankly about the controversial tax issue. "It would be a gross shame if another opportunity to pass an infrastructure plan is squandered."

Mark Policinski, the chief executive of the Ohio-Kentucky-Indiana Regional Council of Governments, who has been advocating for a new Brent Spence Bridge for more than a decade, said he believes this moment is different. The pandemic opened a greater willingness for government spending, he said, as well as sparked more of an awareness among consumers about where their goods come from.

"We've been promised so many times that this is going to be pushed across the goal line, but I think it is different," Policinski said. "People understand today, better than they ever had, how vulnerable an economy is."

The White House has not identified projects that would be included in the infrastructure proposal, but the President said 10 major bridges that highly impact the nation's commerce would receive top priority. State and local officials on both sides of the Ohio River say they are confident the Brent Spence Bridge would be among the projects selected if a bill passes.

A senior administration official told CNN that a competitive grant program would be established to "fund large bridges that move high volumes of people and freight and are in need of reconstruction or replacement based on their condition or inability to manage current traffic volumes."

From the banks of the Ohio River, at the Hilltop construction company, all eyes will be on the infrastructure debate as it gets underway in Washington.

The gridlock, which can be seen most every day as trucks line up for loads of cement, is bad for business. A 4-mile drive can routinely take as long as 75 minutes, which is longer than the concrete can sit without being unloaded.

Slabaugh said he likes most of what's in Biden's infrastructure bill. Tax increases aren't his preference, but he said a new bridge is critical to his business, so he hopes a compromise can be reached.

"I'm not a big proponent of tax increases," he said, "but the bridge needs to be built in one fashion or another."