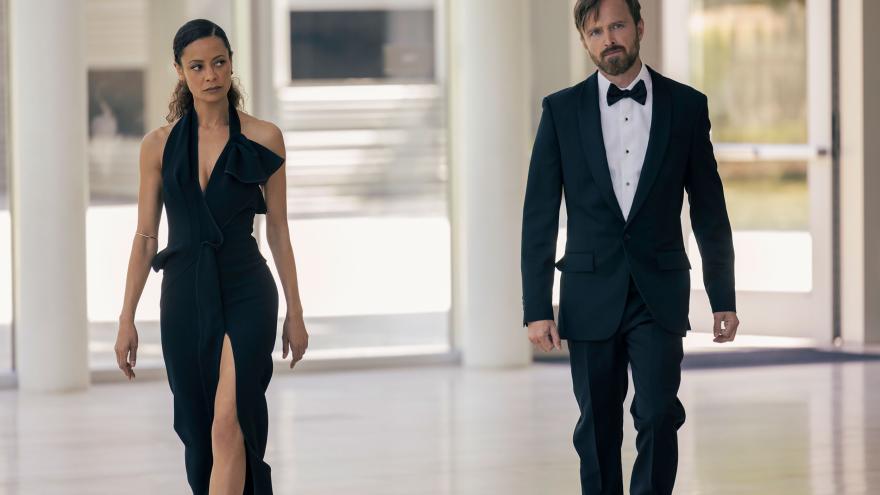 (CNN) -- "Westworld" returns, featuring several familiar faces in unfamiliar roles, while extending aspects of a third season that creatively sailed off the rails. While there is surely intelligent life out there eager to see where this goes, at this point it's not so much a question of not being able to follow the series through its convoluted maze as simply not feeling as if it's worth the energy to try.

Looking more conspicuously futuristic in its design (a byproduct of having escaped the original amusement-park-for-adults setting), the HBO drama still boasts an assortment of really good actors, augmented by James Marsden returning and Oscar winner Ariana DeBose and Daniel Wu among the new additions.

Once again, though, they're largely operating on parallel tracks, yielding random acts of violence without many clear indications as to where this train is heading. And while the long lapses between seasons surely haven't helped, it's not readily apparent that a more accelerated schedule would fix the bugs in the system.

The most promising thread involves the renegade A.I. Maeve (Thandiwe Newton), who reunites with Caleb (Aaron Paul), taking off on a mission together. Their path intersects with the villainous and ruthless William (Ed Harris) as he pursues his own shadowy scheme, a character originally elevated by first-season mystery who is perhaps most symbolic of the show's decline, having become progressively less interesting ever since.

Stalwarts like Evan Rachel Wood and Jeffrey Wright are also back on board, but through four episodes it's hard to make much of their storylines, which only feeds the sense that "Westworld" is constructed as roughly three programs in one. As for how the producers will bring it all crashing together, whatever goodwill and trust they generated in the past has mostly evaporated, creating less faith that they're playing six-dimensional chess and more suspicion that they're spending a whole lot of HBO's money on an elaborate jigsaw puzzle. (HBO, like CNN, is a unit of Warner Bros. Discovery.)

Given "Westworld's" initial acclaim in turning Michael Crichton's original concept on its head and forcing the audience to see the exploitation of these synthetic beings through their eyes, the series is too high-profile a property to be completely ignored.

Still, having dutifully sat through half of this eight-episode season, the sense that the pieces can be satisfactorily put together, at least for those who were skeptical going on, feels asked and answered.

At one point, Maeve makes a darkly wry reference to the fight that looms by saying "disposing and dismembering. Just like the good old days."

Alas, the "good old days" are just that, and except for those most invested in making "Westworld" make sense, no matter how much you play with the wiring it doesn't look like they're coming back.