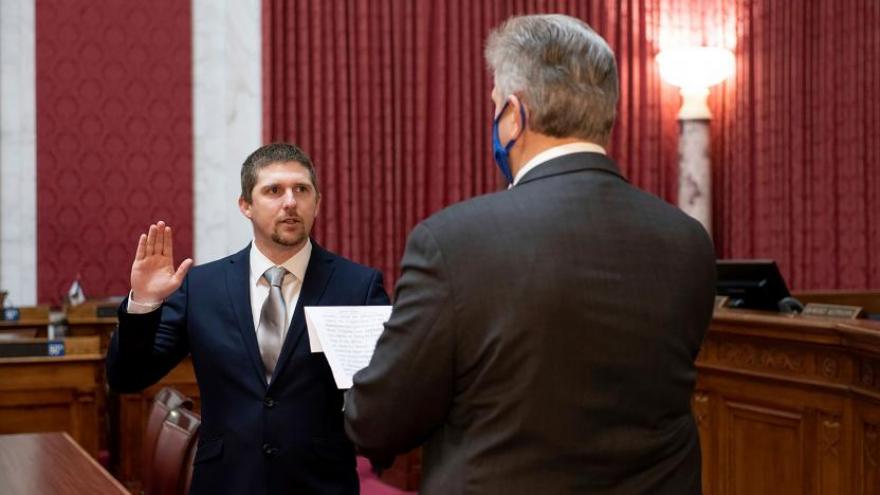 West Virginia House of Delegates member Derrick Evans, left, taking the oath of office on December 14, 2020, recorded video of himself and fellow supporters of President Donald Trump storming the U.S. Capitol in Washington, D.C., on January 6, 2021 prompting calls for his resignation.

(CNN) -- A West Virginia state lawmaker was among pro-Donald Trump rioters who stormed the US Capitol in Wednesday's deadly insurrection.

Republican Del. Derrick Evans, a supporter of President Donald Trump, recorded a Facebook Live video in which he can be heard shouting "We're in! We're in baby!" while moving among a crowd of rioters as he walked through a doorway of the Capitol.

He has denied taking part in the destruction and violence that left four people dead and multiple officers injured and has since deleted the clip, but not before it was shared on social media and aired by CNN affiliate WCHS. In another video posted to his Facebook page Wednesday morning, Evans laughs as he predicts a riot.

"They're making an announcement right now saying if (Vice President Mike) Pence betrays us you better get your minds right because we're storming that building," he says and then laughs. "I'm just the messenger. Don't be hating on me. I'm just telling you what I'm hearing right now on the grounds."

Evans said later Wednesday he only filmed the event as an "independent member of the media to film history," though it does not appear he has any experience working as one.

CNN has called and emailed Evans for additional comment and reached out to the West Virginia Republican Party.

Evans' lawyer, John Bryan, asserted in a statement Thursday that his client "had no choice but to enter" the Capitol due to the size of the crowd he was in, and that "it wasn't apparent to Mr. Evans that he wasn't allowed to follow the crowd into this public area of the Capitol, inside which members of the public were already located."

"He engaged in no violence, no rioting, no destruction of property, and no illegal behavior," Bryan said.

He added that Evans "will not be resigning his public office" and "deeply regrets that (violent) actions occurred during an otherwise peaceful and expressive day."

In a statement Wednesday, West Virginia House Speaker Roger Hanshaw, a Republican, said he has not spoken with Evans and condemned the violence.

"I don't know the specifics of his involvement, I have only seen what has been posted on social media so far, and I'm sure more details may come out soon," he said. "He will need to answer to his constituents and colleagues regarding his involvement in what has occurred today."

Video of the lawmaker's participation in the mob has prompted calls for his resignation and was criticized by lawmakers, including West Virginia Gov. Jim Justice, a Republican.

"I don't know this gentleman at all, but I think that's absolutely a shame," Justice told WCHS on Wednesday. "From the standpoint of a delegate-to-be storming the capital of the United States of America, how could you possibly condone that?"

West Virginia US Sen. Joe Manchin, a Democrat, told the station that the state House should "sanction" Evans for his actions which in Manchin's view "shouldn't be acceptable at any time in government."

Dozens of charges are expected in DC's local and federal courts, including as many as 15 federal cases against people who are believed to be involved in the more serious alleged crimes law enforcement officials told CNN Thursday.

DC's Metropolitan Police Department has made 80 arrests related to unrest this week in downtown DC, including 68 arrests last night following an insurrection at the US Capitol, according to a spokeswoman for city Mayor Muriel Bowser. Federal authorities have sought the public's help in identifying those involved.

Former Washington, DC, Police Chief Charles H. Ramsey, who is a law enforcement analyst for CNN, said Thursday that a variety of charges could be brought against the rioters and Evans in particular, calling for prosecutors to use the "fullest extent of the law."

Because Evans is an elected official, Ramsey explained, he should be censured or recalled for his participation in addition to criminal charges. Wednesday's riot falls under sedition, Ramsey said, but added that it would ultimately be up to prosecutors on how they wanted to handle it.

"I consider it that, but it is up to a federal prosecutor. I personally think that is appropriate and it sends the right message," he said.