Investigators search home that may be linked to sale of gun to Texas shooter, sources say 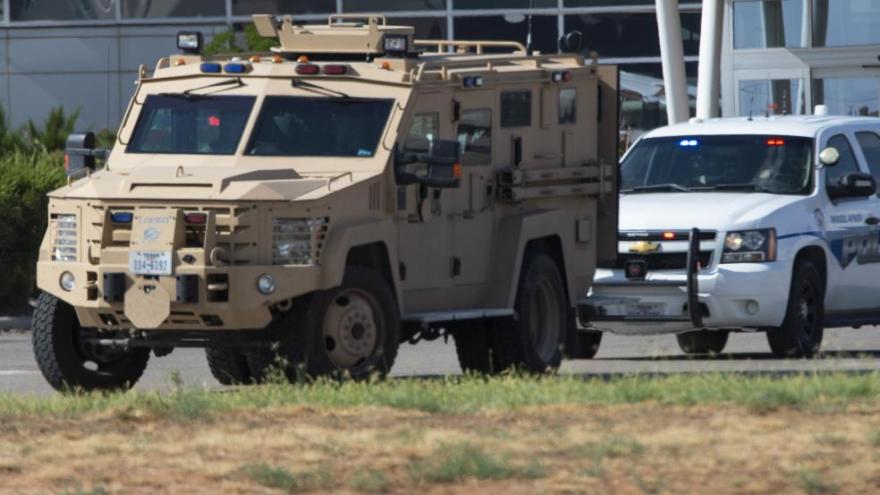 The West Texas man who killed seven people and wounded 25 in a shooting rampage failed a background check during an attempted firearm purchase in 2014 because he had earlier been adjudicated "a mental defective" and temporarily committed to an institution, three law enforcement sources told CNN on Wednesday. Full Credit: Tim Fischer/Midland Reporter-Telegraph/AP

(CNN) -- Federal investigators on Wednesday searched a Texas home as part of the investigation into the sale of a weapon used in a shooting rampage that killed seven people and wounded 25, two law enforcement officials told CNN.

The home in Lubbock is associated with the alleged seller of the firearm used by the gunman, who went on a killing spree in and around Odessa, an official said.

The investigation into the gun sale highlights one of the loopholes in the patchwork of federal gun laws. Because the sale was a so-called private sale, the seller isn't required to conduct a background check on the buyer, which is required in sales by licensed gun dealers.

Authorities are seeking to determine whether the sale violated federal law, which requires that sellers register as gun dealers if they're buying and selling guns for profit and acting essentially as gun dealers.

The gunman failed a background check during an attempted firearm purchase in 2014 because he had earlier been adjudicated "a mental defective" and temporarily committed to an institution, three law enforcement sources told CNN on Wednesday.

Seth Ator, 36, had been committed to an unidentified institution in McLennan County in 2006 because he was deemed a danger to himself and/or others, according to one source.

The commitment occurred more than a decade ago, a second source said.

Still, Ator managed to buy the firearm used in Saturday's mass shooting within the last couple of years, according to a third source. Police said Ator used an AR-15-style rifle. He was killed by police.

"A mental defective" is a term used in federal law to describe one category of people prohibited from purchasing or owning a firearm.

Ator tried to buy a firearm on January 14, 2014, but wasn't allowed to, the Texas Department of Public Safety told CNN in an email.

The department is prohibited by law from disclosing the reason he was denied the purchase, the DPS said.

In July 2001, Ator was charged with criminal mischief after breaking a window at the DePaul Center, a psychiatric and drug abuse facility in McLennan County, according to Tom Needham, the county's executive assistant district attorney.

The DePaul Center requested that the charge not be prosecuted, the prosecutor said.

"He paid for the window and apparently they asked that it be dropped," said Needham.

The prosecutor said he could not confirm that Ator was committed to the DePaul Center, only that the criminal mischief charge stemmed from him having broken a window there.

Ator did receive an "evaluation for suicidal tendencies" at the DePaul Center in 2001, and his father reported that Ator had made "suicidal threats and attempts," according to a McLennan County Sheriff's Office arrest report.

Additionally, in July 2001, a Lorena, Texas, woman complained that Ator had threatened her son's life following "a series of problems" that involved Ator and his relationship with a female member of the woman's family, according to the arrest report.

An officer issued a criminal trespass warning to Ator that month, according to the report, but a few weeks later Ator returned to the family's home at 3:30 a.m. and removed a bedroom window screen.

The following day, an officer went to an apartment where Ator was staying, but Ator jumped out the bedroom window from the second floor and escaped, according to the report.

Ator was charged with criminal trespass and evading arrest, according to the sheriff's department documents.

Needham added, "Mental health records are confidential, but I am not aware of any records concerning mental health adjudications or commitments."

In June 2012, Ator was arrested and charged him with public intoxication after he got in a fight, said Larry Adams, assistant chief of police for the city of Woodway, Texas.

Adams said witnesses told police Ator had been "drinking all night" and that one person head-butted him, leaving cuts on his face and nose. The charge is a Class C misdemeanor, which Adams said may not show up in court record searches.

Brandon Hart, a former friend of the gunman, said Ator took a knife and swung it at another person at the house. "It was like he just snapped... He became very paranoid and angry," Hart said, adding, "I just thought, wow, that was insane."

Hart said he and others at the party were unable to calm Ator down and that the fighting escalated.

Hart described Ator as "generally reserved and quiet. He didn't seem to have a whole lot of friends." He said Ator was nice but also seemed lonely.

Kyle Douthit, who described himself as a longtime acquaintance of Ator, told CNN Ator believed "the whole world was against him."

Douthit said Ator dealt with challenges throughout his life.

"He wasn't a bad person. He just didn't like the way people treated him. He would get paranoid," Douthit said. "He always had this aggression when he was drinking. He would all of a sudden just think you were against him."

When the troopers pulled Ator over Saturday, "I think he was just done," Douthit said.

"He was probably just doing it the way he wanted to do it," Douthit said. "I don't think it had anything to do with anything going on in the world. It was just his world."

The ATF, the FBI and the Texas Department of Public Safety are "aggressively following up on" the source that supplied the firearm that Ator used in last weekend's rampage, according to the ATF.

Investigators are still searching for a motive in the mass shooting.

The man showed up to work Saturday "in a distressed mental state," and was fired, said FBI Special Agent in Charge Christopher Combs.

Combs said the firing wasn't the reason for the shooting spree and that he was "already enraged" when he showed up for work.

Ator had been "on a long spiral going down," and he had "probably been in trouble for a while," Combs said.

The shooting began Saturday when Texas Department of Public Safety troopers pulled Ator over for failing to use his turn signal, and Ator began firing at them. Speeding away, he went on to spray bullets as he drove west toward Odessa and into the city. At one point, he hijacked a US Postal Service truck, killing the mail carrier.

Ator was finally stopped in a parking lot after officers rammed the hijacked truck and gunned him down.