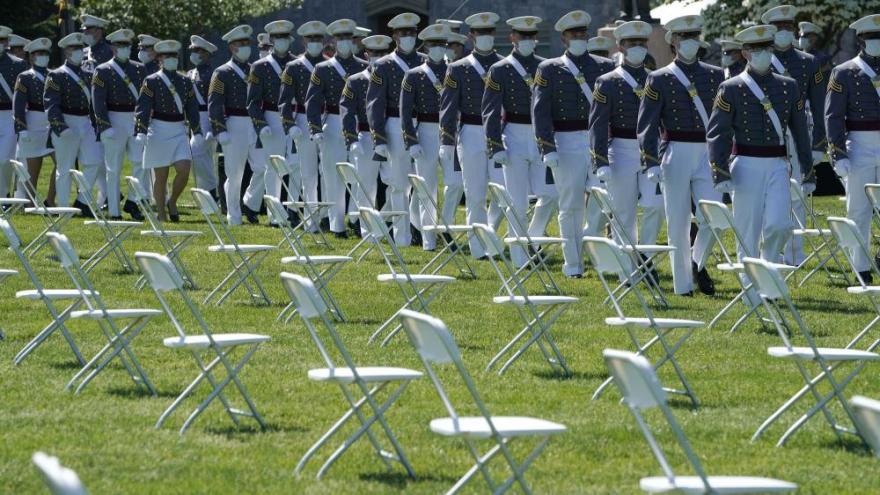 (CNN) -- The US Military Academy at West Point is dealing with the fallout from a major cheating incident involving 73 cadets, the largest cheating episode at the elite school since 1976.

Seventy-two of the cadets accused of breaking the academy's famed honor code are first-year cadets, referred to as the "plebe year," according to the academy. One student is a sophomore. All of them are accused of cheating on a calculus exam in May, when West Point had shifted to virtual classes due to the coronavirus pandemic.

There are about 1,200 students in the first-year class.

The cheating accusations were first reported by USA Today.

"The honor process is working as expected and cadets will be held accountable for breaking the code," Secretary of the Army Ryan McCarthy said in a statement to CNN.

Evidence of cheating was discovered by instructors who found "irregularities" while grading the calculus exams, according to Ophardt.

Two of the cases were dropped for lack of evidence and four other cadets resigned from the military academy. The remaining 67 students await a decision on their fate.

A total of 59 cadets admitted to cheating on the exam, the academy said, with 55 of those now enrolled in the academy's "willful admissions" process, a rehabilitation program that involves after-hours classes, discussions on ethics and the honor code, and being on probation for the rest of the year.

Four of the students who admitted to cheating did not qualify for the rehabilitation process, according to the academy, and will face a cadet advisory board composed of fellow students, who will make a recommendation as to their fate, ranging from probation to expulsion.

The academy's superintendent, Lt. Gen. Darryl Williams, will make a final determination as to what is to happen to them.

A full investigative hearing is being conducted for the eight cadets who did not admit to cheating, the academy said.

West Point has been rocked by major cheating scandals before, notably in 1951 and in 1976, the latter of which involved 152 cadets.

Many of the cadets from the 1976 incident were readmitted because of how the investigations and punishments were handled.