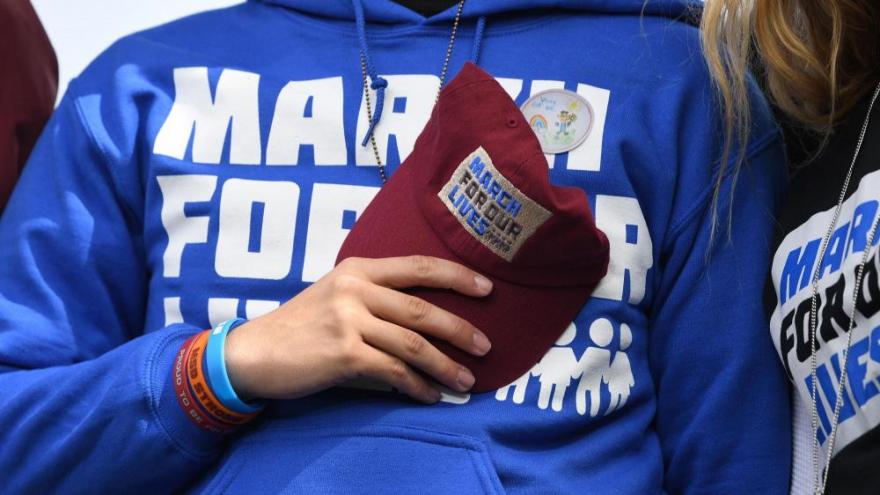 (CNN) -- Monday marks four years since the deadly shooting at the Marjory Stoneman Douglas high school in Parkland, Florida, and the nation remains plagued by the gun violence that the students-turned-activists who were in the building that day pledged to fight.

In honor of the anniversary, those activists are hoping to pile pressure on President Joe Biden to take action on the issue.

Youth-led gun violence prevention group March For Our Lives, along with advocacy organizations Guns Down America and Change the Ref, on Monday launched a tool called the "Shock Market" that will track gun violence in the US since Biden took office.

To kickstart its push, the coalition rallied outside the White House on Monday, urging Biden to take a more aggressive approach.

"Biden has been a friend but not a leader," David Hogg, founder of March For Our Lives and a survivor of the Parkland shooting, told CNN about Biden's willingness to listen to the group's concerns.

"He's made small steps but it's not enough. The President hasn't been receptive to our demands. We expected this from (former President Donald) Trump, but we're shocked that it's coming from Biden," he said.

The rally will feature a billboard truck displaying the more than 47,000 gun deaths that have occurred during the Biden administration so far, as well as speeches from Hogg and Manny Oliver, whose son Joaquin was one of the 17 people killed in the Parkland shooting. Oliver founded Change the Ref, a group that uses art to raise awareness about gun violence.

Oliver was arrested on Monday after he climbed a crane near the White House and hung a large banner that read, "45K people died from gun violence on your watch" -- a message directed at Biden.

"Three individuals were arrested from the scene," Metropolitan Police Department spokesman Brianna Burch confirmed, "The incident is cleared, and the roads are re-opened."

In order to combat gun violence, the coalition is asking the President to "establish a national office of gun violence prevention," further "invest in community violence intervention programs," "hold the gun industry accountable" by nominating a new director to lead the Bureau of Alcohol, Tobacco, Firearms and Explosives and "use the presidential bully pulpit" to bring attention to the issue and coordinate a comprehensive response.

The initiative on behalf of March For Our Lives, Guns Down America and Change the Ref comes following a spike in gun violence last year. Law enforcement agencies in some of the country's biggest cities seized or recovered near decade-high numbers of firearms and ten of the country's most populous cities set homicide records in 2021.

Recognizing the recent uptick in crime, Biden earlier this month turned his attention to gun violence with a trip to New York, where two police officers were shot on the job last month.

As Democrats grapple with how to tackle a problem that has been used against them by Republicans with some success in past elections -- and is shaping up to be a key issue in the midterms this fall -- Biden elevated his party's work and proposals to combat illegal guns onto the national stage.

The President reaffirmed his call on Congress to pass gun laws, like universal background checks, and reach bipartisan agreement on the fiscal year 2022 appropriations bill -- which includes significant funding for the strategies he's proposing.

But, according to March For Our Lives, Guns Down America and Change the Ref, Biden's response to the rise in gun violence has so far has been insufficient.

While the President continues to tout community based intervention investments and reiterate campaign promises, he has yet to nominate a new ATF director after withdrawing David Chipman's nomination in September -- which, according to the coalition of groups, is a concrete step the President must take.

Asked how this pressure campaign will be different that past waves of activism, both Hogg and Volsky said they believe Biden cares about the issue, is receptive to listening to their concerns and just needs an extra push.

"We need to show Biden that over the past four years we have showed up. The movement helped elect the most pro-gun violence prevention President. He's already acted on this in the past, and he needs to do it as president," Hogg said.

For his part, Volsky said this campaign is unique for two reasons. Not only is the gun violence crisis getting worse, but the President is aware of that reality, made evident by his trip to New York.

"The missing ingredient is public pressure, and that's the gap this campaign is trying to fill," Volsky said.

"The significant increase in gun violence over the last couple of years is simply too hard to ignore and, I do believe the President when he says and when he said that this issue is a priority for him," Volsky said.

"And so if you're able to organize enough public pressure to get him to understand that there's actually a political cost to ignoring the promises he made, then you can get the President to move."