We're entering year two of the pandemic. Here's what happens next 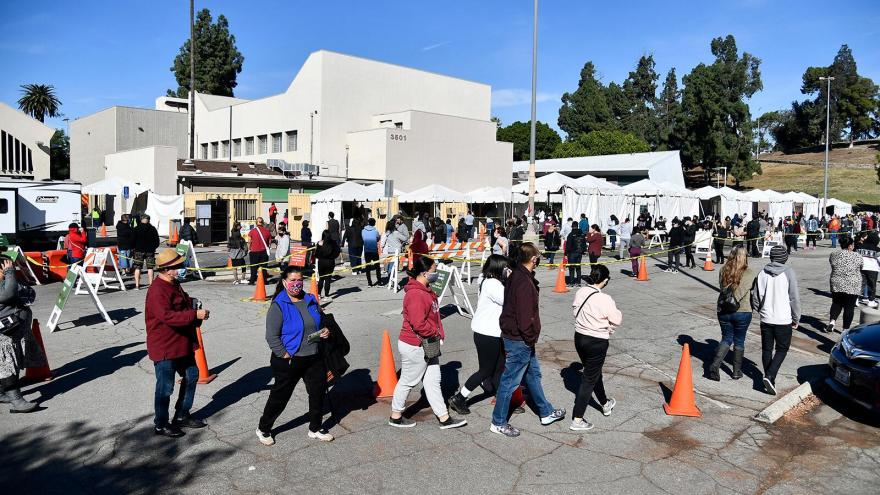 People wait in line at a coronavirus testing and vaccination site on December 30, 2020 in Los Angeles, California.

(CNN) -- Our global coronavirus nightmare is entering its second year, and we're hanging on the best we can.

Our lives have been turned upside down, the economy is sputtering and more than 1.8 million people have died -- 351,000 of them in the US, more than any other country in the world.

As a nation, we're exhausted. American hospitals and health care workers are overwhelmed. The grief and trauma are piling up. The vaccine rollout is behind schedule, a new strain of the virus has emerged and experts fear a post-holiday explosion of new cases and hospitalizations.

The next few months will likely be dark and painful. But there's a promise of light on the horizon. With two vaccines approved in the US and more on the way, there's hope for a gradual return to normalcy -- whatever that looks like in a post-pandemic world.

Here's what to expect in this new year.

The next few months will be rough

We've had a tough holiday season -- and things aren't expected to get better for at least the next few weeks.

In December alone in the US, we lost more than 77,000 people. It was the deadliest month of the pandemic so far, and health officials fear the ripple effects of holiday gatherings will soon make things worse.

More than 1.1 million travelers jammed US airports the Monday after Christmas. The urge to connect with loved ones after months apart could bring another wave of infections and hospitalizations -- yet another setback in our long fight to contain the virus. By some estimates, 80,000 Americans could die in the next three weeks.

"The next couple of months are going to be awful," says Dr. Jonathan Reiner, professor of medicine at George Washington University. "We're going to lose 3,000, maybe more, people a day, probably until we're well into February. And then, we should start to see some light."

Government officials are preparing for dire scenarios. Health care workers are setting up rooms for sick patients in hallways, lobbies and parking lots.

In hard-hit Southern California, ICUs are at capacity and officials have extended stay-at-home orders. Atlanta hospitals are over capacity, with some people waiting days to be admitted. Georgia's governor opened an overflow coronavirus unit at a downtown convention center.

One epidemiologist in Los Angeles says the US is now beyond waves or surges. "This is a viral tsunami that we are now experiencing," he says.

Officials will have to move faster on vaccinations

First the good news: Sleeves are rolling up across the country for the highly effective Pfizer and Moderna vaccines.

More than 4.2 million people have received the first of the two doses required to protect against the virus.

The rollout has been bumpy. With no federal mandate for how to administer the vaccine, it's up to the states to decide who gets the shots and when, creating a confusing patchwork of rules that vary across the country.

Some 13 million doses have been distributed so far, but we've fallen short of the goal to vaccinate 20 million people by January 1.

Experts estimate the ideal number would be 1 million vaccinations a day. But Dr. Peter Hotez, a dean at Baylor College of Medicine, says he's not sure the US can pull that off.

Supply constraints and logistical challenges have complicated administering a vaccine in the throes of a pandemic that has pummeled health departments nationwide.

It's a delicate process. Pharmaceutical companies must churn out tens of millions of doses of the vaccines, which each have specific storage requirements and schedules.

For example, both vaccines must be stored at subzero temperatures before they are thawed at clinics and hospitals. Pfizer's must be stored at about minus 75 degrees Celsius -- about 50 degrees colder than any vaccine currently used in the United States. In Wisconsin, officials had to throw out more than 500 doses of Moderna's vaccine after a hospital pharmacist let them sit out at room temperature.

Some states have said they don't have enough supplies of the Pfizer vaccine while the manufacturer reported millions of unclaimed doses, adding to the confusion.

Even with the delays and questions about who should get the vaccines first, the nation's top infectious disease expert, Anthony Fauci, is confident a vaccine will be available to most Americans by April.

The availability of two vaccines by 2021 is a stunning achievement when you consider we barely understood this virus a year ago. And it's a hopeful sign we're close to beating back a plague that brought the world to its knees.

But the vaccine process will take months and it's still important for everyone to wear masks and social distance until we reach herd immunity -- that magical point when so many people are inoculated that the virus has nowhere left to spread.

So don't put on your party shoes just yet.

Both Pfizer and Moderna require two doses 21 and 28 days apart, respectively. The vaccines provide partial protection after the first dose and full protection within two weeks of the second one.

But it's still not clear whether the vaccines prevent spread of the virus. The Pfizer vaccine, for example, is effective at preventing symptomatic illness and severe disease. But studies haven't looked at whether it prevents someone from carrying coronavirus and spreading it to others. It's possible someone could get the vaccine but still be an asymptomatic carrier.

Then there's the question of how quickly the vaccines will get to people and how readily they will take them. Misinformation and mistrust about Covid-19 vaccines is rampant on social media, and recent polls have shown almost a third of Americans say they won't get vaccinated.

In short, our behavior will keep determining the trajectory of this pandemic.

Scientists worry more cases of a new strain will emerge

Health experts are rushing to slow the spread of Covid-19 before more strains complicate vaccination efforts.

A new, more contagious variant of the virus circulating in the UK has recently been discovered in Colorado, California and Florida, and at least 36 countries. The new strain spreads more quickly but does not appear to be more deadly.

It's unclear how one Colorado man got infected with the new strain because he had no known history of travel. That has brought concerns that the variant has been spreading in the US undetected and that more cases will emerge.

Pfizer and Moderna are testing their shots to determine whether they're effective against the variant.

Scientists are checking to make sure the new variants cannot outsmart the vaccine. But many health officials have downplayed concerns that the vaccines won't work against the new strain.

"I don't think it will break the vaccine," said Trevor Bedford, an associate professor at the Fred Hutchinson Cancer Research Center.

But there's hope of herd immunity in 2021

While vaccinations and masks will go a long way in taming a raging pandemic, the relief will be gradual.

Outbreaks will recede as vaccines reach most Americans, giving health care workers more breathing room to help the most vulnerable.

"As a nation, we'll recover faster if you give the vaccine less work to do," says Rochelle Walensky, incoming director of the Centers for Disease Control and Prevention.

Fauci says April, May, June and July will be open season for anyone to get vaccinated. And he says the US could return to normal life by early fall if states get on schedule with vaccinations.

Herd immunity will be achieved if about 70% to 85% of the population gets vaccinated. Once we reach that threshold, the spread of infections becomes much less likely.

"By the time we get to the early fall, we will have enough good herd immunity to be able to really get back to some strong semblance of normality -- schools, theaters, sports events, restaurants," Fauci said.

Just imagine: Americans going to the movies, going out to hear live music and meeting friends inside restaurants without looking at everyone as a potential threat.