'We're doing all we can': Biden speaks on Hurricane Ida relief efforts 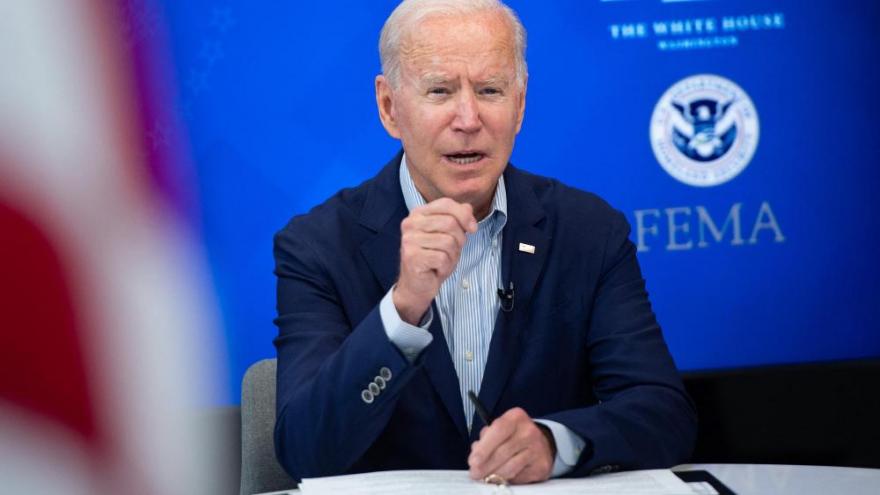 (CNN) -- President Joe Biden spoke Monday afternoon on Hurricane Ida relief efforts as he met virtually with a host of leaders involved in the response to the massive storm that has rocked the Gulf Coast.

"We know Hurricane Ida had the potential to cause massive, massive damage, and that's exactly what we saw," Biden said, speaking from the White House.

Biden said more than 5,000 members of the National Guard had been activated to support with search and rescue and recovery efforts. He urged people in affected areas to continue sheltering in place if it was safe for them to do so and tried to assure them that help is on the way.

He ran down a number of actions the federal government has taken including authorizing drones and satellites to assess the damage to energy infrastructure as the government works with private sector energy providers to restore power to the more than one million Louisianans without electricity.

"We're doing all we can to minimize the amount of time it's going to take to get power back up for everyone in the region," the President said.

Biden told the governors and mayors at the briefing: "We're going to stand with you and the people of the Gulf as long as it takes for you to recover."

The President said he had asked the Federal Aviation Administration to work with electric companies in Louisiana and Mississippi to authorize the use of surveillance drones to assess Ida's damage to energy infrastructure, as well as asked the Pentagon and the Department of Homeland Security to immediately make available any satellite imagery that could assist in assessing the damage.

"The main thing I want to make clear to all of you is we're providing any help that you're going to need," Biden told the leaders at the briefing.

Biden said White House senior adviser and director of the Office of Public Engagement Cedric Richmond would be a "direct line to the White House" throughout the recovery. Richmond served as a Louisiana congressman for 10 years.

"He knows the area, he knows the people ... who have been affected by Ida, and he knows how to get things done in the government," Biden said of Richmond.

In order to assist those who have lost cell phone service in the region because of the storm, Biden said the Federal Communications Commission has worked with a cellular providers to allow customers to get a cell signal no matter who their carrier is.

"This is going to be a long haul," Louisiana Gov. John Bel Edwards, a Democrat, told Biden. He said his state would need assistance with a housing program and that he would be coordinating with Richmond to get a program up and running.

"We are still in a life-saving mode here, doing search and rescue," Bel Edwards said.

White House press secretary Jen Psaki told reporters on Monday: "While Ida has now been downgraded to a tropical storm, it is going to continue to inflict damage as it moves across the state of Mississippi today and into the Tennessee valley tomorrow."

"This will be a lengthy whole-of-government and whole-of-community response and recovery effort. And we are closely coordinating with state and local officials at every step of the way," Psaki said.

Biden was meeting with Federal Emergency Management Agency Administrator Deanne Criswell and governors and mayors from states and cities affected by Ida after the storm made landfall on Sunday in Louisiana and caused catastrophic damage. A White House official told CNN that Biden would speak on the relief efforts this afternoon.

At least one person is dead and nearly half of the state is without power, including the entire city of New Orleans. State officials have begun search and rescue efforts. Ida has since weakened to a tropical storm, but life-threatening flash flooding has drawn on into Monday.

The White House said the President would be receiving regular briefings throughout the day from his homeland security team on the effects of the hurricane.

Ida made landfall in Louisiana on the 16th anniversary of Hurricane Katrina. It has tied with 2020's Hurricane Laura and the Last Island Hurricane of 1856 as the strongest on record to hit the state.

The President visited FEMA's headquarters in Washington on Sunday to receive a briefing on the storm. He warned the hurricane was a "life-threatening storm" and said "its devastation is likely to be immense."

Biden said equipment and response teams had been positioned in the region, including 2.5 million meals, 3 million liters of water and generators. He said more than 100 ambulances and emergency medical teams had been activated and that his administration had been working with local partners to open "dozens and dozens" of shelters.

Bel Edwards said Monday that clean up from Hurricane Ida "is going to be a fairly long ordeal." He said the state's efforts remain focused on saving lives and that thousands had been deployed to help with search and rescue efforts.