Wendy's breakfast is starting to roll out 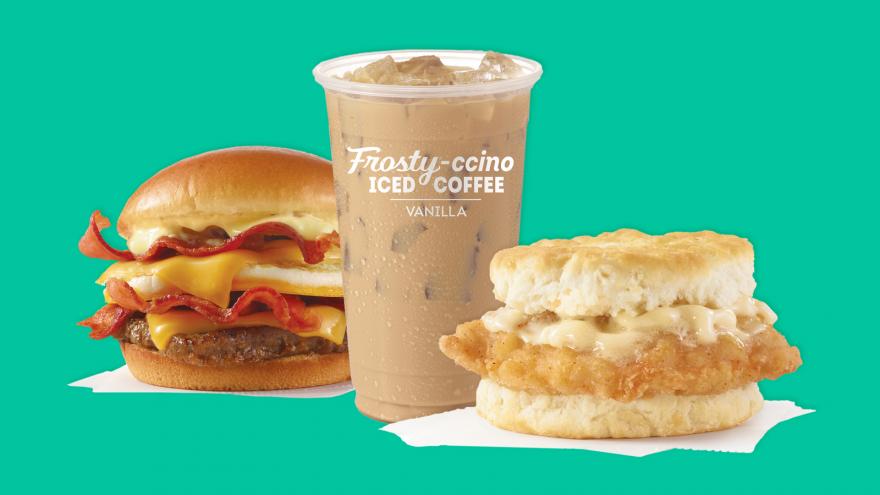 (CNN) -- Wendy's fans eagerly anticipating the Breakfast Baconater can get it sooner than expected.

The company confirmed that several markets have started serving the new breakfast menu ahead of its US launch date of March 2. In September 2019, Wendy's announced that it's entering the highly competitive breakfast battle because it's one of the few growing parts of the day for the fast food industry.

The full menu consists of nine sandwiches, including a morning edition of its famed Baconator. There are three new sandwiches served on croissants, biscuits and classic buns with eggs and meat. It's also debuting a maple bacon chicken croissant and a honey butter chicken biscuit. New side dishes include potato wedges and sausage gravy. There's a new blend of coffee and an iced Frosty-ccino.

Wendy's regularly uses its Twitter account to mock its rivals, including an appearance from Burger King's mascot that appears excited for the new menu.

About 300 locations are serving breakfast already, Wendy's Chief Financial Officer Gunther Plosch said during an analyst call discussing the company's fourth-quarter and full-year financial results Wednesday. And the outcome so far is promising, he said.

To prepare for the national launch, Wendy's has spent the past few weeks training its employees, noted CEO Todd Penegor. The training, he said "has gone very smoothly" because the new menu items are designed to be easy to prepare.

As Wendy's gets ready to make its move, McDonald's, the leader in fast food breakfast, isn't sitting idly by. It has begun offering two breakfast sandwiches for $4 for a limited time. Plus, several other well-entrenched competitors already have breakfast, including Dunkin' and Panera.

Breakfast and late night hours are the only growing segments for the industry, according to food industry group NDP. Wendy's has tried and failed before to offer breakfast. But if all goes well this time around, Wendy's predicts breakfast sales will encompass 10% of its daily sales. The chain doesn't expect breakfast to be profitable until some time next year.

Serving breakfast is costly. Wendy's said in its earnings report released Wednesday that its 2019 fourth-quarter profits fell because of the breakfast investment. The chain is spending around $20 million to hire about 20,000 employees and serve breakfast in its 6,000 locations nationwide. And it plans to spend between $70 and $80 million this year on advertising the new menu.

So far, Wendy's has spent about $17 million of the allotted $20 million breakfast investment. Some of that is being used to recruit workers.

Quarterly sales at its North American restaurants opened at least a year jumped 4.3%. Penegor said in a press release the strong end of 2019 is setting it up for an even better 2020. He said he's "more confident than ever that we will achieve our vision of becoming the world's most thriving and beloved restaurant brand."