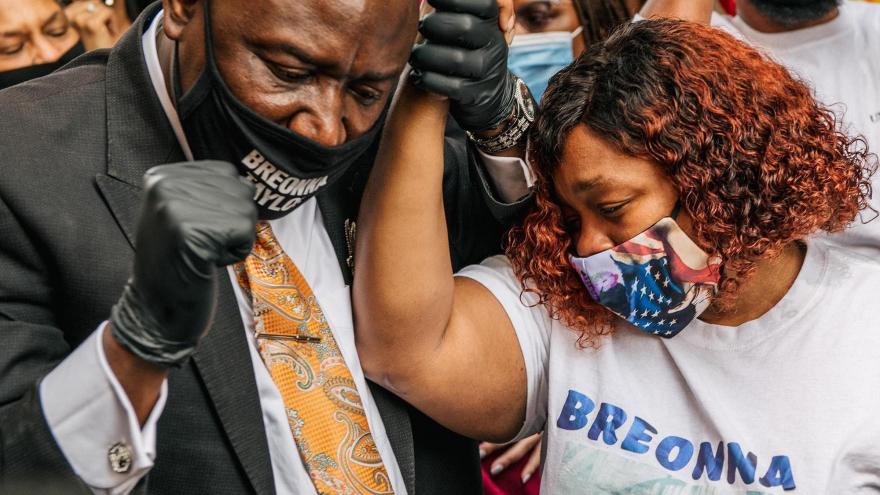 Breonna Taylor's mother learned the fate of the officers involved in her daughter's killing two minutes before Attorney General Daniel Cameron made his announcement, family attorney Sam Aguiar told CNN. In this photo, Attorney Ben Crump and Tamika Palmer, mother of Breonna Taylor, celebrate after a news conference on Sept. 15 when it was announced that the city of Louisville will institute police reforms and pay $12 million to the family for the killing of Breonna Taylor.

(CNN) -- Breonna Taylor's mother learned the fate of the officers involved in her daughter's killing two minutes before Attorney General Daniel Cameron made his announcement, even after it was expected the family would have a heads-up on the decision, family attorney Sam Aguiar told CNN.

"She had to drive all the way down there to be told this, despite two advanced requests from me to not force her to drive down only to learn no indictments," Aguiar said. "I told them that would be hell for her."

Tamika Palmer was surrounded by her youngest daughter Juniyah Palmer, her sister Bianca Austin, attorneys Lonita Baker and Sam Aguiar as Cameron delivered the news that one officer, Brett Hankison, would be indicted for wanton endangerment for firing into a neighboring apartment on the night Taylor was killed.

There was "a lot of sadness and weeping," said Christopher 2X, a community activist who is assisting Palmer and who stood outside the room when Cameron announced the decision. "It saddens me to witness, again, a mother of a victim in such excruciating pain ... But it was expected in regards to how things have evolved over time in the Louisville Metro community, they usually always end up like this when those families who are looking for justice don't receive it."

CNN has reached out to the attorney general's office for comment.

The charges rendered by the grand jury stemmed from shots fired into the apartment of Taylor's next-door neighbors; not the hail of bullets that entered Taylor's apartment, leaving her dead. Taylor's ex-boyfriend was the focus of a narcotics investigation that led officers to execute the warrant on her apartment, where no drugs were found.

The grand jury's decision means no one was criminally charged with killing Taylor, a 26-year-old Black emergency room technician and aspiring nurse.

Wanton endangerment, a Class D felony, is the lowest of four classes of felonies in Kentucky law. The maximum sentence is five years; the minimum is one year.

An attorney for Taylor's family, Ben Crump, said the charges should have been "wanton murder." A murder charge, a Class A felony, carries a sentence of up to 50 years or life, and a minimum sentence of 20 years.

As Palmer wiped away her tears, she was embraced by Austin and Baker who attempted to comfort her.

Baker described it as a "tough" situation and said they were "just loving on each other as a family."

"We didn't fathom that it would be a situation where they would indict on charges against the neighbors and absolutely nothing on Breonna," she said.

After Cameron's announcement, Kentucky Gov. Andy Beshear and Louisville Mayor Greg Fischer called for the release of any public information that would not jeopardize the ongoing investigations with the case. The governor also activated members of the Kentucky National Guard and Kentucky State Police to work in Louisville as the streets quickly filled with demonstrators.

The grand jury's ruling sparked protests as thousands walked the streets crying for justice from the afternoon hours well into the night in Chicago, New York City, Philadelphia and Washington DC. Two Louisville police officers were shot Wednesday night before the countywide curfew, from 9 p.m. to 6:30 a.m. local time.

'Low expectations of the system'

Cameron said on Wednesday that bullets fired by Officer Myles Cosgrove and Sgt. Jon Mattingly were in response to the single shot fired by Taylor's boyfriend, Kenneth Walker III. Walker, who was legally armed, admitted that he fired one shot and was the first to shoot, Cameron said. That created legal challenges, the Kentucky attorney general said, because of the Castle Doctrine -- a form of self-defense like the stand your ground law -- allowed for them to protect themselves.

Cosgrove and Mattingly are still on administrative reassignment.

Hankison is accused of blindly firing 10 rounds that went through another apartment where Chelsey Napper, Cody Etherton and their elementary-school aged child lived. The neighbors, labeled as the victims in the indictment, filed a civil lawsuit against the officers.

"There is no conclusive evidence that any bullets fired from Detective Hankison's weapon struck Ms. Taylor ... ballistics analysis did not identify which of the three officers fired the fatal shot" that killed Taylor, Cameron said.

Johnson called Cameron's decision a "political tightrope that shows something was done," but ultimately falls short of justice.

"We, African Americans, don't expect much from the system," Johnson said. "We participate in the system and fund the system with our tax dollars, but we have low expectations of the system to work for us."

Walker's attorney, Steve Romines, said the Castle Doctrine doesn't apply when you're Black -- and it involves the police.

"If you have a self-defense claim over a death, you still get indicted. You present that to a jury, they decide if there's a reasonable doubt of your guilt," Romines said. "Police are the only people that just get declared justified without having to present it to a jury."

Brandon Lawrence, a civil attorney for the neighbors tied to the indictment said he doesn't know what factored into the grand jury's decision, but knows his clients were affected by what happened.

"I am disappointed that no one was charged in the death of Breonna Taylor as well as anyone else that was affected by what happened that night," Lawrence said. "But we are pleased that Hankison is going to have to face charges for what he did."

Walker, Napper and Etherton did not testify in the grand jury, their attorneys told CNN.

Finding some form of justice

The city of Louisville agreed to pay Palmer, Taylor's mother, a $12 million settlement in a wrongful death lawsuit she filed against all three officers. Sweeping police reforms were attached to the financial settlement, which is the highest ever paid in Louisville. Prior to the agreement, the Louisville metro council unanimously voted to pass an ordinance called "Breonna's Law," banning no-knock search warrants.

But Baker said that this is not the end.

"America will find out what happened to Breonna Taylor," Baker told CNN.

There is a federal investigation into whether Taylor's civil rights were violated, and Baker sees that with some optimism.

"We really hope the FBI brings the justice we were denied today," she said.

Meanwhile, Aguiar and Baker are teaming up with Romines on Walker's civil lawsuit and they believe it will allow them to unearth critical details about the shooting.

"That's our hope," Romines said. "There are only certain remedies in civil litigation, so we have to evaluate whatever happens, but we want to the truth come out."

CORRECTION: An earlier version of this story incorrectly identified two of Tamika Palmer's family members who were with her when she learned of the grand jury decision.