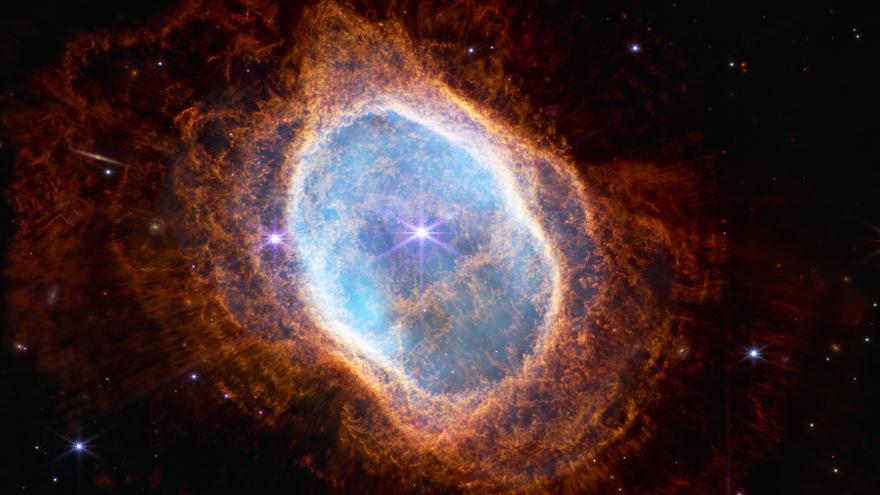 (CNN) -- If you have ever watched "It's a Wonderful Life," the film has an unexpected cosmic cameo.

A group of angels listening for prayers is actually Stephan's Quintet, a compact galaxy group discovered in 1877. The galaxies interlock in a dance 290 million light-years away from Earth.

Astronomers and space enthusiasts have waited for Webb's debut for decades. When US President Joe Biden released the first high-resolution image on Monday, and NASA unveiled the rest a day later, it felt like the entire planet came together to marvel at them.

And the observatory's scintillating journey is just beginning.

The Webb images show how the infrared observatory can peer through space's dusty environment to uncover unseen aspects of the universe.

The glistening dots in the first image, the deepest infrared image of the distant universe yet, represent thousands of galaxies. Humankind has never seen some of these faint, far-off systems before.

Previously invisible areas of star birth glow in Webb's image of the Carina Nebula, which resembles a Van Gogh painting. Meanwhile, the dramatic death of a star plays out in the Southern Ring Nebula.

And clouds float within the hazy, hot atmosphere of a giant exoplanet more than 1,000 light-years away.

Ocean worlds may be the most promising place to look for life beyond Earth -- and there are quite a few to choose from in our cosmic backyard.

Jupiter's moon Europa and Saturn's moons Titan and Enceladus may harbor oceans beneath their thick, icy surfaces. Planning is underway for multiple missions to visit these intriguing destinations over the next decades.

Meanwhile, visionary minds at NASA's Jet Propulsion Laboratory in Pasadena, California, have come up with some concepts for robots that could explore these worlds in ways akin to science fiction. An underwater rover that rolls upside down against the ice's underside, a steam-powered hopping robot and cell phone-size swimming bots are just some of the prototype ideas.

Explore our interactive map of planets and moons where scientists want to send robotic missions in the search for life across our solar system.

Sequencing of ancient DNA has solved the identity of human fossils found decades ago in a cave in China's Yunnan province.

Primitive aspects of a partial skull and thigh bone, unearthed in 1989 from Red Deer Cave, had caused scientists to question whether the specimens represented a previously unknown group of early humans.

Now, genetic material from the skull cap has shown it belonged to a female member of Homo sapiens, rather than an archaic human species.

Furthermore, the analysis genetically linked the woman to the East Asian ancestry of Native Americans. It's possible that this group traveled to Siberia and across the Bering Strait, becoming some of the first Americans.

Astronomers have detected a mysterious radio burst in space with a pattern similar to a heartbeat.

Typically, these bursts release a bright flash of radio waves that only lasts for a few milliseconds, and they have no known cause.

The new radio burst lasted for three seconds, about 1,000 times longer than normal, and it had "periodic peaks" every 0.2 seconds like a beating heart.

The origin of this burst, which likely came from a galaxy about a billion light-years away, is unknown -- but astronomers have several ideas about what created this celestial lighthouse.

Blue whales, the largest animals on the planet, are the gentle giants of the deep and have no predators.

But these massive marine mammals are washing up on the Pacific coast of Patagonia at the southern tip of South America. Postmortems have shown that individuals died after having collided with a ship due to heavy ocean traffic from industrial salmon farming.

"People don't realize how much of a global problem it is. These charismatic animals -- everyone loves whales -- they've actually become the ocean's roadkill," said Susannah Buchan, an oceanographer at the University of Concepción in Chile.

Learn more about these charismatic creatures during Sunday's episode of the CNN Original Series "Patagonia: Life on the Edge of the World" at 9 p.m. ET. The six-part series premiered last Sunday, and every new episode will be available on CNNgo the day after it airs on television. You can also access CNNgo in our CNN app.

Dive into these worthy explorations for weekend reading:

-- For the first time, archaeologists are excavating a 5,000-year-old tomb in the English countryside -- and it has ties to the legend of King Arthur.

-- The Perseverance rover is scouting sites on Mars that could serve as the first launchpad from another planet for future missions that will return Martian samples to Earth.

-- A small, centuries-old bronze artifact at the Cincinnati Art Museum turned out to be a "magic mirror" with a reflection that reveals a detailed hidden image.