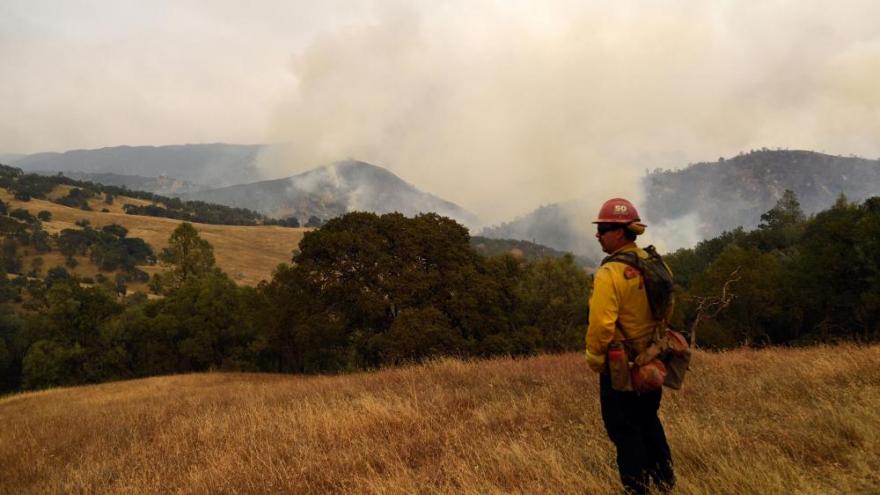 The SCU and LNU lightning Complex Fires were the third and fourth largest wildfires in California's history.

(CNN) -- The weather forecast for the next few days and into next week doesn't provide much hope for fire-ravaged California.

So even though two of the largest fires in California's history are now fully contained, firefighters are still battling two other blazes that have scorched more than 100,000 acres and no relief is in sight.

High heat is expected in Southern California, including Los Angeles and San Diego on Friday. And strong winds along with the heat and dry conditions will make for elevated fire conditions, according to CNN's meteorologist Rob Shackelford.

The SCU and LNU lightning Complex Fires that are now contained were the third and fourth largest wildfires in California's history, charring an area close to the size of Rhode Island. They burned for more than six weeks before firefighters were able to bring them to 100% containment.

2 major fires are out of control

Now, two major wildfires are raging out of control in Northern California. The Glass Fire has scorched more than 60,000 acres and the Zogg Fire has burnt more than 55,000 acres and killed at least four people. The causes of both fires are under investigation.

The Glass Fire in Sonoma and Napa counties is now 61,150 acres and 8% contained, Cal Fire said. Nearly 17,000 Sonoma County residents have been evacuated because of the flames, county officials said Friday. About 17,500 residents are under an evacuation warning.

The Zogg Fire, burning in Northern California's Shasta and Tehama counties, is 56,168 acres and is now 56% contained, fire officials said.

"Firefighters had another successful day that increased containment," Cal Fire said in a Friday news release. "The fire had minimal growth in size today."

The fire has destroyed 170 structures, damaged 23 and is threatening more than 100 others.

California has had a terrifying fire season this year. Wildfires have devoured millions of acres of land and people in the state have had to flee, leaving behind their homes and memories. They say they are devastated and tired from constantly having to deal with wildfires year after year.

"It's like we can't run away," resident Jan Zakin told CNN.

More than 2,000 firefighters have been relentlessly battling the blazes in Northern California for the past week. Only 6% of the Glass Fire is contained, Cal Fire said.

Temperatures will get better going into next week. But, with no rain forecast for much of the western half of the country, little to no relief is expected over the next seven days, Shackelford said. Heat advisories are posted for 25 million people in California, including Los Angeles and San Francisco.

Currently 76% of the West is under drought conditions, and no rainfall is expected until the end of next week, according to Shackelford.

This year, over 8,100 wildfires have burned nearly four million acres, according to Cal Fire. Nearly 100,000 people have been evacuated across the state and 30 people have died.

The Glass Fire has scorched Sonoma and Napa counties, destroying over 500 structures, according to Cal Fire. Sonoma County Supervisor Susan Gorin expressed her concerns over the vineyards affected by the blaze.

"The fruit on the vines are going to be left to rot," Gorin said. "They are smoke-tainted."

The fire has also destroyed dozens of homes and businesses in Sonoma County and Napa County. And thousands of residents are under evacuation orders as their homes are in the danger zone.

"Fire activity is expected to increase as the red flag warning takes effect across the region," according to Cal Fire.

Record high temperatures and northwest winds are making things worse for the firefighters who are battling the blaze.

The heat advisory is creating challenging conditions for those on the frontlines of this fire, Sonoma County officials said on Thursday. The red flag warning for the area will remain in effect until Saturday morning.

But, in Southern California, fire officials say the Bobcat Fire is slowing down.

"The Bobcat Fire, after three weeks of hard work, is winding down. There are just a few areas left with interior fire activity," according to US Forest Service officials. The fire burned a nearly 115,000-acre swath across the Angeles National Forest and is 79% contained.