Wearing masks could save more than 100,000 US lives through February, new study suggests 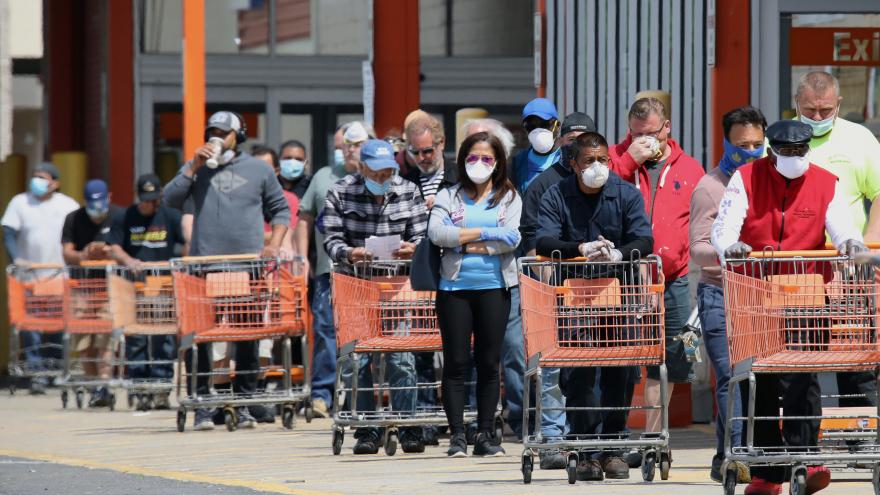 (CNN) -- If 95% of Americans wore masks in public, more than 100,000 lives could be saved from Covid-19 through February, a new modeling study suggests.

The study -- from the Covid-19 forecasting team at the University of Washington's Institute for Health Metrics and Evaluation -- notes that, in September, only about 49% of US residents reported that they "always" wear a mask in public.

If mask-wearing is 49% through February and states continue with removing social distancing mandates, the Covid-19 death toll across the United States could reach about 1 million deaths by February 28, according to the study, published in the journal Nature Medicine on Friday.

Yet under the assumption that states shut down when their daily death rate exceeds 8 deaths per 1 million people in the population but mask-wearing doesn't change, the study's model projections forecast the death toll could reach 511,373 deaths by February 28.

The scenario that 95% of people in each state wear masks -- in addition to states reinstating social distancing mandates if their daily death rates exceed 8 deaths per 1 million people -- resulted in the lowest death toll projection, with 381,798 deaths by February 28, according to the study.

For the study, the researchers analyzed data on Covid-19 cases and deaths in the United States from February 1 through September 21. That analysis -- along with other factors, such as pneumonia seasonality, testing rates and mask use -- helped inform model projections for the course of the pandemic through February 28.

The study had some limitations, including that the findings are only forecast projections from models and not definitive about what the future holds -- and mask wearing tends to fluctuate, so the 49% figure used in the study appears to now be outdated.

IHME Director Dr. Chris Murray also emphasized during a virtual press briefing on Friday that the institute's weekly modeling projections provide more updated data than what is provided in the study. However, the study still helps offer insight into how mask-wearing can make a difference.

"We think the key point here is that there's a huge winter surge coming and our models have been showing that for many months," Murray said on Friday.

"You can see in the paper what universal masks can do and they blunt quite a bit of the surge or delay it," he said. "I think it's very difficult at the point where we are in the US -- where there's so much community transmission of the virus -- to prevent some fall winter surge, but we can certainly make it much smaller."

Murray said that "the long-range view" provided in the study "is very important for helping decision-makers -- governors, federal government, other actors -- think about what we need to do."

On Thursday night, in separate projections, IHME's model of the coronavirus pandemic predicted 385,611 coronavirus deaths in the US by February 1 -- slightly fewer than last week's forecast for the same time frame. But the institute says case counts and deaths are up across the US.

"In the last week, the increase in daily cases has become much clearer, and for the first time since early August, daily deaths have begun to rise. We believe that the fall/winter surge has begun, albeit several weeks behind the massive surge in Europe," IHME said in its weekly update.

"The fall/winter surge will intensify in November and December, reaching a peak in January. Many states will face enormous pressure on hospital capacity and will likely have to re-impose some social distancing mandates. The best strategy to delay re-imposition of mandates and the associated economic hardship is to expand mask use."