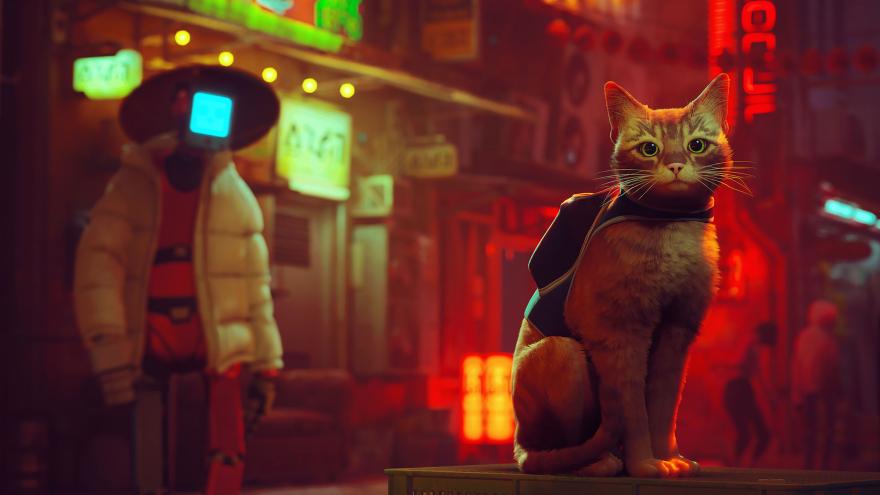 (CNN) -- This week, two of the most passionate communities online — gamers and cat lovers — collided with the release of a new video game that lets you play as an adorable orange tabby cat.

"Stray", created by indie French game company BlueTwelve Studio and published by Annapurna Interactive, was released on Tuesday for PlayStation 4 and 5, and PC. It quickly become an online phenomenon, delightinghumans and cats alike.

We had to know: Was it really the cat's meow? So we tried it out for ourselves, paying $30 to download it for a PlayStation 5. It was quickly apparent why "Stray" appeals to gamers (who like cats), people who simply like cats, and actual cats. It's beautifully animated and offers a respite from video games that are often noisy and action-packed. Also, playing as a cat is unusual and amusing. You might even call it a-meow-zing.

Though the dystopia of the game — which mostly takes place in a city that's falling apart — can have a mournful, solitary feel, the adventure (and the choice of main character) served as a welcome distraction from some of the dystopian headlines we have in our own world: As we played, wildfires and heat waves raged on multiple continents, but for a little while we were just a ginger cat wandering around a strange city.

The game begins in a gorgeous, peaceful, leafy space that looks like the remains of urban infrastructure. You control the main character, who is quickly separated from its feline family, falling into a seemingly deserted city far below.

From there, "Stray" gets a little confusing. It's clear that some sort of major disruptive event took place in this city, and the game is focused on solving the mystery of what happened and getting back home. As you soon realize, the city is not totally deserted: There are no humans, but there is a little drone robot called B-12 that helps you read signs and piece together what's going on in your new surroundings; humanoid robots with heads shaped like old-school desktop computers; and tick-like creatures called "Zurks" that will occasionally attack and try to kill you.

Other than a periodic frenzy of excitement, most of your time is spent exploring much like a cat would: figuring out what surfaces you can jump on, what items you can pick up or knock over, and what kinds of cat behaviors you can engage in. There is, of course, a dedicated "meow" button.

What struck us about the game is the balance between having specific tasks or objectives and allowing users to explore freely. One of us doesn't play video games at all, while the other is somewhat more familiar, yet "Stray" catered to both our interests and skill levels. Overall, it was fun to figure out even though it took some time to, uh, purrfect our gameplay.

"It was an intention to have it minimal, but to make sure that everything necessary was there to make sure that the game was still accessible," BlueTwelve producer Swann-Martin Raget said in an interview with CNN Business. "You understand naturally without thinking too much and without necessarily being part of a ... quest or a list of challenges."

Laine Nooney, an assistant professor at New York University who studies media and video games, attributed the sudden popularity of "Stray" to several qualities: It has an endearing story, is well-crafted, is pleasant to play, and includes the internet's "unofficial mascot".

"Playing as an animal allows us to put our human brain 'to rest' in a sense," Nooney said. "Even though we're trying to get this cat through a scary world, the stakes are small and manageable — a welcome relief from an increasingly chaotic news cycle."

Furtunately, we did, in fact, feel a little more relaxed while playing the game. In part, that's due to its pace, which only goes as fast as a cat can meander through a desolate cityscape, occasionally stopping to lap up some water or take a catnap. It was also a result of small, thoughtful details in the game: just repeatedly hitting the "meow" button on the handheld controller, scratching tree bark, or nuzzling other kitties was calming.

The real cat behind "Stray"

Why make the game's main protagonist a cat, specifically? According to Raget, the decision was driven by several factors.

The first was the nature of the universe the game takes place in. The dystopian city in "Stray" is inspired by the Kowloon Walled City, a settlement in Hong Kong that was considered the most densely populated place on Earth before it was demolished over two decades ago.

Yet while Kowloon Walled City was inhabited by people, BlueTwelve's two cofounders, both artists, "started to realize that it was really the perfect playground for cats — the amount of small passages, the fresh point of views that it was giving on the world they were building," Raget said.

Perhaps more importantly, the BlueTwelve team is obsessed with cats. The studio's office in the south of France has two full-time in-house feline executives ("Sometimes they turn off our computers when we're about to save our work," Raget said) and most of the studio's employees own and love cats.

In fact, the protagonist of "Stray" is largely based on Murtaugh, a stray cat BlueTwelve's cofounders found and adopted several years ago.

Humans aren't the only fans

BlueTwelve's passion for felines is echoed by consumers, who have taken to "Stray" like catnip. It's among the most popular games on Steam, one of two platforms where it is available — nearly 50,000 people played it on Thursday, just two days after it launched, and over 21,000 of those who bought the game from Steam left "Overwhelmingly Positive" reviews.

"If you want to be a cat, playing Stray is the next best thing," one review read.

Sony's PlayStation, the other platform where "Stray" is available (and the one where we purchased and played it), did not respond to a question about how many copies of the game it has sold thus far, and BlueTwelve declined to share sales data. (Asked about sales via its platform, Steam told CNN Business to contact the game's publisher, Annapurna Interactive; Annapurna Interactive declined to comment.)

BlueTwelve, which was formed a little over five years ago with the express purpose of creating this game, hasn't yet thought about what its next project might be.

Right now, Raget says, they are just "overwhelmed" by the response to "Stray."

Humans aren't the only fans of the game. Since "Stray" launched earlier this week, social media has been full of pet cats fascinated by their onscreen orange counterpart. (No word yet on whether any of them hit the paws button.)

BlueTwelve realized early on that "Stray" might have that effect, thanks to its in-house cats, Miko and Jun.

"When the cats in the office started to react to what was happening on our screens, I think we kind of felt that we were going in a good direction," Raget said.