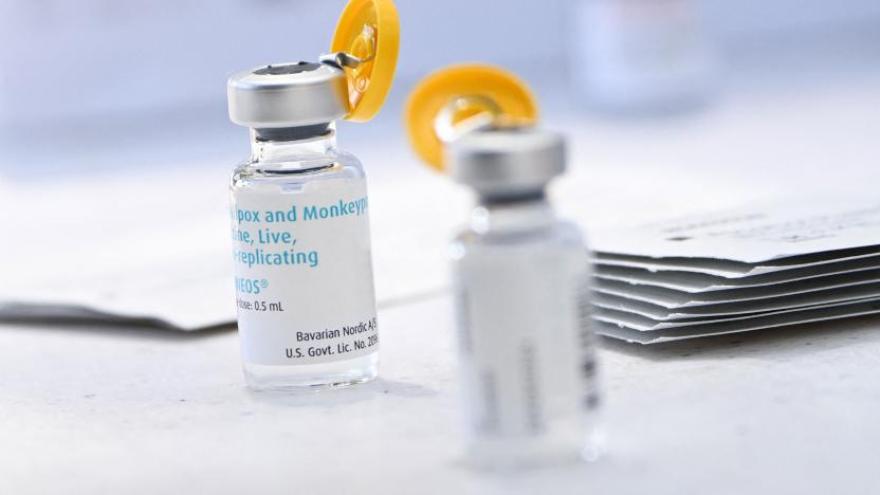 Vials of the JYNNEOS Monkeypox vaccine are prepared at a pop-up vaccination clinic in Los Angeles, California, on August 9. An official on the White House monkeypox response team is defending the Biden administration's actions as the outbreak worsens.

(CNN) -- A top official on the White House monkeypox response team on Friday sought to defend the Biden administration's actions as the outbreak worsens but did not offer substantive explanations for why it is taking so long to get the spread under control, casting the response as reactive to the disease's trajectory.

"The contour of the outbreak is what dictated action," White House deputy monkeypox response coordinator Dr. Demetre Daskalakis said during an interview on "At This Hour" with CNN's Boris Sanchez. "So I think the epidemiology of the outbreak really led to the emergency declaration and also the steps to add a new coordination team with myself and (White House monkeypox response coordinator) Bob Fenton."

The Biden administration declared monkeypox a public health emergency on August 4 after facing criticism for not moving faster to address the crisis.

Daskalakis said Friday: "We know what we've got in terms of this outbreak. It is acting differently than any monkeypox outbreak we've seen before. It's clear the epidemiology, it's clear what strategies need to be implemented to be able to control the outbreak, and it's also clear which populations we need to focus on. So I think, really, it's more about the right time as opposed to there being a delay."

His comments come a day after the administration announced new steps to accelerate the US response to the spread of monkeypox amid high demand for vaccines and treatments.

That includes boosting supply with an additional 1.8 million doses of the Jynneos monkeypox vaccine, accelerating the US Department of Health and Human Services' vaccine distribution timeline. HHS is also launching a new program aimed at making vaccines available and engaging with at-risk communities at large events attracting LGBTQ communities. And the administration is pre-positioning doses of an antiviral treatment for individuals who test positive.

The details, compiled in a White House fact sheet, were shared first with CNN.

More than 14,000 monkeypox cases had been reported in the United States as of Thursday afternoon, according to the latest data from the US Centers for Disease Control and Prevention, with more than 40,000 confirmed cases worldwide. There have been zero deaths in the US. Most monkeypox cases in the current outbreak have been linked to sexual activity.

According to CDC guidance, "monkeypox can spread to anyone" through close contact, which is often skin-to-skin, as well as intimate contact that includes sex, hugging, massaging and kissing. Men who have sex with men are at high risk of contracting the virus.

Pressed by Sanchez on Friday on the criticism that the administration did not move quickly enough, Daskalakis said that the outbreak was "approached with great urgency" and that the response has been "characterized by a lot of pivots," which he described as learning about how the virus spread and shifting the vaccine strategy as supply did not immediately meet the high demand.

He touted the "great amount of safety" with a newly approved approach to administer the vaccine intradermally -- between layers of skin -- which requires a smaller dosage.

But amid concerns from some providers that there hasn't been enough training on how to administer the vaccine this way, Daskalakis said the CDC was "working closely" with jurisdictions while acknowledging there has been a "learning curve."

"Definitely, there's a learning curve. But what's exciting is that because of the new intervention of increasing the number of doses we have, they're able to get more vaccines to people and have more vaccine events. ... But I think that we're seeing that the training is working and the folks are implementing on the ground in a way that is, I think, really going to help us move toward more shots in arms and more people protected from the immunological perspective," he said.

Daskalakis dismissed the idea of invoking the Defense Production Act to get more vaccine supply, suggesting there were other ways to boost vaccines.

"A lot of other strategies are currently being looked at that will accelerate vaccine supply. So including ideas of domestic fill and finish of a vaccine. So that's really a space to watch closely. I think you're going to hear on news as we go forward. But I think at this point, I think we have strategies that will actually increase production using mechanisms that we already will be able to get in place without invoking that Act at this time," he said.