'We just wanted to be together,' says Ukrainian couple who rushed to marry amid attacks 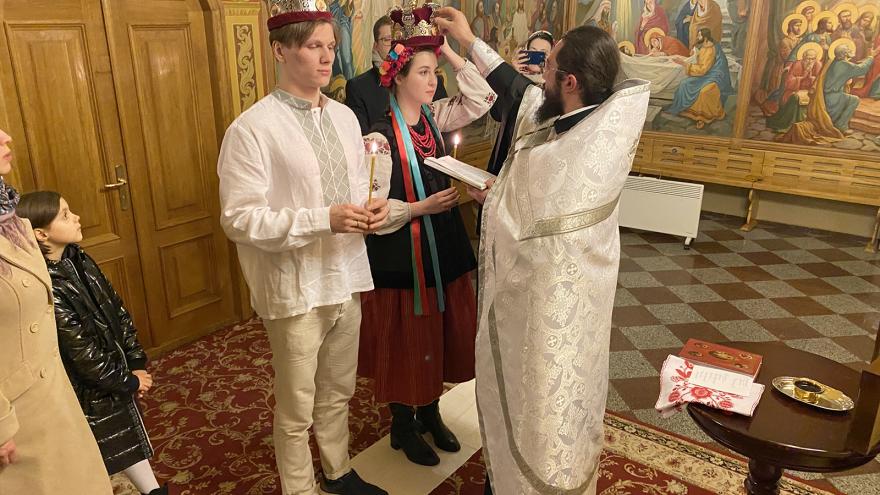 (CNN) -- It was not the wedding day they envisaged, but as Russia attacked their country Thursday Yaryna Arieva and her partner Sviatoslav Fursin rushed to tie the knot with the sound of air raid sirens ringing in their ears.

"It's the happiest moment of your life, and you go out, and you hear that," Arieva, a deputy on the Kyiv City Council, said.

The couple had planned to get married on May 6 and celebrate at a restaurant with a "very, very cute terrace" overlooking the Dnieper river, said Arieva.

"Just us and the river and beautiful lights,"the 21-year-old said.

But all that changed when Russian President Vladimir Putin announced a military operation in Ukraine early Thursday, and the assault began hours before dawn with a series of missile attacks.

It quickly spread across central and eastern Ukraine as Russian forces attacked the country from three sides, upending the lives of tens of millions of Ukrainians.

'We are going to fight for our land'

The couple, who met in October 2019 at a protest in the center of Kyiv, decided they wanted to get married because they are not sure what their future holds.

"The situation is hard. We are going to fight for our land," said Arieva. "We maybe can die, and we just wanted to be together before all of that."

After their wedding, Arieva and Fursin, 24, a software engineer, prepared to go to the local Territorial Defense Center to join efforts to help defend the country.

Arieva doesn't know what task the couple will be assigned.

"Maybe they will just give us armor and we will go and fight. Maybe we will help with something else. They will decide," she said.

Arieva described her husband as her "closest friend on the Earth" and says she hopes they will be able to celebrate their marriage one day.

"Maybe they (Russia) will just get out from our country and we will have an ability to celebrate normally," said Arieva.