'We just did the right thing.' A group of high school football players rescued an injured woman trapped in her car after a wreck 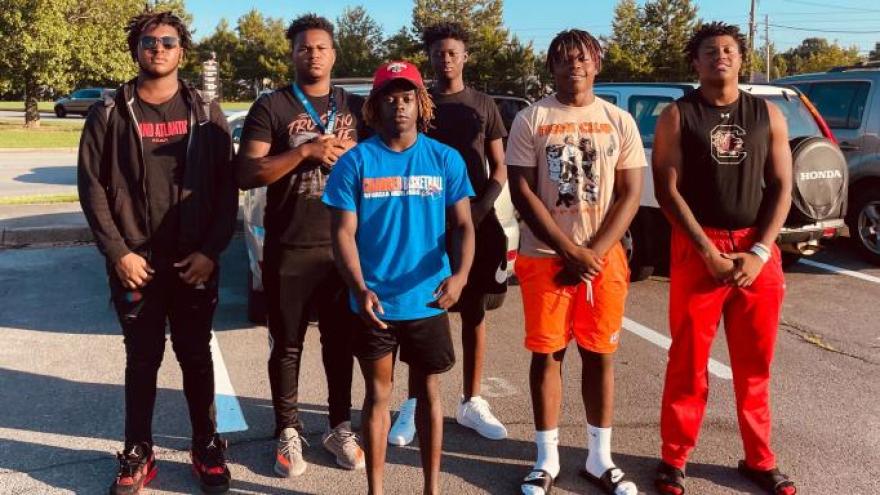 (CNN) -- A group of high school football players in northern Georgia jumped out of their cars while on the way to school to help free an injured woman who was trapped after a wreck.

Treyvon Adams, 16, was driving to school Friday morning with his teammates Antwion Carey, 16, Tyson Brown, 17, and Alto Moore, 16, when they saw the crash. The four are members of the Rome High School football team.

Fellow player Cesar Parker, 16, was in another vehicle with his mother, and got out to help with the rescue. Another student, Messiah Daniels, was also involved.

As soon as the teens saw the car wreck, "we just ran as fast we (could) to the lady and check on her to see if she was alright," Adams told CNN.

They found the woman inside her car, trapped by doors that had been damaged in the crash and wouldn't open.

"We were seeing she was in pain, she was screaming and asking us to help her," Adams said.

A picture posted on Facebook by Rome City Schools shows smoke rising from a wrecked car as the group of players works on freeing the woman.

Luis Goya, a math teacher, told CNN he was working at the school and called 911 when he heard the crash. Meanwhile, the students were trying to free the trapped woman.

"We used all our muscles," Adams said. "We're pretty big people, we're strong. We play football, so we lift weights a lot, but (the door) was just extremely bent and broke."

Together, the teens were able to force the car's passenger side door open, but soon realized they would need to open the driver's side door to be able to free the woman.

It all happened in about a minute, according to Adams. "We were all moving very fast to get her out," he added.

As his teammates helped the woman out of the car, Adams said he went to check on the driver of the other vehicle to make sure they were okay.

The group said they don't know the woman they helped and haven't been in touch since -- but want her to know they hope she's doing okay following the crash.

"We are very proud of them," Goya, the teacher, said. "This is the kind of news that we need, that is more positive."

In a post on Twitter, the school's football team wrote, "PROUD of our MEN!" in reference to the story.

Adams said they have been "getting a lot of love from a lot of different places."

"We've been recognized in a lot of different ways," he said. "We appreciate it, but I feel we just did the right thing."

Rome is roughly an hour northwest of Atlanta.